Question: If you walk on a dry path between two walls a few feet apart, you hear a musical note or “ring” at each footstep. Whence comes this?
Answer: This is similar to phosphorescent paint. Once any sound gets between two parallel reflectors or walls, it bounds from one to the other and never stops for a long time. Hence it is persistent, and when you walk between the walls you hear the sounds made by those who walked there before you. By following a muffin man down the passage within a short time you can hear most distinctly a musical note, or, as it is more properly termed in the question, a “ring” at every (other) step.

Genuine student answer* to an Acoustics, Light and Heat paper (1880), Science and Art Department, South Kensington, London, collected by Prof. Oliver Lodge. Quoted in Henry B. Wheatley, Literary Blunders (1893), 175-6, Question 2. (*From a collection in which Answers are not given verbatim et literatim, and some instances may combine several students' blunders.)

A persistent and age-old instinct makes us want to wander
Into regions yet untrod
And read what is still unread
In the manuscripts of God.

Address upon receiving the Perkin Medal Award, 'The Big Things in Chemistry', The Journal of Industrial and Engineering Chemistry (Feb 1921), 13, No. 2, 163. These lines concluded his remarks, without citation, and since Webmaster has found no other source has assumed the words are his own. Contact Webmaster if you know a different primary source.

Edison was by far the most successful and, probably, the last exponent of the purely empirical method of investigation. Everything he achieved was the result of persistent trials and experiments often performed at random but always attesting extraordinary vigor and resource. Starting from a few known elements, he would make their combinations and permutations, tabulate them and run through the whole list, completing test after test with incredible rapidity until he obtained a clue. His mind was dominated by one idea, to leave no stone unturned, to exhaust every possibility. 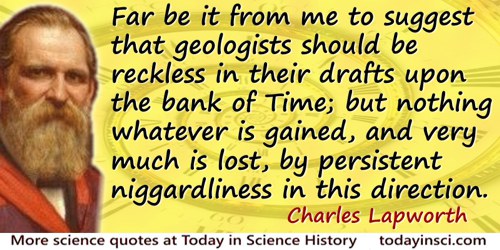 Far be it from me to suggest that geologists should be reckless in their drafts upon the bank of Time; but nothing whatever is gained, and very much is lost, by persistent niggardliness in this direction.

Hence, even in the domain of natural science the aid of the experimental method becomes indispensable whenever the problem set is the analysis of transient and impermanent phenomena, and not merely the observation of persistent and relatively constant objects.

In the year 1692, James Bernoulli, discussing the logarithmic spiral [or equiangular spiral, ρ = αθ]  shows that it reproduces itself in its evolute, its involute, and its caustics of both reflection and refraction, and then adds: But since this marvellous spiral, by such a singular and wonderful peculiarity, pleases me so much that I can scarce be satisfied with thinking about it, I have thought that it might not be inelegantly used for a symbolic representation of various matters. For since it always produces a spiral similar to itself, indeed precisely the same spiral, however it may be involved or evolved, or reflected or refracted, it may be taken as an emblem of a progeny always in all things like the parent, simillima filia matri. Or, if it is not forbidden to compare a theorem of eternal truth to the mysteries of our faith, it may be taken as an emblem of the eternal generation of the Son, who as an image of the Father, emanating from him, as light from light, remains ὁμοούσιος with him, howsoever overshadowed. Or, if you prefer, since our spira mirabilis remains, amid all changes, most persistently itself, and exactly the same as ever, it may be used as a symbol, either of fortitude and constancy in adversity, or, of the human body, which after all its changes, even after death, will be restored to its exact and perfect self, so that, indeed, if the fashion of Archimedes were allowed in these days, I should gladly have my tombstone bear this spiral, with the motto, Though changed, I arise again exactly the same, Eadem numero mutata resurgo.

In 'The Uses of Mathesis', Bibliotheca Sacra, Vol. 32, 516-516. [The Latin phrase simillima filia matri roughly translates as the daughter resembles the mother. Spira mirabilis is Latin for marvellous spiral. The Greek word (?µ???s???) translates as consubstantial, meaning of the same substance or essence (used especially of the three persons of the Trinity in Christian theology). Webmaster]

It is not his possession of knowledge, of irrefutable truth, that makes the man of science, but his persistent and recklessly critical quest for truth.

Life is inseparable from water. For all terrestrial animals, including birds, the inescapable need for maintaining an adequate state of hydration in a hostile, desiccating environment is a central persistent constraint which exerts a sustained selective pressure on every aspect of the life cycle. It has been said, with some justification, that the struggle for existence is a struggle for free energy for doing physiological work. It can be said with equal justification for terrestrial organisms that the struggle for existence is a struggle to maintain an aqueous internal environment in which energy transformations for doing work can take place.

In 'The water economy of seed-eating birds that survive without drinking', Proceedings of the International Ornithological Congress (1972), 15, 237-238.

Mr. [Granville T.] Woods says that he has been frequently refused work because of the previous condition of his race, but he has had great determination and will and never despaired because of disappointments. He always carried his point by persistent efforts. He says the day is past when colored boys will be refused work only because of race prejudice. There are other causes. First, the boy has not the nerve to apply for work after being refused at two or three places. Second, the boy should have some knowledge of mechanics. The latter could be gained at technical schools, which should be founded for the purpose. And these schools must sooner or later be established, and thereby, we should be enabled to put into the hands of our boys and girls the actual means of livelihood.

Now [Michele Besso] has departed from this strange world a little ahead of me. That signifies nothing. For us believing in physicists, the distinction between past, present and future is only a stubbornly persistent illusion.

On one occasion committee members were asked by the chairman, who was also in charge of the project, to agree that a certain machine be run at a power which was ten percent lower than the design value. [Franz Eugen] Simon objected, arguing that design value should mean what it said. Thereupon the chairman remarked, Professor Simon, dont you see that we are not talking about science, but about engineering, which is an art. Simon was persistent: What would happen if the machine were run at full power? It might get too hot. But, Mr. Chairman, came Simons rejoinder, Cant artists use thermometers?

Reality is merely an illusion, albeit a very persistent one.

The art of reasoning consists in getting hold of the subject at the right end, of seizing on the few general ideas that illuminate the whole, and of persistently organizing all subsidiary facts round them.

In 'Presidential Address to the London Branch of the Mathematical Association', Mathematical Gazette (Mar 1913), 7, No. 104, 92.

The most persistent sound which reverberates through mens history is the beating of war drums.

The mystery of life is certainly the most persistent problem ever placed before the thought of man. There is no doubt that from the time humanity began to think it has occupied itself with the problem of its origin and its future which undoubtedly is the problem of life. The inability of science to solve it is absolute. This would be truly frightening were it not for faith.

The radiation of radium was contagious—Contagious like a persistent scent or a disease. It was impossible for an object, a plant, an animal or a person to be left near a tube of radium without immediately acquiring a notable activity which a sensitive apparatus could detect.

The science of our time has attacked but a little department of the field of human disease, but, even so, it spreads its operations very steadily and persistently.