A religion old or new, that stressed the magnificence of the universe as revealed by modern science, might be able to draw forth reserves of reverence and awe hardly tapped by the conventional faiths. Sooner or later such a religion will emerge.

Conventional people are roused to fury by departures from convention, largely because they regard such departures as a criticism of themselves.

Create a vision and never let the environment, other peopleŌĆÖs beliefs, or the limits of what has been done in the past shape your decisions. Ignore conventional wisdom.

Evolutionists sometimes take as haughty an attitude toward the next level up the conventional ladder of disciplines: the human sciences. They decry the supposed atheoretical particularism of their anthropological colleagues and argue that all would be well if only the students of humanity regarded their subject as yet another animal and therefore yielded explanatory control to evolutionary biologists.

Fish farming, even with conventional techniques, changes fish within a few generations from an animal like a wild buffalo or a wildebeest to the equivalent of a domestic cow.

For what is thought to be a ŌĆśsystemŌĆÖ is after all, just conventional, and I do not see how one is supposed to divide up the world objectively so that one can make statements about parts.

I bet it would have been a lot of fun to work with Einstein. What I really respect about Einstein is his desire to throw aside all conventional modes and just concentrate on what seems to be the closest we can get to an accurate theory of nature.

As quoted by Christina Couch, '10 Questions for Alan Guth, Pioneer of the Inflationary Model of the Universe' (7 Jan 2016) on the website for NPR radio program Science Friday.

I despise Birth-Control first because it is ... an entirely meaningless word; and is used so as to curry favour even with those who would first recoil from its real meaning. The proceeding these quack doctors recommend does not control any birth. ... But these people know perfectly well that they dare not write the plain word Birth-Prevention, in any one of the hundred places where they write the hypocritical word Birth-Control. They know as well as I do that the very word Birth-Prevention would strike a chill into the public... Therefore they use a conventional and unmeaning word, which may make the quack medicine sound more innocuous. ... A child is the very sign and sacrament of personal freedom. He is a fresh will added to the wills of the world; he is something that his parents have freely chosen to produce ... he is their own creative contribution to creation.

I have not trodden through a conventional university course, but I am striking out a new path for myself. I have made a special investigation of divergent series in general and the results I get are termed by the local mathematicians as ŌĆ£startling.ŌĆØ

First letter to G.H. Hardy (16 Jan 1913). In Collected Papers of Srinivasa Ramanujan (1927), xxiii. Hardy notes he did ŌĆ£seem to remember his telling me that his friends had given him some assistanceŌĆØ in writing the letter because Ramanujan's ŌĆ£knowledge of English, at that stage of his life, could scarcely have been sufficient.ŌĆØ

In a strange way, Marcion understood the situation better than the more conventional followers of the church, for Lucifer is merely one of the faces of a larger force. Evil is a by-product, a component, of creation.

In 'Who is Lucifer?', The Lucifer Principle: A Scientific Expedition Into the Forces of History (1997), 2.

In natural history, great discovery often requires a map to a hidden mine filled with gems then easily gathered by conventional tools, not a shiny new space-age machine for penetrating previously inaccessible worlds.

It is so hard for an evolutionary biologist to write about extinction caused by human stupidity ... Let me then float an unconventional plea, the inverse of the usual argument ... The extinction of Partula is unfair to Partula. That is the conventional argument, and I do not challenge its primacy. But we need a humanistic ecology as well, both for the practical reason that people will always touch people more than snails do or can, and for the moral reason that humans are legitimately the measure of all ethical questionsŌĆōfor these are our issues, not natureŌĆÖs.

IŌĆÖm convinced that the best solutions are often the ones that are counterintuitiveŌĆöthat challenge conventional thinkingŌĆöand end in breakthroughs. It is always easier to do things the same old way ŌĆ” why change? To fight this, keep your dissatisfaction index high and break with tradition. DonŌĆÖt be too quick to accept the way things are being done. Question whether thereŌĆÖs a better way. Very often you will find that once you make this break from the usual way - and incidentally, this is probably the hardest thing to doŌĆöand start on a new track your horizon of new thoughts immediately broadens. New ideas flow in like water. Always keep your interests broad - donŌĆÖt let your mind be stunted by a limited view.

Mere instruction to memorise data is empty. The attempt to enforce conventional mediocrity on the young is criminal.

As quoted, without citation, in Ronald William Clark, The Life of Bertrand Russell (1976), 423.

One should not wrongly reify ŌĆ£causeŌĆØ and ŌĆ£effect,ŌĆØ as the natural scientists do (and whoever, like them, now ŌĆ£naturalizesŌĆØ in his thinking), according to the prevailing mechanical doltishness which makes the cause press and push until it ŌĆ£effectsŌĆØ its end; one should use ŌĆ£causeŌĆØ and ŌĆ£effectŌĆØ only as pure concepts, that is to say, as conventional fictions for the purpose of designation and communicationŌĆönot for explanation.

Perhaps randomness is not merely an adequate description for complex causes that we cannot specify. Perhaps the world really works this way, and many events are uncaused in any conventional sense of the word. Perhaps our gut feeling that it cannot be so reflects only our hopes and prejudices, our desperate striving to make sense of a complex and confusing world, and not the ways of nature.

Society will pardon much to genius and special gifts; but, being in its nature conventional, it loves what is conventional, or what belongs to coming together. 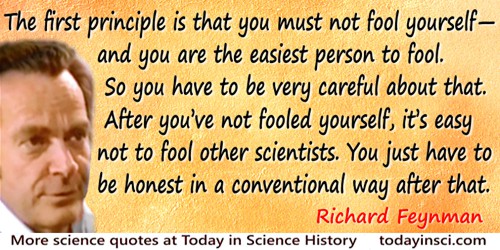 The first principle is that you must not fool yourselfŌĆöand you are the easiest person to fool. So you have to be very careful about that. After youŌĆÖve not fooled yourself, itŌĆÖs easy not to fool other scientists. You just have to be honest in a conventional way after that.

The mediocre mind is incapable of understanding the man who refuses to bow blindly to conventional prejudices and chooses instead to express his opinions courageously and honestly.

The successful researchers are scientists who spend long hours working at the bench, and who do not confine their activities to the conventional but try out novel procedures, therefore they are exposed to the maximum extent to the risk of encountering a fortunate ŌĆ£accidentŌĆØ.

We may see how unexpectedly recondite parts of pure mathematics may bear upon physical science, by calling to mind the circumstance that Fresnel obtained one of the most curious confirmations of the theory (the laws of Circular Polarization by reflection) through an interpretation of an algebraical expression, which, according to the original conventional meaning of the symbols, involved an impossible quantity.