I am among those who think that science has great beauty. A scientist in his laboratory is not only a technician: he is also a child placed before natural phenomena which impress him like a fairy tale. We should not allow it to be believed that all scientific progress can be reduced to mechanisms, machines, gearings, even though such machinery has its own beauty.

In general, scientific progress calls for no more than the absorption and elaboration of new ideasand this is a call most scientists are happy to heed.

In Werner Heisenberg and Arnold J. Pomerans (trans.), Physics and Beyond: Encounters and Conversations (1971), 70.

In honoring the Wright Brothers, it is customary and proper to recognize their contribution to scientific progress. But I believe it is equally important to emphasize the qualities in their pioneering life and the character in man that such a life produced. The Wright Brothers balanced sucess with modesty, science with simplicity. At Kitty Hawk their intellects and senses worked in mutual support. They represented man in balance, and from that balance came wings to lift a world.

Speech, quoted in Leonard Mosley, Lindbergh (2000), 347. In 1949, Lindbergh gave a speech when he received the Wright Brothers Memorial Trophy.

Later scientific theories are better than earlier ones for solving puzzles in the often quite different environments to which they are applied. That is not a relativist's position, and it displays the sense in which I am a convinced believer in scientific progress.

No history of civilization can be tolerably complete which does not give considerable space to the explanation of scientific progress. If we had any doubts about this, it would suffice to ask ourselves what constitutes the essential difference between our and earlier civilizations. Throughout the course of history, in every period, and in almost every country, we find a small number of saints, of great artists, of men of science. The saints of to-day are not necessarily more saintly than those of a thousand years ago; our artists are not necessarily greater than those of early Greece; they are more likely to be inferior; and of course, our men of science are not necessarily more intelligent than those of old; yet one thing is certain, their knowledge is at once more extensive and more accurate. The acquisition and systematization of positive knowledge is the only human activity which is truly cumulative and progressive. Our civilization is essentially different from earlier ones, because our knowledge of the world and of ourselves is deeper, more precise, and more certain, because we have gradually learned to disentangle the forces of nature, and because we have contrived, by strict obedience to their laws, to capture them and to divert them to the gratification of our own needs.

Now the American eagle is verging on extinction. Even the polar bear on its ice floes has become easy game for flying sportsmen. A peninsula named Udjung Kulon holds the last two or three dozen Javan rhinoceroses. The last known herd of Arabian oryx has been machine-gunned by a sheik. Blue whales have nearly been harpooned out of their oceans. Pollution ruins bays and rivers. Refuse litters beaches. Dam projects threaten Colorado canyons, Hudson valleys, every place of natural beauty that can be a reservoir for power. Obviously the scientific progress so alluring to me is destroying qualities of greater worth. 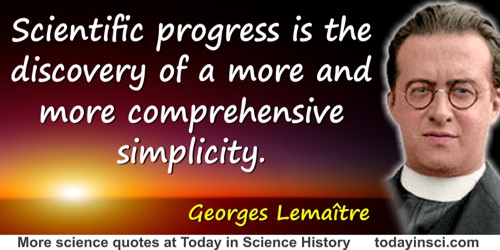 Scientific progress is the discovery of a more and more comprehensive simplicity... The previous successes give us confidence in the future of science: we become more and more conscious of the fact that the universe is cognizable.

Sir Hermann Bondi once wrote that so-called scientific progress does not consist so much in an advancement in science but rather in taking something that beforehand was not science and making it become a part of science itself.

As stated, without quotation marks, in Vittorio Mathieu and Paolo Rossi, Scientific Culture in the Contemporary World (1979), 3.

The gentleman [Mr. Taber] from New York says [agricultural research] is all foolish. Yes; it was foolish when Burbank was experimenting with wild cactus. It was foolish when the Wright boys went down to Kitty Hawk and had a contraption there that they were going to fly like birds. It was foolish when Robert Fulton tried to put a boiler into a sail boat and steam it up the Hudson. It was foolish when one of my ancestors thought the world was round and discovered this country so that the gentleman from New York could become a Congressman. (Laughter.) ... Do not seek to stop progress; do not seek to put the hand of politics on these scientific men who are doing a great work. As the gentleman from Texas points out, it is not the discharge of these particular employees that is at stake, it is all the work of investigation, of research, of experimentation that has been going on for years that will be stopped and lost.

Speaking (28 Dec 1932) as a member of the 72nd Congress, early in the Great Depression, in opposition to an attempt to eliminate a small amount from the agricultural appropriation bill. As quoted in 'Mayor-Elect La Guardia on Research', Science (1933), New Series, 78, No. 2031, 511.

The nineteenth century will ever be known as the one in which the influences of science were first fully realised in civilised communities; the scientific progress was so gigantic that it seems rash to predict that any of its successors can be more important in the life of any nation.

From Inaugural Address as President of the British Association, published Nature (10 Sep 1903),439. (Lockyer was editor of the journal at the time.)

Theories cannot claim to be indestructible. They are only the plough which the ploughman uses to draw his furrow and which he has every right to discard for another one, of improved design, after the harvest. To be this ploughman, to see my labours result in the furtherance of scientific progress, was the height of my ambition, and now the Swedish Academy of Sciences has come, at this harvest, to add the most brilliant of crowns. 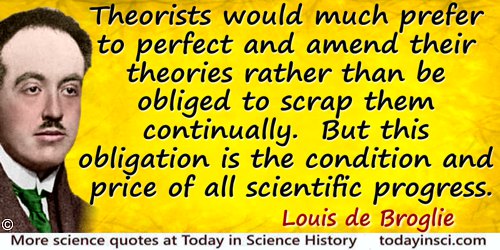 Thus with every advance in our scientific knowledge new elements come up, often forcing us to recast our entire picture of physical reality. No doubt, theorists would much prefer to perfect and amend their theories rather than be obliged to scrap them continually. But this obligation is the condition and price of all scientific progress.

We are like the explorers of a great continent, who have penetrated its margins in most points of the compass and have mapped the major mountain chains and rivers. There are still innumerable details to fill in, but the endless horizons no longer exist.

Stating his belief that within a generation or two, scientific progress was likely to halt. In Presidential Address (28 Dec 1970) to the American Association for the Advancement of Science. 'Science: Endless Horizons or Golden Age?', Science (8 Jan 1971), 171, No. 3866, 24. Quoted in obituary by Douglas Martin, New York Times (20 Jan 2005).