If, then, the motion of every particle of matter in the universe were precisely reversed at any instant, the course of nature would be simply reversed for ever after. The bursting bubble of foam at the foot of a waterfall would reunite and descend into the water; the thermal motions would reconcentrate their energy, and throw the mass up the fall in drops re-forming into a close column of ascending water. Heat which had been generated by the friction of solids and dissipated by conduction, and radiation, and radiation with absorption, would come again to the place of contact, and throw the moving body back against the force to which it had previously yielded. Boulders would recover from the mud materials required to rebuild them into their previous jagged forms, and would become reunited to the mountain peak from which they had formerly broken away. And if also the materialistic hypothesis of life were true, living creatures would grow backwards, with conscious knowledge of the future but no memory of the past, and would become again unborn.

In 1905, a physicist measuring the thermal conductivity of copper would have faced, unknowingly, a very small systematic error due to the heating of his equipment and sample by the absorption of cosmic rays, then unknown to physics. In early 1946, an opinion poller, studying Japanese opinion as to who won the war, would have faced a very small systematic error due to the neglect of the 17 Japanese holdouts, who were discovered later north of Saipan. These cases are entirely parallel. Social, biological and physical scientists all need to remember that they have the same problems, the main difference being the decimal place in which they appear.

In general, scientific progress calls for no more than the absorption and elaboration of new ideasand this is a call most scientists are happy to heed.

In Werner Heisenberg and Arnold J. Pomerans (trans.), Physics and Beyond: Encounters and Conversations (1971), 70.

Our knowledge of stars and interstellar matter must be based primarily on the electromagnetic radiation which reaches us. Nature has thoughtfully provided us with a universe in which radiant energy of almost all wave lengths travels in straight lines over enormous distances with usually rather negligible absorption.

The absorption of oxygen and the elimination of carbon dioxide in the lungs take place by diffusion alone. There is no trustworthy evidence of any regulation of this process on the part of the organism.

Krogh summing up his results related to a quote from The Mechanism of gas Exchange (1910), 257, as cited by E. Snorrason, 'Krogh, Schack August Steenberg', in Charles Coulton Gillispie (ed.), Dictionary of Scientific Biography (1973), Vol 7, 502. 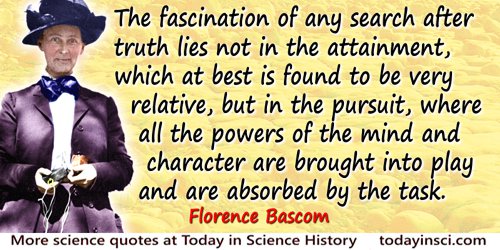 The fascination of any search after truth lies not in the attainment, which at best is found to be very relative, but in the pursuit, where all the powers of the mind and character are brought into play and are absorbed by the task. One feels oneself in contact with something that is infinite and one finds joy that is beyond expression in sounding the abyss of science and the secrets of the infinite mind.

In Isabel Fothergill Smith, The Stone Lady: a Memoir of Florence Bascom (1981). Cited in Earth Sciences History: Journal of the History of the Earth Sciences Society (992), Vols. 11-12, 39.

To make still bigger telescopes will be useless, for the light absorption and temperature variations of the earths atmosphere are what now limits the ability to see fine detail. If bigger telescopes are to be built, it will have to be for use in an airless observatory, perhaps an observatory on the moon.

We take for granted the need to escape the self. Yet the self can also be a refuge. In totalitarian countries the great hunger is for private life. Absorption in the minutiae of an individual existence is the only refuge from the apocalyptic madhouse staged by maniacal saviors of humanity.

Originating the names for these two types of radiation. In 'Uranium Radiation and the Electrical Conduction Produced by It', Philosophical Magazine (1899), 47, 116.