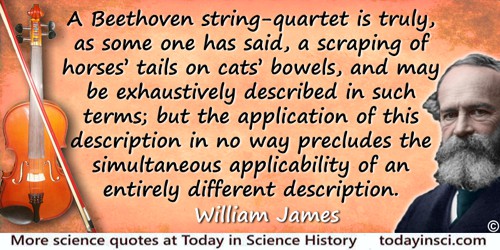 Ultima se tangunt. How expressive, how nicely characterizing withal is mathematics! As the musician recognizes Mozart, Beethoven, Schubert in the first chords, so the mathematician would distinguish his Cauchy, Gauss, Jacobi, Helmholtz in a few pages.

A mathematician will recognise Cauchy, Gauss, Jacobi or Helmholtz after reading a few pages, just as musicians recognise, from the first few bars, Mozart, Beethoven or Schubert.

How fortunate for civilization, that Beethoven, Michelangelo, Galileo and Faraday were not required by law to attend schools where their total personalities would have been operated upon to make them learn acceptable ways of participating as members of the group. 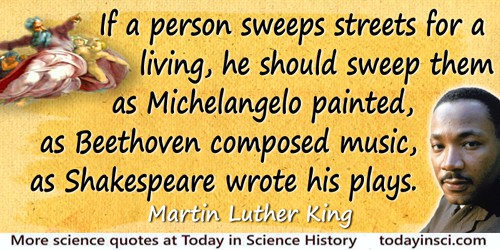 It would be possible to describe absolutely everything scientifically, but it would make no sense. It would be without meaning, as if you described a Beethoven symphony as a variation of wave pressure.

Attributed to Einstein by Frau Born. Paraphrased words as given in Ronald William Clark, Einstein (1984), 243.

May not Music be described as the Mathematic of sense, Mathematic as Music of the reason? the soul of each the same! Thus the musician feels Mathematic, the mathematician thinks Music, Music the dream, Mathematic the working life each to receive its consummation from the other when the human intelligence, elevated to its perfect type, shall shine forth glorified in some future Mozart-Dirichlet or Beethoven-Gauss a union already not indistinctly foreshadowed in the genius and labours of a Helmholtz!

In paper read 7 Apr 1864, printed in 'Algebraical Researches Containing a Disquisition On Newtons Rule for the Discovery of Imaginary Roots', Philosophical Transactions of the Royal Society of London (1865), 154, 613, footnote. Also in Collected Mathematical Papers, Vol. 2, 419.

Modern war, even from the consideration of physical welfare, is not creative. Soldiers and civilians alike are supposed to put on mental khaki.  War means the death of that fertile war which consists of the free, restless conflict of ideas. The war which matters is that of the scientist with nature; of the farmer with the tawny desert; of  philosopher against  mob stupidity. Such war is creative.  Inventions that further life and joy; freedom; new knowledge, whether Luther Burbanks about the breeding of fruits or Einstein's about relativity; great cathedrals and Beethoven's music: these modern mechanical war can destroy but never produce. At its most inventive height, war creates the Maxim gun, the submarine, disseminable germs of disease, life-blasting gases. Spiritually and intellectually, modern war is not creative.

Science would not be what it is if there had not been a Galileo, a Newton or a Lavoisier, any more than music would be what it is if Bach, Beethoven and Wagner had never lived. The world as we know it is the product of its geniusesand there may be evil as well as beneficent geniusand to deny that fact, is to stultify all history, whether it be that of the intellectual or the economic world.

There are many different styles of composition. I characterize them always as Mozart versus Beethoven. When Mozart began to write at that time he had the composition ready in his mind. He wrote the manuscript and it was aus einem Guss (casted as one). And it was also written very beautiful. Beethoven was an indecisive and a tinkerer and wrote down before he had the composition ready and plastered parts over to change them. There was a certain place where he plastered over nine times and one did remove that carefully to see what happened and it turned out the last version was the same as the first one.

[Adams] supposed that, except musicians, everyone thought Beethoven a bore, as every one except mathematicians thought mathematics a bore.

[On why are numbers beautiful?] Its like asking why is Beethovens Ninth Symphony beautiful. If you dont see why, someone cant tell you. I know numbers are beautiful. If they arent beautiful, nothing is.

[Trying to manipulate the salmon's natural migration is like] trying to replace Beethoven with Yanni.