Extremely hazardous is the desire to explain everything, and to supply whatever appears a gap in historyfor in this propensity lies the first cause and germ of all those violent and arbitrary hypotheses which perplex and pervert the science of history far more than the open avowal of our ignorance, or the uncertainty of our knowledge: hypotheses which give an oblique direction, or an exaggerated and false extension, to a view of the subject originally not incorrect.

In Friedrich von Schlegel and James Burton Robertson (trans.), The Philosophy of History (1835), 12.

Good work is no done by humble men. It is one of the first duties of a professor, for example, in any subject, to exaggerate a little both the importance of his subject and his own importance in it. A man who is always asking Is what I do worth while? and Am I the right person to do it? will always be ineffective himself and a discouragement to others. He must shut his eyes a little and think a little more of his subject and himself than they deserve. This is not too difficult: it is harder not to make his subject and himself ridiculous by shutting his eyes too tightly.

I believe that certain erroneous developments in particle theory ... are caused by a misconception by some physicists that it is possible to avoid philosophical arguments altogether. Starting with poor philosophy, they pose the wrong questions. It is only a slight exaggeration to say that good physics has at times been spoiled by poor philosophy.

I came to realize that exaggerated concern about what others are doing can be foolish. It can paralyze effort, and stifle a good idea. One finds that in the history of science almost every problem has been worked out by someone else. This should not discourage anyone from pursuing his own path.

In earlier times they had no statistics and so they had to fall back on lies. Hence the huge exaggerations of primitive literature, giants, miracles, wonders! It's the size that counts. They did it with lies and we do it with statistics: but it's all the same.

In his wretched life of less than twenty-seven years Abel accomplished so much of the highest order that one of the leading mathematicians of the Nineteenth Century (Hermite, 1822-1901) could say without exaggeration, Abel has left mathematicians enough to keep them busy for five hundred years. Asked how he had done all this in the six or seven years of his working life, Abel replied, By studying the masters, not the pupils.

In psycho-analysis nothing is true except the exaggerations. 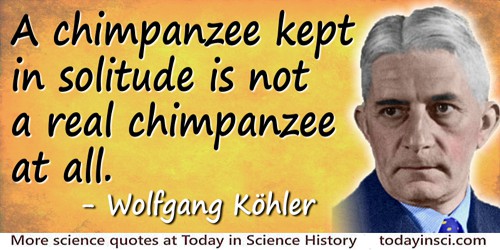 It is probably no exaggeration to suppose that in order to improve such an organ as the eye at all, it must be improved in ten different ways at once. And the improbability of any complex organ being produced and brought to perfection in any such way is an improbability of the same kind and degree as that of producing a poem or a mathematical demonstration by throwing letters at random on a table.
[Expressing his reservations about Darwin's proposed evolution of the eye by natural selection.]

Opening address to the Belfast Natural History Society, as given in the 'Belfast Northern Whig,' (19 Nov 1866). As cited by Charles Darwin in The Variation of Animals & Plants Under Domestication (1868), 222.

It may be asserted without exaggeration that the domain of mathematical knowledge is the only one of which our otherwise omniscient journalism has not yet possessed itself.

The full impact of the Lobatchewskian method of challenging axioms has probably yet to be felt. It is no exaggeration to call Lobatchewsky the Copernicus of Geometry [as did Clifford], for geometry is only a part of the vaster domain which he renovated; it might even be just to designate him as a Copernicus of all thought.

From a page of quotations, without citations, in G.E. Martin The Foundations of Geometry and the Non-Euclidean Plane (1975), 225. If you know the primary source, please contact Webmaster.

The progress of Science is generally regarded as a kind of clean, rational advance along a straight ascending line; in fact it has followed a zig-zag course, at times almost more bewildering than the evolution of political thought. The history of cosmic theories, in particular, may without exaggeration be called a history of collective obsessions and controlled schizophrenias; and the manner in which some of the most important individual discoveries were arrived at reminds one more of a sleepwalkers performance than an electronic brains.