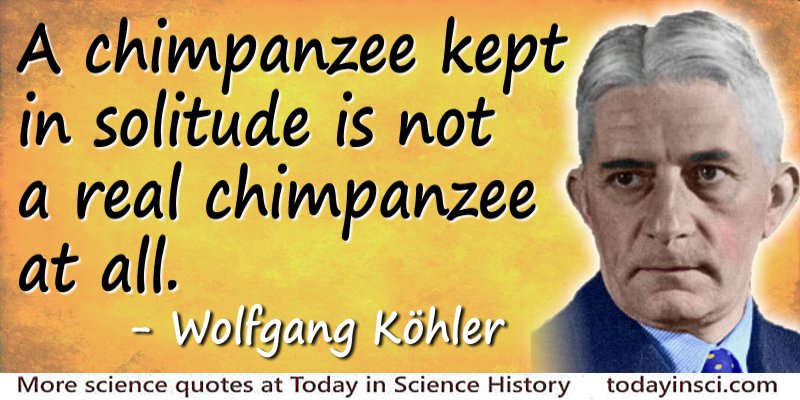 “It is hardly an exaggeration to say that a chimpanzee kept in solitude is not a real chimpanzee at all.”
— Wolfgang Köhler
In The Mentality of Apes (1925).

The book, The Mentality of Apes is a classic analysis of the intelligence of these animals by Wolfgang Köhler. His studies, which began a century ago, represented a turning point in the psychology of thinking. The short quote above, as sometimes referenced in books on animal psychology, means that “A chimpanzee is intellectually and emotionally bewildered if it is kept in solitary confinement.”1 In Köhler’s book, this sentence introduces a longer description of the behavior of an isolated chimpanzee:

“It is hardly an exaggeration to say that a chimpanzee kept in solitude is not a real chimpanzee at all. That certain special characteristic qualities of this species of animal only appear when they are in a group, is simply because the behaviour of his comrades constitutes for each separate animal the only incentive which will bring about a variety of different behaviour … the group connexion of chimpanzees is a very real force, of sometimes astonishing degree.

This can be clearly seen in any attempt to take one animal out of a group which is used to hanging together. When such a thing has never happened before, or not for a long time, the first and greatest desire of the separated creature is to get back to his group.

Very small animals are naturally extremely frightened, and show their fear to such a degree, that one simply has not the heart to keep them apart any longer.

Bigger animals, who do not show signs of actual fear, cry and scream and rage against the walls of their stockade, and, if they see anything like a way back, they will risk their very lives to get back to the group. Even after they are quite exhausted from these outbursts of despair, they will crouch, whimpering, in a corner, until they have recovered sufficient strength to renew their raging. As in tests with chimpanzees appetite is a necessary condition, for the first few days after the isolation of the animal it is impossible to conduct any experiments, because they refuse food altogether at first, and for a long while, even if hunger drives them to take a bite or two, they will immediately drop the food again apathetically.”