A good teacher is a master of simplification and an enemy of simplism.

According to the older view, for every single effect of a serum, there was a separate substance, or at least a particular chemical group... A normal serum contained as many different haemagglutinins as it agglutinated different cells. The situation was undoubtedly made much simpler if, to use the Ehrlich terminology... the separate haptophore groups can combine with an extremely large number of receptors in stepwise differing quantities as a stain does with different animal tissues, though not always with the same intensity. A normal serum would therefore visibly affect such a large number of different blood cells... not because it contained countless special substances, but because of the colloids of the serum, and therefore of the agglutinins by reason of their chemical constitution and the electrochemical properties resulting from it. That this manner of representation is a considerable simplification is clear; it also opens the way to direct experimental testing by the methods of structural chemistry.

I believe  that we can still have a genre of scientific books suitable for and accessible alike to professionals and interested laypeople. The concepts of science, in all their richness and ambiguity, can be presented without any compromise, without any simplification counting as distortion, in language accessible to all intelligent people  I hope that this book can be read with profit both in seminars for graduate students andif the movie stinks and you forgot your sleeping pillson the businessmans special to Tokyo.

Indeed, nothing more beautifully simplifying has ever happened in the history of science than the whole series of discoveries culminating about 1914 which finally brought practically universal acceptance to the theory that the material world contains but two fundamental entities, namely, positive and negative electrons, exactly alike in charge, but differing widely in mass, the positive electronnow usually called a protonbeing 1850 times heavier than the negative, now usually called simply the electron.

It is often the scientists experience that he senses the nearness of truth when  connections are envisioned. A connection is a step toward simplification, unification. Simplicity is indeed often the sign of truth and a criterion of beauty.

It would seem that more than function itself, simplicity is the deciding factor in the aesthetic equation. One might call the process beauty through function and simplification.

Knowledge is a process of piling up facts; wisdom lies in their simplification.

Mathematics is often considered a difficult and mysterious science, because of the numerous symbols which it employs. Of course, nothing is more incomprehensible than a symbolism which we do not understand.  But this is not because they are difficult in themselves. On the contrary they have invariably been introduced to make things easy.  [T]he symbolism is invariably an immense simplification. It  represents an analysis of the ideas of the subject and an almost pictorial representation of their relations to each other.

Nature is disordered, powerful and chaotic, and through fear of the chaos we impose system on it. We abhor complexity, and seek to simplify things whenever we can by whatever means we have at hand. We need to have an overall explanation of what the universe is and how it functions. In order to achieve this overall view we develop explanatory theories which will give structure to natural phenomena: we classify nature into a coherent system which appears to do what we say it does.

Science means simplification. It substitutes a single rule for a million miscellaneous observations. 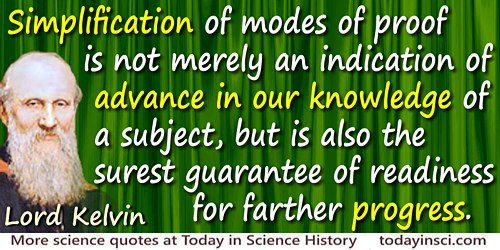 Simplification of modes of proof is not merely an indication of advance in our knowledge of a subject, but is also the surest guarantee of readiness for farther progress.

The central dogma, enunciated by Crick in 1958 and the keystone of molecular biology ever since, is likely to prove a considerable over-simplification. That is the heretical but inescapable conclusion stemming from experiments done in the past few months in two laboratories in the United States.

The method of science depends on our attempts to describe the world with simple theories: theories that are complex may become untestable, even if they happen to be true. Science may be described as the art of systematic over-simplificationthe art of discerning what we may with advantage omit.

The present state of electrical science seems peculiarly unfavorable to speculation  to appreciate the requirements of the science, the student must make himself familiar with a considerable body of most intricate mathematics, the mere retention of which in the memory materially interferes with further progress. The first process therefore in the effectual study of the science, must be one of simplification and reduction of the results of previous investigation to a form in which the mind can grasp them.

The simplification of anything is always sensational.

There is one simplification at least. Electrons behave ... in exactly the same way as photons; they are both screwy, but in exactly in the same way...

'Probability abd Uncertaintythe Quantum Mechanical View of Nature', the sixth of his Messenger Lectures (1964), Cornell University. Collected in The Character of Physical Law (1967), 128.

To remember simplified pictures is better than to forget accurate figures.

When the first mathematical, logical, and natural uniformities, the first laws, were discovered, men were so carried away by the clearness, beauty and simplification that resulted, that they believed themselves to have deciphered authentically the eternal thoughts of the Almighty.

From Lecture (Nov 1906) at the Lowell Institute, Boston. Published in 'The Present Dilemma in Philosophy',Pragmatism: A New Name for Some Old Ways of Thinking: Popular Lectures on Philosophy (1907), 56.