Communication of science as subject-matter has so far outrun in education the construction of a scientific habit of mind that to some extent the natural common sense of mankind has been interfered with to its detriment.

For any one who is pervaded with the sense of causal law in all that happens, who accepts in real earnest the assumption of causality, the idea of a Being who interferes with the sequence of events in the world is absolutely impossible! Neither the religion of fear nor the social-moral religion can have, any hold on him. A God who rewards and punishes is for him unthinkable, because man acts in accordance with an inner and outer necessity, and would, in the eyes of God, be as little responsible as an inanimate object is for the movements which it makes. Science, in consequence, has been accused of undermining moralsâ€”but wrongly. The ethical behavior of man is better based on sympathy, education and social relationships, and requires no support from religion. Manâ€™s plight would, indeed, be sad if he had to be kept in order through fear of punishment and hope of rewards after death.

From 'Religion and Science', The New York Times Magazine, (9 Nov 1930), 1. Article in full, reprinted in Edward H. Cotton (ed.), Has Science Discovered God? A Symposium of Modern Scientific Opinion (1931), 101. The wording differs significantly from the version collected in 'Religion And Science', Ideas And Opinions (1954), 39, giving its source as: â€śWritten expressly for the New York Times Magazine. Appeared there November 9, 1930 (pp. 1-4). The German text was published in the Berliner Tageblatt, November 11, 1930.â€ť This variant form of the quote from the book begins, â€śThe man who is thoroughly convinced of the universal operation of the law of causationâ€¦.â€ť and is also on the Albert Einstein Quotes page on this website. As for why the difference, Webmaster speculates the book form editor perhaps used a revised translation from Einsteinâ€™s German article.

I have never let my schooling interfere with my education.

In general the actions which we see ever taking place around us are complex, or due to the simultaneous action of many causes. When, as in astronomy, we endeavour to ascertain these causes by simply watching their effects, we observe; when, as in our laboratories, we interfere arbitrarily with the causes or circumstances of a phenomenon, we are said to experiment.

My practice as a scientist is atheistic. That is to say, when I set up an experiment I assume that no god, angel or devil is going to interfere with its course; and this assumption has been justified by such success as I have achieved in my professional career. I should therefore be intellectually dishonest if I were not also atheistic in the affairs of the world.

Of all the works of civilization that interfere with the natural water distribution system, irrigation has been by far the most pervasive and powerful. (1992)

The man who is thoroughly convinced of the universal operation of the law of causation cannot for a moment entertain the idea of a being who interferes in the course of eventsâ€“provided, of course, that he takes the hypothesis of causality really seriously. He has no use for the religion of fear and equally little for social or moral religion. A God who rewards and punishes is inconceivable to him for the simple reason that a manâ€™s actions are determined by necessity, external and internal, so that in Godâ€™s eyes he cannot be responsible, any more than an inanimate object is responsible for the motions it undergoes. Science has therefore been charged with undermining morality, but the charge is unjust. A manâ€™s ethical behavior should be based effectually on sympathy, education, and social ties and needs; no religious basis is necessary. Man would indeed be in a poor way if he had to be restrained by fear of punishment and hopes of reward after death.

From 'Religion And Science', as collected in Ideas And Opinions (1954), 39, given its source as: â€śWritten expressly for the New York Times Magazine. Appeared there November 9, 1930 (pp. 1-4). The German text was published in the Berliner Tageblatt, November 11, 1930.â€ť The NYT Magazine article in full, is reprinted in Edward H. Cotton (ed.), Has Science Discovered God? A Symposium of Modern Scientific Opinion (1931), 101. This original version directly from the magazine has significantly different wording, beginning, â€śFor anyone who is pervaded with the sense of causal lawâ€¦.â€ť See this alternate form on the Albert Einstein Quotes page on this website. As for why the difference, Webmaster speculates the book form editor perhaps used a revised translation from Einsteinâ€™s German article.

The more a man is imbued with the ordered regularity of all events the firmer becomes his conviction that there is no room left by the side of this ordered regularity for causes of a different nature. For him neither the rule of human nor the rule of divine will exists as an independent cause of natural events. To be sure, the doctrine of a personal God interfering with natural events could never be refuted, in the real sense, by science, for this doctrine can always take refuge in those domains in which scientific knowledge has not yet been able to set foot.

The politician â€¦ is sometimes tempted to encroach on the normal territory of the scientific estate. Sometimes he interferes directly with the scientistâ€™s pursuit of basic science; but he is more likely to interfere when the scientist proposes to publish findings that upset the established political or economic order, or when he joins with the engineering or medical profession in proposing to translate the findings of science into new policies. â€¦ Who decides when the apparent consensus of scientific opinion on the relation of cigarettes to lung cancer is great enough to justify governmental regulatory action, and of what kind? In such issues the problem is less often whether politics will presume to dictate to science than it is how much politics is to be influenced by the new findings of science.

The present state of electrical science seems peculiarly unfavorable to speculation â€¦ to appreciate the requirements of the science, the student must make himself familiar with a considerable body of most intricate mathematics, the mere retention of which in the memory materially interferes with further progress. The first process therefore in the effectual study of the science, must be one of simplification and reduction of the results of previous investigation to a form in which the mind can grasp them.

When accepting the James T. Grady award from the American Chemical Society. As quoted in Something About the Author (1981), Vol. 26, 32. 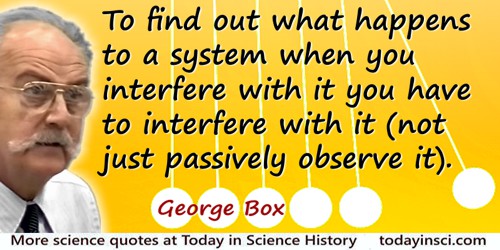 Unless there exist peculiar institutions for the support of such inquirers, or unless the Government directly interfere, the contriver of a thaumatrope may derive profit from his ingenuity, whilst he who unravels the laws of light and vision, on which multitudes of phenomena depend, shall descend unrewarded to the tomb.

[Rochelle Esposito] said that she didnâ€™t normally interfere, but wanted to tell me that it was really risky to switch organisms before getting tenure.

Recollection in her own words, as quoted in Anna Azvolinsky, 'Fearless About Folding', The Scientist (Jan 2016).

â€śArcturusâ€ť is his other name-
Iâ€™d rather call him â€śStar.â€ť
Itâ€™s very mean of Science
To go and interfere!