A statistician is someone who is good with numbers but lacks the personality to be an accountant.
[Or economist]

Found, for example, in A Prairie Home Companion Pretty Good Joke Book (4th ed., 2005), 216. Also seen as defining an Economist in Eighteen Annual Institute on Securities Regulation (1987), 131, which quotes it as Tim Wirth used to say. 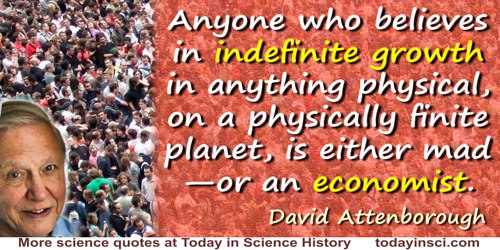 Anyone who believes in indefinite growth in anything physical, on a physically finite planet, is either mador an economist.

Expressing concern about ecosystems ruined by the arrival of man. As quoted by Philip Maughan, 'Sixty Years of Attenborough Through the Eyes of the New Statesman', New Statesman (21 Dec 2012), 141, No. 5138, 34. The quote came from Attenborough writing in an April 2013 issue of the same periodical.

Economists use the expression opportunity costs for losses incurred through certain choices made over others, including ignorance and inaction. For systematics, or more precisely the neglect of systematics and the biological research dependent upon it, the costs are very high.

I suppose that the first chemists seemed to be very hard-hearted and unpoetical persons when they scouted the glorious dream of the alchemists that there must be some process for turning base metals into gold. I suppose that the men who first said, in plain, cold assertion, there is no fountain of eternal youth, seemed to be the most cruel and cold-hearted adversaries of human happiness. I know that the economists who say that if we could transmute lead into gold, it would certainly do us no good and might do great harm, are still regarded as unworthy of belief. Do not the money articles of the newspapers yet ring with the doctrine that we are getting rich when we give cotton and wheat for gold rather than when we give cotton and wheat for iron?

If all economists were laid end to end, they would not reach a conclusion.

Often seen misattributed (?) to George Bernard Shaw, but there appears to be no source in the writings of Shaw. However, the theme "laid end to end, they would not" has long been used humorously in various incarnations. For example, If all the arguments in the world were placed end to end, they would not reach any conclusion, as used by Tom Sims in 'Tom Sims Says', Brownwood Bulletin (18 Jul 1925), 4. The subject quote was attributed to Shaw by George Soule in 'Bridges to the Unknown', in The Saturday Review of Literature (20 May 1933), 9, No. 44, 601. See discussion on the quoteinvestigator.com website.

In the company of friends, writers can discuss their books, economists the state of the economy, lawyers their latest cases, and businessmen their latest acquisitions, but mathematicians cannot discuss their mathematics at all. And the more profound their work, the less understandable it is.

Nature, who is a great economist, converts the recreation of one animal to the support of another.

Orthodoxy can be as stubborn in science as in religion. I do not know how to shake it except by vigorous imagination that inspires unconventional work and contains within itself an elevated potential for inspired error. As the great Italian economist Vilfredo Pareto wrote: Give me a fruitful error any time, full of seeds, bursting with its own corrections. You can keep your sterile truth for yourself. Not to mention a man named Thomas Henry Huxley who, when not in the throes of grief or the wars of parson hunting, argued that irrationally held truths may be more harmful than reasoned errors.

The age of chivalry is gone. That of sophisters, economists and calculators has succeeded.

The effort of the economist is to see, to picture the interplay of economic elements. The more clearly cut these elements appear in his vision, the better; the more elements he can grasp and hold in his mind at once, the better. The economic world is a misty region. The first explorers used unaided vision. Mathematics is the lantern by which what before was dimly visible now looms up in firm, bold outlines. The old phantasmagoria disappear. We see better. We also see further.

In Mathematical Investigations in the Theory of Value and Prices (1892), 119.

The suppression of crime is not entirely a legal question. It is a problem for the physician, the economist and the lawyer. We, as physicians, should encourage the criminologist by lending to him the surgeon, the internist and all of the rest of the resources of medicine, just as we have done in the case of the flea man, the fly man, the mosquito man, the bed-bug man and all the other ologists.

From paper read at the Section on State Medicine and Public Hygiene of the State Medical Association of Texas at El Paso (11 May 1922), 'The Use Of Scopolamine In Criminology', published in Texas State Journal of Medicine (Sep 1922). Reprinted in The American Journal of Police Science (Jul-Aug 1931), 2, No. 4, 328.

The tendency of the sciences has long been an increasing proclivity of separation and dismemberment  The mathematician turns away from the chemist; the chemist from the naturalist; the mathematician, left to himself divides himself into a pure mathematician and a mixed mathematician, who soon part company  And thus science, even mere physical science, loses all traces of unity. A curious illustration of this result may be observed in the want of any name by which we can designate the students of the knowledge of the material world collectively. We are informed that this difficulty was felt very oppressively by the members of the British Association for the Advancement of Science, at their meetings at York, Oxford and Cambridge, in the last three summers. There was no general term by which these gentlemen could describe themselves with reference to their pursuits  some ingenious gentleman [William Whewell] proposed that, by analogy with artist, they might form Scientist, and added that there could be no scruple  when we have words such as sciolist, economist, and atheistbut this was not generally palatable. 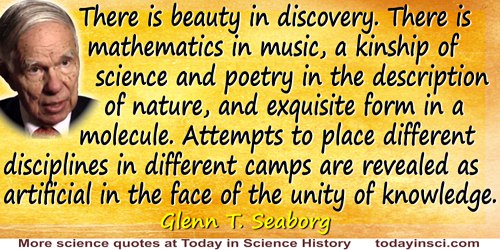