Question: Account for the delicate shades of colour sometimes seen on the inside of an oyster shell. State and explain the appearance presented when a beam of light falls upon a sheet of glass on which very fine equi-distant parallel lines have been scratched very close to one another.
Answer: The delicate shades are due to putrefaction; the colours always show best when the oyster has been a bad one. Hence they are considered a defect and are called chromatic aberration.
The scratches on the glass will arrange themselves in rings round the light, as any one may see at night in a tram car.

Genuine student answer* to an Acoustics, Light and Heat paper (1880), Science and Art Department, South Kensington, London, collected by Prof. Oliver Lodge. Quoted in Henry B. Wheatley, Literary Blunders (1893), 182, Question 27. (*From a collection in which Answers are not given verbatim et literatim, and some instances may combine several students' blunders.)

A formative influence on my undergraduate self was the response of a respected elder statesmen of the Oxford Zoology Department when an American visitor had just publicly disproved his favourite theory. The old man strode to the front of the lecture hall, shook the American warmly by the hand and declared in ringing, emotional tones: ŌĆśMy dear fellow, I wish to thank you. I have been wrong these fifteen years.ŌĆÖ And we clapped our hands red. Can you imagine a Government Minister being cheered in the House of Commons for a similar admission? ŌĆ£Resign, ResignŌĆØ is a much more likely response!

For a smart material to be able to send out a more complex signal it needs to be nonlinear. If you hit a tuning fork twice as hard it will ring twice as loud but still at the same frequency. ThatŌĆÖs a linear response. If you hit a person twice as hard theyŌĆÖre unlikely just to shout twice as loud. That property lets you learn more about the person than the tuning fork. - When Things Start to Think, 1999.

I have been battering away at Saturn, returning to the charge every now and then. I have effected several breaches in the solid ring, and now I am splash into the fluid one, amid a clash of symbols truly astounding. When I reappear it will be in the dusky ring, which is something like the state of the air supposing the siege of Sebastopol conducted from a forest of guns 100 miles one way, and 30,000 miles the other, and the shot never to stop, but go spinning away round a circle, radius 170,000 miles.

I saw Eternity the other night,
Like a great Ring of pure and endless light,
All calm, as it was bright;
And round beneath it,
Time, in hours, days, years,
DrivŌĆÖn by the spheres
Like a vast shadow movŌĆÖd; in which the world
And all her train were hurlŌĆÖd.

I suppose that the first chemists seemed to be very hard-hearted and unpoetical persons when they scouted the glorious dream of the alchemists that there must be some process for turning base metals into gold. I suppose that the men who first said, in plain, cold assertion, there is no fountain of eternal youth, seemed to be the most cruel and cold-hearted adversaries of human happiness. I know that the economists who say that if we could transmute lead into gold, it would certainly do us no good and might do great harm, are still regarded as unworthy of belief. Do not the money articles of the newspapers yet ring with the doctrine that we are getting rich when we give cotton and wheat for gold rather than when we give cotton and wheat for iron?

I was sitting writing at my textbook but the work did not progress; my thoughts were elsewhere. I turned my chair to the fire and dozed. Again the atoms were gambolling before my eyes. This time the smaller groups kept modestly in the background. My mental eye, rendered more acute by the repeated visions of the kind, could now distinguish larger structures of manifold confirmation: long rows, sometimes more closely fitted together all twining and twisting in snake like motion. But look! What was that? One of the snakes had seized hold of its own tail, and the form whirled mockingly before my eyes. As if by a flash of lightning I awoke; and this time also I spent the rest of the night in working out the rest of the hypothesis. Let us learn to dream, gentlemen, then perhaps we shall find the truth... But let us beware of publishing our dreams till they have been tested by waking understanding.

I was working with these very long-chain ŌĆ” extended-chain polymers, where you had a lot of benzene rings in them. ŌĆ” Transforming a polymer solution from a liquid to a fiber requires a process called spinning. ŌĆ” We spun it and it spun beautifully. It [Kevlar] was very strong and very stiffŌĆöunlike anything we had made before. I knew that I had made a discovery. I didnŌĆÖt shout ŌĆ£Eureka!ŌĆØ but I was very excited, as was the whole laboratory excited, and management was excited, because we were looking for something new. Something different. And this was it.

In the case of a Christian clergyman, the tragic-comical is found in this: that the Christian religion demands love from the faithful, even love for the enemy. This demand, because it is indeed superhuman, he is unable to fulfill. Thus intolerance and hatred ring through the oily words of the clergyman. The love, which on the Christian side is the basis for the conciliatory attempt towards Judaism is the same as the love of a child for a cake. That means that it contains the hope that the object of the love will be eaten up.

The bushels of rings taken from the fingers of the slain at the battle of Cann├”, above two thousand years ago, are recorded; ŌĆ” but the bushels of corn produced in England at this day, or the number of the inhabitants of the country, are unknown, at the very time that we are debating that most important question, whether or not there is sufficient substance for those who live in the kingdom.

In The Statistical Breviary: Shewing, on a Principle Entirely New, the Resources of Every State and Kingdom in Europe (1801), 7-8. 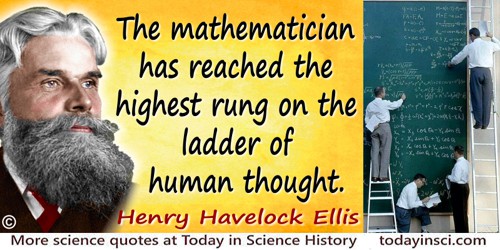 The mathematician has reached the highest rung on the ladder of human thought.

The truth is, PavlovŌĆÖs dog trained Pavlov to ring this bell just before the dog salivated.

When I was living with the Indians, my hostess, a fine looking woman, who wore numberless bracelets, and rings in her ears and on her fingers, and painted her face like a brilliant sunset, one day gave away a very fine horse. I was surprised, for I knew there had been no family talk on the subject, so I asked: ŌĆ£Will your husband like to have you give the horse away?ŌĆØ Her eyes danced, and, breaking into a peal of laughter, she hastened to tell the story to the other women gathered in the tent, and I became the target of many merry eyes. I tried to explain how a white woman would act, but laughter and contempt met my explanation of the white manŌĆÖs hold upon his wifeŌĆÖs property.

ŌĆ”so slow is moral progress. True, we have the bicycle, the motor-car, the dirigible airship and other marvellous means of breaking our bones; but our morality is not one rung the higher for it all. One would even say that, the farther we proceed in our conquest of matter, the more our morality recedes. The most advanced of our inventions consists in bringing men down with grapeshot and explosives with the swiftness of the reaper mowing the corn.