230(231-1) ... is the greatest perfect number known at present, and probably the greatest that ever will be discovered; for; as they are merely curious without being useful, it is not likely that any person will attempt to find a number beyond it.

'Die Natur der chemischen Elemente als Function ihrer Atomgewichte' ('The Nature of the Chemical Elements as a Function of their Atomic Weight'), Annalen der Chemie (1870), supp. b, 354. Original German paper reprinted in Lothar Meyer and Dmitry Ivanovich Mendeleyev, Das natürliche System der chemischen Elemente: Abhandlungen (1895), 9. Translation by Webmaster, with punctuation faithful to the original, except a comma was changed to a dash to improve readability.

A neat and orderly laboratory is unlikely. It is, after all, so much a place of false starts and multiple attempts. 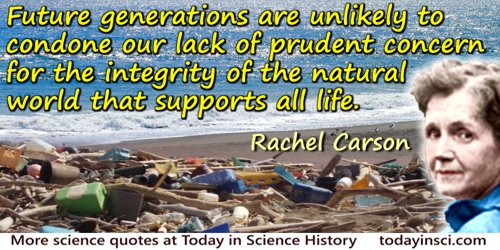 I ought to call myself an agnostic; but, for all practical purposes, I am an atheist. I do not think the existence of the Christian God any more probable than the existence of the Gods of Olympus or Valhalla. To take another illustration: nobody can prove that there is not between the Earth and Mars a china teapot revolving in an elliptical orbit, but nobody thinks this sufficiently likely to be taken into account in practice. I think the Christian God just as unlikely.

In assessing Audubon, whose firm grip on the popular imagination has scarcely lessened since 1826, we must as historians of science seriously ask who would remember him if he had not been an artist of great imagination and flair. ... The chances seem to be very poor that had he not been an artist, he would be an unlikely candidate for a dictionary of scientific biography, if remembered to science at all.

Most writing online is devolving toward SMS and tweets that involve quick, throwaway notes with abbreviations and threaded references. This is not a form of lasting communication. In 2020 there is unlikely to be a list of classic tweets and blog posts that every student and educated citizen should have read.

Now, it may be stretching an analogy to compare epidemics of choleracaused by a known agentwith that epidemic of violent crime which is destroying our cities. It is unlikely that our social problems can be traced to a single, clearly defined cause in the sense that a bacterial disease is caused by a microbe. But, I daresay, social science is about as advanced in the late twentieth century as bacteriological science was in the mid nineteenth century. Our forerunners knew something about cholera; they sensed that its spread was associated with misdirected sewage, filth, and the influx of alien poor into crowded, urban tenements. And we know something about street crime; nowhere has it been reported that a member of the New York Stock Exchange has robbed ... at the point of a gun. Indeed, I am naively confident that an enlightened social scientist of the next century will be able to point out that we had available to us at least some of the clues to the cause of urban crime.

'Cholera at the Harvey,' Woods Hole Cantata: Essays on Science and Society (1985).

The information reported in this section [about the two different forms, A and B, of DNA] was very kindly reported to us prior to its publication by Drs Wilkins and Franklin. We are most heavily indebted in this respect to the Kings College Group, and we wish to point out that without this data the formation of the picture would have been most unlikely, if not impossible.
[Co-author with Francis Crick]

In 'The Complementary Structure of Deoxyribonucleic Acid', Proceedings of the Royal Society of London, Series A (1954), 223, 82, footnote.

The real achievement in discoveries  is seeing an analogy where no one saw one before.  The essence of discovery is that unlikely marriage of  previously unrelated forms of reference or universes of discourse, whose union will solve the previously insoluble problem.

Those [scientists] who dislike entertaining contradictory thoughts are unlikely to enrich their science with new ideas.

Attributed. (If you know a primary source, please contact webmaster.)