And from this such small difference of eight minutes [of arc] it is clear why Ptolemy, since he was working with bisection [of the linear eccentricity], accepted a fixed equant point . For Ptolemy set out that he actually did not get below ten minutes [of arc], that is a sixth of a degree, in making observations. To us, on whom Divine benevolence has bestowed the most diligent of observers, Tycho Brahe, from whose observations this eight-minute error of Ptolemys in regard to Mars is deduced, it is fitting that we accept with grateful minds this gift from God, and both acknowledge and build upon it. So let us work upon it so as to at last track down the real form of celestial motions (these arguments giving support to our belief that the assumptions are incorrect). This is the path I shall, in my own way, strike out in what follows. For if I thought the eight minutes in [ecliptic] longitude were unimportant, I could make a sufficient correction (by bisecting the [linear] eccentricity) to the hypothesis found in Chapter 16. Now, because they could not be disregarded, these eight minutes alone will lead us along a path to the reform of the whole of Astronomy, and they are the matter for a great part of this work. 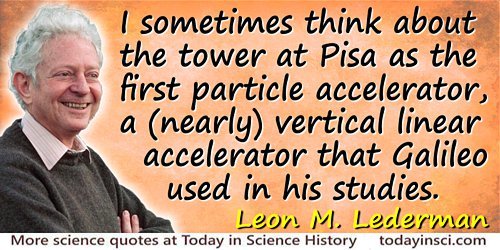 I sometimes think about the tower at Pisa as the first particle accelerator, a (nearly) vertical linear accelerator that Galileo used in his studies.

If it is possible to have a linear unit that depends on no other quantity, it would seem natural to prefer it. Moreover, a mensural unit taken from the earth itself offers another advantage, that of being perfectly analogous to all the real measurements that in ordinary usage are also made upon the earth, such as the distance between two places or the area of some tract, for example. It is far more natural in practice to refer geographical distances to a quadrant of a great circle than to the length of a pendulum.

Knowing what we know from X-ray and related studies of the fibrous proteins, how they are built from long polypeptide chains with linear patterns drawn to a grand scale, how these chains can contract and take up different configurations by intramolecular folding, how the chain- groups are penetrated by, and their sidechains react with, smaller co-operating molecules, and finally how they can combine so readily with nucleic acid molecules and still maintain the fibrous configuration, it is but natural to assume, as a first working hypothesis at least, that they form the long scroll on which is written the pattern of life. No other molecules satisfy so many requirements.

Quantity is that which is operated with according to fixed mutually consistent laws. Both operator and operand must derive their meaning from the laws of operation. In the case of ordinary algebra these are the three laws already indicated [the commutative, associative, and distributive laws], in the algebra of quaternions the same save the law of commutation for multiplication and division, and so on. It may be questioned whether this definition is sufficient, and it may be objected that it is vague; but the reader will do well to reflect that any definition must include the linear algebras of Peirce, the algebra of logic, and others that may be easily imagined, although they have not yet been developed. This general definition of quantity enables us to see how operators may be treated as quantities, and thus to understand the rationale of the so called symbolical methods.

The idea that memory is linear is nonsense. What we have in our heads is a collection of frames. As to time itselfcan it be linear when all these snatches of other presents exist at once in your mind? A very elusive and tricky concept, time."

The problem with linear theory is that it is not nonlinear.

Epigraph in Mathematics in Nature: Modeling Patterns in the Natural World (2003), 173. Quoting from his own first professional presentation as a first-year graduate student.

Today it is no longer questioned that the principles of the analysts are the more far-reaching. Indeed, the synthesists lack two things in order to engage in a general theory of algebraic configurations: these are on the one hand a definition of imaginary elements, on the other an interpretation of general algebraic concepts. Both of these have subsequently been developed in synthetic form, but to do this the essential principle of synthetic geometry had to be set aside. This principle which manifests itself so brilliantly in the theory of linear forms and the forms of the second degree, is the possibility of immediate proof by means of visualized constructions.

We [Irving Kaplansky and Paul Halmos] share a philosophy about linear algebra: we think basis-free, we write basis-free , but when the chips are down we close the office door and compute with matrices like fury.