Q: What did the fish say when he hit a concrete wall? A: Dam!

Anything will lase if you hit it hard enough.

As quoted in Steven Chu and Charles H. Townes, 'Arthur Schawlow', Biographical Memoirs of the National Academy of Sciences (2003), Vol. 83, 203.

Common sense iz instinkt, and instinkt dont make enny blunders mutch, no more than a rat duz, in coming out, or going intew a hole, he hits the hole the fust time, and just fills it.

Genius iz always in advance ov the times, and makes sum magnificent hits, but the world owes most ov its tributes to good hoss sense.

I do not think we can impose limits on research. Through hundreds of thousands of years, mans intellectual curiosity has been essential to all the gains we have made. Although in recent times we have progressed from chance and hit-or-miss methods to consciously directed research, we still cannot know in advance what the results may be. It would be regressive and dangerous to trammel the free search for new forms of truth.

No gun is perfectly true. So the marksman, that he may hit the bull's-eye, points elsewhere.

Reason is always a kind of brute force; those who appeal to the head rather than the heart, however pallid and polite, are necessarily men of violence. We speak of touching a mans heart, but we can do nothing to his head but hit it.

Richard Feynman was fond of giving the following advice on how to be a genius. You have to keep a dozen of your favorite problems constantly present in your mind, although by and large they will lay in a dormant state. Every time you hear or read a new trick or a new result, test it against each of your twelve problems to see whether it helps. Every once in a while there will be a hit, and people will say, How did he do it? He must be a genius!

The general root of superstition [is that] men observe when things hit, and not when they miss, and commit to memory the one, and pass over the other.

The Titanic didnt sink because it hit an iceberg; it sank because the steel was brittle and it cracked. If you know the structure of a material, you can figure out how to improve it.

Speaking as group leader of the Electron Microscopy Group at Oak Ridge National Laboratory which uses scanning transmission electron microscopy (STEM) to image atomic structure. As quoted by Alex Stone in 'The Secret Life of Atoms', in magazine, Discover (Jun 2007), 28, 5253.

Theres no value in digging shallow wells in a hundred places. Decide on one place and dig deep ... If you leave that to dig another well, all the first effort is wasted and there is no proof you wont hit rock again.

Thinking is merely the comparing of ideas, discerning relations of likeness and of difference between ideas, and drawing inferences. It is seizing general truths on the basis of clearly apprehended particulars. It is but generalizing and particularizing. Who will deny that a child can deal profitably with sequences of ideas like: How many marbles are 2 marbles and 3 marbles? 2 pencils and 3 pencils? 2 balls and 3 balls? 2 children and 3 children? 2 inches and 3 inches? 2 feet and 3 feet? 2 and 3? Who has not seen the countenance of some little learner light up at the end of such a series of questions with the exclamation, Why its always that way. Isnt it? This is the glow of pleasure that the generalizing step always affords him who takes the step himself. This is the genuine life-giving joy which comes from feeling that one can successfully take this step. The reality of such a discovery is as great, and the lasting effect upon the mind of him that makes it is as sure as was that by which the great Newton hit upon the generalization of the law of gravitation. It is through these thrills of discovery that love to learn and intellectual pleasure are begotten and fostered. Good arithmetic teaching abounds in such opportunities.

In Arithmetic in Public Education (1909), 13. As quoted and cited in Robert Édouard Moritz, Memorabilia Mathematica; Or, The Philomaths Quotation-book (1914), 68. 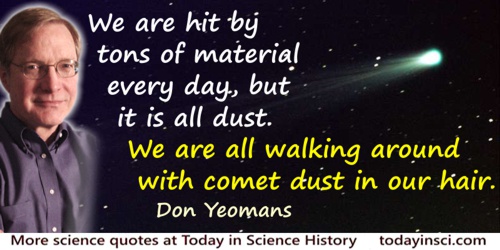 We are hit by tons of material every day, but it is all dust. We are all walking around with comet dust in our hair.

Were very safety conscious, arent we? [In 1989,] I did a programme on fossils, Lost Worlds, Vanished Lives, and got a letter from a geologist saying, You should have been wearing protective goggles when you were hitting that rock. Fragments could have flown into your eye and blinded you. What a bad example you are. I thought, Oh, for goodness sake...