At last have made wonderful discovery in valley; a magnificent tomb with seals intact; re-covered same for your arrival; congratulations.

Enthusiasm for the global-warming scare also ensures that heatwaves make headlines, while contrary symptoms, such as this winters billion-dollar loss of Californian crops to unusual frost, are relegated to the business pages. The early arrival of migrant birds in spring provides colourful evidence for a recent warming of the northern lands. But did anyone tell you that in east Antarctica the Adélie penguins and Cape petrels are turning up at their spring nesting sites around nine days later than they did 50 years ago? While sea-ice has diminished in the Arctic since 1978, it has grown by 8% in the Southern Ocean.

Here I am: My brain is open.
[As an itinerant scholar, this was greeting he often gave, ready to collaborate, upon arrival at the home of any mathematician colleague.]

Quoted by Béla Bollobás, 'The Life and Work of Paul Erdos", in Shiing-Shen Chern and Friedrich Hirzebruch, Wolf Prize in Mathematics (2000), 293.

I decided to study science and, on arrival at Cambridge, became extremely excited and interested in biochemistry when I first heard about it. It seemed to me that here was a way to really understand living matter and to develop a more scientific basis to many medical problems.

I was then in Germany, where I had been drafted because of the wars that are still going on there, and as I was returning to the army from the emperor's coronation, the arrival of winter delayed me in quarters where, finding no company to distract me and, luckily, having no cares or passions to trouble me, I used to spend the whole day alone in a room, that was heated by a stove, where I had plenty of time to concentrate on my own thoughts. 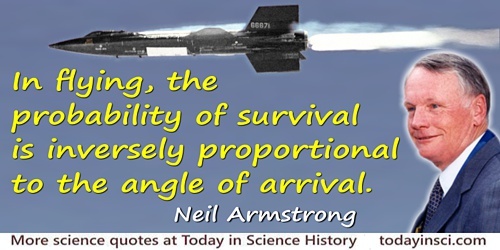 In flying, the probability of survival is inversely proportional to the angle of arrival.

Science enhances the moral value of life, because it furthers a love of truth and reverencelove of truth displaying itself in the constant endeavor to arrive at a more exact knowledge of the world of mind and matter around us, and reverence, because every advance in knowledge brings us face to face with the mystery of our own being.

The central task of science is to arrive, stage by stage, at a clearer comprehension of nature, but this does not mean, as it is sometimes claimed to mean, a search for mastery over nature.

In Late Night Thoughts on Listening to Mahler's Ninth Symphony(1984), 153.

The late James McNeil Whistler had a French poodle of which he was extravagantly fond. This poodle was seized with an affection of the throat, and Whistler had the audacity to send for the great throat specialist, Mackenzie. Sir Morell, when he saw that he had been called to treat a dog, didn't like it much, it was plain. But he said nothing. He prescribed, pocketed a big fee, and drove away.
The next day he sent posthaste for Whistler. And Whistler, thinking he was summoned on some matter connected with his beloved dog, dropped his work and rushed like the wind to Mackenzie's. On his arrival Sir Morell said, gravely: How do you do, Mr. Whistler? I wanted to see you about having my front door painted.

Attributed or merely a legend. This anecdote wording is from 'Turn About Is Fair Play', Collier's (26 Mar 1904), 32, No. 26, 24, the earliest version the Webmaster has found so far. It has been variously reworded and printed in a number of books and magazines over the decades since, and is still circulated in the present day. The wording of Mackenzie's remark changes from one version to another, but remains true to the sense of it. In Medical Record (4 Jan 1913), 83, No. 1, 46, a reprinted column from The Universal Medical Record says: X relates that he has recently been watching through the weekly papers, of a story anent the artist Whistler and Sir mrell Mackenzie, which, curiously enough, starting in Paris, has now reached the American medical Journals and seems embarked on a long and active career. ... Mr. Ben Trovato, the eminent raconteur, seems for the moment at fault. Still, the natural history of such legends as this leads us to suppose that the story of the laryngologist and the poodle will continue to circulate, till after having served its day it falls on sleep, later to be revived by the journalists of the next generation about some heroes of to-day. Examples of other versions are in La Vulgarisation scientifique: revue mensuelle illustrée (1906); Don C. Seitz Whistler Stories (1913); Lewis C. Henry, Humorous Anecdotes About Famous People (1948); Graeme Garden The Best Medicine (1984); The Reader's Digest (1986), 128, Nos. 765-769, 40. So, in fact, this anecdote has, indeed, been revived for over a century, but is still narrated about Whistler and Mackenzie. Meanwhile, the column in the Medical Record mentioned above comments: Why Whistlerwhose brother, by-the-bye, was almost equally celebrated in the same department of medicineshould have desired the services of a laryngologist for his poodle, heaven only knows. So, whether to regard this as entirely legend, or perhaps having some foundation of truth, the Webmaster cannot say, but would like to hear from anyone with more historical background to add.

The mystic and the physicist arrive at the same conclusion; one starting from the inner realm, the other from the outer world. The harmony between their views confirms the ancient Indian wisdom that Brahman, the ultimate reality without, is identical to Atman, the reality within.

We seem to be heading for a state of affairs in which the determination of whether or not Doomsday has arrived will be made either by an automatic device ... or by a pre-programmed president who, whether he knows it or not, will be carrying out orders written years before by some operations analyst.

We were flying over America and suddenly I saw snow, the first snow we ever saw from orbit. I have never visited America, but I imagined that the arrival of autumn and winter is the same there as in other places, and the process of getting ready for them is the same. And then it struck me that we are all children of our Earth.