A certain author defines a doctor to be a man who writes prescriptions till the patient either dies or is cured by nature.

A doctor is a man who writes prescriptions till the patient either dies or is cured by nature. 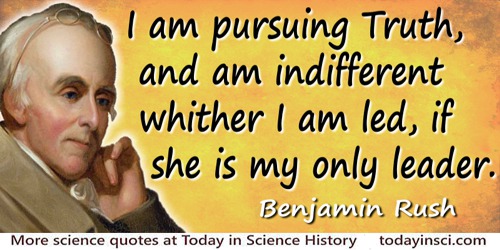 Dissections daily convince us of our ignorance of disease, and cause us to blush at our prescriptions. What mischief have we done under the belief of false facts and false theories! We have assisted in multiplying diseases; we have done more; we have increased their mortality. ... I am pursuing Truth, and am indifferent whither I am led, if she is my only leader.

From a public lecture by Rush. Quoted by Isaac Jennings, in Medical Reform; a Treatise on Man's Physical Being and Disorders (1847), 33.

I wondher why ye can always read a doctor's bill an ye niver can read his purscription.

If there were some deep principle that drove organic systems towards living systems, the operation of the principle should easily be demonstrable in a test tube in half a morning. Needless to say, no such demonstration has ever been given. Nothing happens when organic materials are subjected to the usual prescription of showers of electrical sparks or drenched in ultraviolet light, except the eventual production of a tarry sludge.

It is easy to get a thousand prescriptions, but hard to get one single remedy.

It is impossible to put together a single prescription that will cure all ailing bodies.

Medicine, like every useful science, should be thrown open to the observation and study of all. It should, in fact, like law and every important science, be made part of the primary education of the people.  We should at once explode the whole machinery of mystification and concealment—wigs, gold canes, and the gibberish of prescriptions—which serves but as a cloak to ignorance and legalized murder.

The doctor knows that it is the prescription slip itself, even more than what is written on it, that is often the vital ingredient for enabling a patient to get rid of whatever is ailing him.

The highest reach of science is, one may say, an inventive power, a faculty of divination, akin to the highest power exercised in poetry; therefore, a nation whose spirit is characterised by energy may well be eminent in science; and we have Newton. Shakspeare [sic] and Newton: in the intellectual sphere there can be no higher names. And what that energy, which is the life of genius, above everything demands and insists upon, is freedom; entire independence of all authority, prescription and routine, the fullest room to expand as it will.

The institutional goal of science is the extension of certified knowledge. The technical methods employed toward this end provide the relevant definition of knowledge: empirically confirmed and logically consistent predictions. The institutional imperatives (mores) derive from the goal and the methods. The entire structure of technical and moral norms implements the final objective. The technical norm of empirical evidence, adequate, valid and reliable, is a prerequisite for sustained true prediction; the technical norm of logical consistency, a prerequisite for systematic and valid prediction. The mores of science possess a methodologic rationale but they are binding, not only because they are procedurally efficient, but because they are believed right and good. They are moral as well as technical prescriptions. Four sets of institutional imperativesuniversalism, communism, disinterestedness, organized scepticismcomprise the ethos of modern science.

The late James McNeil Whistler had a French poodle of which he was extravagantly fond. This poodle was seized with an affection of the throat, and Whistler had the audacity to send for the great throat specialist, Mackenzie. Sir Morell, when he saw that he had been called to treat a dog, didn't like it much, it was plain. But he said nothing. He prescribed, pocketed a big fee, and drove away.
The next day he sent posthaste for Whistler. And Whistler, thinking he was summoned on some matter connected with his beloved dog, dropped his work and rushed like the wind to Mackenzie's. On his arrival Sir Morell said, gravely: How do you do, Mr. Whistler? I wanted to see you about having my front door painted.

Attributed or merely a legend. This anecdote wording is from 'Turn About Is Fair Play', Collier's (26 Mar 1904), 32, No. 26, 24, the earliest version the Webmaster has found so far. It has been variously reworded and printed in a number of books and magazines over the decades since, and is still circulated in the present day. The wording of Mackenzie's remark changes from one version to another, but remains true to the sense of it. In Medical Record (4 Jan 1913), 83, No. 1, 46, a reprinted column from The Universal Medical Record says: X relates that he has recently been watching through the weekly papers, of a story anent the artist Whistler and Sir mrell Mackenzie, which, curiously enough, starting in Paris, has now reached the American medical Journals and seems embarked on a long and active career. ... Mr. Ben Trovato, the eminent raconteur, seems for the moment at fault. Still, the natural history of such legends as this leads us to suppose that the story of the laryngologist and the poodle will continue to circulate, till after having served its day it falls on sleep, later to be revived by the journalists of the next generation about some heroes of to-day. Examples of other versions are in La Vulgarisation scientifique: revue mensuelle illustrée (1906); Don C. Seitz Whistler Stories (1913); Lewis C. Henry, Humorous Anecdotes About Famous People (1948); Graeme Garden The Best Medicine (1984); The Reader's Digest (1986), 128, Nos. 765-769, 40. So, in fact, this anecdote has, indeed, been revived for over a century, but is still narrated about Whistler and Mackenzie. Meanwhile, the column in the Medical Record mentioned above comments: Why Whistlerwhose brother, by-the-bye, was almost equally celebrated in the same department of medicineshould have desired the services of a laryngologist for his poodle, heaven only knows. So, whether to regard this as entirely legend, or perhaps having some foundation of truth, the Webmaster cannot say, but would like to hear from anyone with more historical background to add.

To find the cause of our ills in something outside ourselves, something specific that can be spotted and eliminated, is a diagnosis that cannot fail to appeal. To say that the cause of our troubles is not in us but in the Jews, and pass immediately to the extermination of the Jews, is a prescription likely to find a wide acceptance.

Until its results have gone through the painful process of publication, preferably in a refereed journal of high standards, scientific research is just play. Publication is an indispensable part of science. Publish or perish is not an indictment of the system of academia; it is a partial prescription for creativity and innovation. Sustained and substantial publication favors creativity. Novelty of conception has a large component of unpredictability. ... One is often a poor judge of the relative value of his own creative efforts. An artists ranking of his own works is rarely the same as that of critics or of history. Most scientists have had similar experiences. Ones supply of reprints for a pot-boiler is rapidly exhausted, while a major monograph that is ones pride and joy goes unnoticed. The strategy of choice is to increase the odds favoring creativity by being productive.

From interview with Anne Kalosh in her article 'Bringing Science Down to Earth', in Hemispheres (Oct 1994), 99. Collected and cited in Tom Head (ed.), Conversations with Carl Sagan (2006), 100. This was Sagans answer to her question, How does not understanding science cripple people in their daily lives.

Weve arranged a global civilization in which most critical elements profoundly depend on science and technology. We have also arranged things so that almost no one understands science and technology. This is a prescription for disaster. We might get away with it for a while, but sooner or later this combustible mixture of ignorance and power is going to blow up in our faces.

Who ever saw a doctor use the prescription of his colleague without cutting out or adding something?