δος μοι που στω και κινω την γην  Dos moi pou sto kai kino taen gaen (in epigram form, as given by Pappus, classical Greek).
δος μοι πα στω και τα γαν κινάσω  Dos moi pa sto kai tan gan kinaso (Doric Greek).
Give me a place to stand on and I can move the Earth.
About four centuries before Pappas, but about three centuries after Archimedes lived, Plutarch had written of Archimedes' understanding of the lever:
Archimedes, a kinsman and friend of King Hiero, wrote to him that with a given force, it was possible to move any given weight; and emboldened, as it is said, by the strength of the proof, he asserted that, if there were another world and he could go to it, he would move this one.
A commonly-seen expanded variation of the aphorism is:
Give me a lever long enough and a place to stand, and I can move the earth.

As attributed to Pappus (4th century A.D.) and Plutarch (c. 46-120 A.D.), in Sherman K. Stein, Archimedes: What Did He Do Besides Cry Eureka? (1999), 5, where it is also stated that Archimedes knew that ropes and pulley exploit the principle of the lever, where distance is traded for force. Eduard Jan Dijksterhuis, in his book, Archimedes (1956), Vol. 12., 15. writes that Hiero invited Archimedes to demonstrate his claim on a ship from the royal fleet, drawn up onto land and there loaded with a large crew and freight, and Archimedes easily succeeded. Thomas Little Heath in The Works of Archimedes (1897), xix-xx, states according to Athenaeus, the mechanical contrivance used was not pulleys as given by Plutarch, but a helix., Heath provides cites for Pappus Synagoge, Book VIII, 1060; Plutarch, Marcellus, 14; and Athenaeus v. 207 a-b. What all this boils down to, in the opinion of the Webmaster, is the last-stated aphorism would seem to be not the actual words of Archimedes (c. 287  212 B.C.), but restatements of the principle attributed to him, formed by other writers centuries after his lifetime.

Aphorisms, i. The original was written in Greek. This Latin translation, by Seneca (De Brevitate Vitae, 1.1), is in John Bartlett, Familiar Quotations (1905), 6, footnote 3. The sense is generally taken to be, 'Life is short, but to learn a profession (an art) takes a long time.'

Natura nihil agit frustra.
Nature does nothing in vain.

Beware of finding what you're looking for.
A favorite aphorism he often used.

Though widely seen attributed as a caution Hamming often used, webmaster has found no evidence that he originated the saying. If you know a primary source, please contact webmaster.

Finally, to the theme of the respiratory chain, it is especially noteworthy that David Kellin's chemically simple view of the respiratory chain appears now to have been right all alongand he deserves great credit for having been so reluctant to become involved when the energy-rich chemical intermediates began to be so fashionable. This reminds me of the aphorism: 'The obscure we see eventually, the completely apparent takes longer'.

If I may paraphrase Hobbes's well-known aphorism, I would say that 'books are the money of Literature, but only the counters of Science.'

If we couldnt laugh at ourselves, that would be the end of everything. 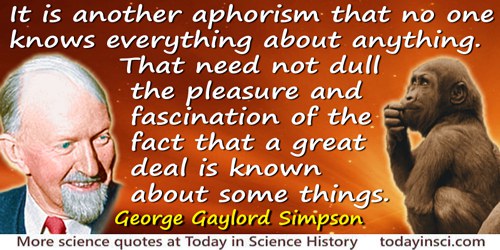 It is another aphorism that no one knows everything about anything. That need not dull the pleasure and fascination of the fact that a great deal is known about some things.

It is impossible to put together a single prescription that will cure all ailing bodies. 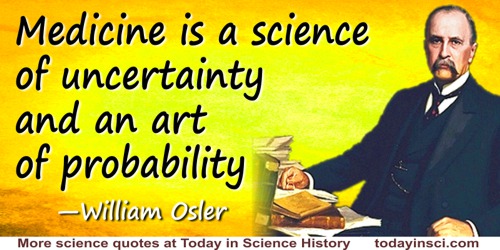 Medicine is a science of uncertainty and an art of probability.

No aphorism is more frequently repeated in connection with field trials, than that we must ask Nature few questions, or, ideally, one question, at a time. The writer is convinced that this view is wholly mistaken. Nature, he suggests, will best respond to a logical and carefully thought out questionnaire; indeed, if we ask her a single question, she will often refuse to answer until some other topic has been discussed.

Since the days of Hippocrates, our father, the aphorism has been the literary vehicle of the doctor Laymen have stolen the trick from time to time, but the aphorism remains the undisputed contribution of the doctor to literature.
[Coauthor with Ray Marr]

Tell me what you eat: I will tell you what you are.

The Philosopher in the Kitchen (1825), Aphorism iv.

The Philosopher in the Kitchen (1825), Aphorism ix.

The history of Western science confirms the aphorism that the great menace to progress is not ignorance but the illusion of knowledge.

Wit is the best safety valve modern man has evolved; the more civilization, the more repression, the more the need there is for wit.