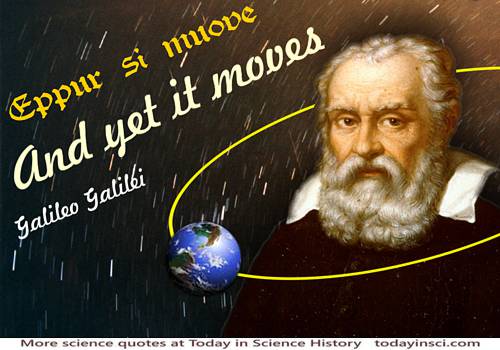 Eppur si muove.
And yet it does move.
Referring to the Earth. Apocryphal saying (of doubtful authenticity). By legend, Galileo whispered this to himself as he rose from kneeling after making his abjuration of heliocentricity.

No clear evidence exists that Galileo actually said these words, which may have been invented as stories about Galileo were circulated after his death. Seen in print as early as LAbbé Irailh, Querelles Littéraires [Literary quarrels] (Paris, 1761), Vol. 3, 49. As cited, with great skepticism, in John Joseph Fahie, Galileo, His Life and Work (1903), 325.

As a nation, we are too young to have true mythic heroes, and we must press real human beings into service. Honest Abe Lincoln the legend is quite a different character from Abraham Lincoln the man. And so should they be. And so should both be treasured, as long as they are distinguished. In a complex and confusing world, the perfect clarity of sports provides a focus for legitimate, utterly unambiguous support or disdain. The Dodgers are evil, the Yankees good. They really are, and have been for as long as anyone in my family can remember.

As I strayed into the study of an eminent physicist, I observed hanging against the wall, framed like a choice engraving, several dingy, ribbon-like strips of, I knew not what... My curiosity was at once aroused. What were they? ... They might be shreds of mummy-wraps or bits of friable bark-cloth from the Pacific, ... [or] remnants from a grandmothers wedding dress... They were none of these... He explained that they were carefully-prepared photographs of portions of the Solar Spectrum. I stood and mused, absorbed in the varying yet significant intensities of light and shade, bordered by mystic letters and symbolic numbers. As I mused, the pale legend began to glow with life. Every line became luminous with meaning. Every shadow was suffused with light shining from behind, suggesting some mighty achievement of knowledge; of knowledge growing more daring in proportion to the remoteness of the object known; of knowledge becoming more positive in its answers, as the questions which were asked seemed unanswerable. No Runic legend, no Babylonish arrowhead, no Egyptian hieroglyph, no Moabite stone, could present a history like this, or suggest thoughts of such weighty import or so stimulate and exalt the imagination.

Being in love with the one parent and hating the other are among the essential constituents of the stock of psychical impulses which is formed at that time and which is of such importance in determining the symptoms of the later neurosis... This discovery is confirmed by a legend that has come down to us from classical antiquity: a legend whose profound and universal power to move can only be understood if the hypothesis I have put forward in regard to the psychology of children has an equally universal validity. What I have in mind is the legend of King Oedipus and Sophocles' drama which bears his name.

Contrary to the legend, Darwin's finches do not appear to have inspired his earliest theoretical views on evolution, even after he finally became an evolutionist in 1837; rather it was his evolutionary views that allowed him, retrospectively, to understand the complex case of the finches.

I had rather believe all the Fables in the Legend, and the Talmud, and the Alcoran, then that this universall Frame, is without a Minde. And therefore, God never wrought Miracle, to convince Atheisme, because his Ordinary Works Convince it. It is true, that a little Philosophy inclineth Mans Minde to Atheisme; But depth in Philosophy, bringeth Mens Mindes about to Religion.

From Address (2 Nov 1908) at the University of Washington. Footnote: E.T. Bell attributes the same anecdote to J.S. Blackie, Professor of Greek at Aberdeen and Edinburgh. As quoted and cited in Robert Édouard Moritz, Memorabilia Mathematica; Or, The Philomaths Quotation-Book (1914), 180.

The order of ... successive generations is indeed much more clearly proved than many a legend which has assumed the character of history in the hands of man; for the geological record is the work of God.

The traditional mathematics professor of the popular legend is absentminded. He usually appears in public with a lost umbrella in each hand. He prefers to face a blackboard and to turn his back on the class. He writes a, he says b, he means c, but it should be d. Some of his sayings are handed down from generation to generation:
In order to solve this differential equation you look at it till a solution occurs to you.
This principle is so perfectly general that no particular application of it is possible.
Geometry is the science of correct reasoning on incorrect figures.
My method to overcome a difficulty is to go round it.
What is the difference between method and device? A method is a device which you used twice.

The world probably being of much greater antiquity than physical science has thought to be possible, it is interesting and harmless to speculate whether man has shared with the world its more remote history.  Some of the beliefs and legends which have come down to us from antiquity are so universal and deep-rooted that we have are accustomed to consider them almost as old as the race itself. One is tempted to inquire how far the unsuspected aptness of some of these beliefs and sayings to the point of view so recently disclosed is the result of mere chance or coincidence, and how far it may be evidence of a wholly unknown and unsuspected ancient civilization of which all other relic has disappeared.

In 'The Elixir of Life', The Interpretation of Radium: Being the Substance of Six Free Popular Lectures Delivered at the University of Glasgow (1909, 1912), 248-250. The original lectures of early 1908, were greatly edited, rearranged and supplemented by the author for the book form.

We are like the inhabitants of an isolated valley in New Guinea who communicate with societies in neighboring valleys (quite different societies, I might add) by runner and by drum. When asked how a very advanced society will communicate, they might guess by an extremely rapid runner or by an improbably large drum. They might not guess a technology beyond their ken. And yet, all the while, a vast international cable and radio traffic passes over them, around them, and through them... We will listen for the interstellar drums, but we will miss the interstellar cables. We are likely to receive our first messages from the drummers of the neighboring galactic valleys - from civilizations only somewhat in our future. The civilizations vastly more advanced than we, will be, for a long time, remote both in distance and in accessibility. At a future time of vigorous interstellar radio traffic, the very advanced civilizations may be, for us, still insubstantial legends.

We do live in a conceptual trough that encourages such yearning for unknown and romanticized greener pastures of other times. The future doesnt seem promising, if only because we can extrapolate some disquieting present trends in to further deterioration: pollution, nationalism, environmental destruction, and aluminum bats. Therefore, we tend to take refuge in a rose-colored past ... I do not doubt the salutary, even the essential, properties of this curiously adaptive human trait, but we must also record the down side. Legends of past golden ages become impediments when we try to negotiate our current dilemma.

We may need simple and heroic legends for that peculiar genre of literature known as the textbook. But historians must also labor to rescue human beings from their legends in scienceif only so that we may understand the process of scientific thought aright.

[In 1909,] Paris was the center of the aviation world. Aeronautics was neither an industry nor even a science; both were yet to come. It was an art and I might say a passion. Indeed, at that time it was a miracle. It meant the realization of legends and dreams that had existed for thousands of years and had been pronounced again and again as impossible by scientific authorities. Therefore, even the brief and unsteady flights of that period were deeply impressive. Many times I observed expressions of joy and tears in the eyes of witnesses who for the first time watched a flying machine carrying a man in the air.