Any one who has studied the history of science knows that almost every great step therein has been made by the “anticipation of Nature,” that is, by the invention of hypotheses, which, though verifiable, often had very little foundation to start with; and, not unfrequently, in spite of a long career of usefulness, turned out to be wholly erroneous in the long run.

Discoveries that are anticipated are seldom the most valuable.  Its the scientist free to pilot his vessel across hidden shoals into open seas who gives the best value.

From 'Why Our Scientific Discoveries Need to Surprise Us', in The Globe and Mail (1 Oct 2011).

Every well established truth is an addition to the sum of human power, and though it may not find an immediate application to the economy of every day life, we may safely commit it to the stream of time, in the confident anticipation that the world will not fail to realize its beneficial results.

I think that we shall have to get accustomed to the idea that we must not look upon science as a 'body of knowledge,' but rather as a system of hypotheses; that is to say, as a system of guesses or anticipations which in principle cannot be justified, but with which we work as long as they stand up to tests, and of which we are never justified in saying that we know they are 'true' or 'more or less certain' or even 'probable.'

In the course of normal speaking the inhibitory function of the will is continuously directed to bringing the course of ideas and the articulatory movements into harmony with each other. If the expressive movement which which follows the idea is retarded through mechanical causes, as is the case in writing ... such anticipations make their appearance with particular ease.

It is the object of science to replace, or save, experiences, by the reproduction and anticipation of facts in thought. Memory is handier than experience, and often answers the same purpose. This economical office of science, which fills its whole life, is apparent at first glance; and with its full recognition all mysticism in science disappears.

In 'The Economy of Science', The Science of Mechanics: A Critical and Historical Exposition of Its Principles (1893), 4.

From Address (2 Nov 1908) at the University of Washington. Footnote: E.T. Bell attributes the same anecdote to J.S. Blackie, Professor of Greek at Aberdeen and Edinburgh. As quoted and cited in Robert Édouard Moritz, Memorabilia Mathematica; Or, The Philomaths Quotation-Book (1914), 180. 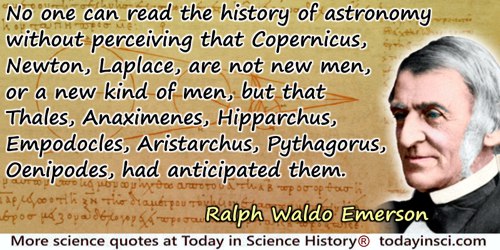 No one can read the history of astronomy without perceiving that Copernicus, Newton, Laplace, are not new men, or a new kind of men, but that Thales, Anaximenes, Hipparchus, Empodocles, Aristorchus, Pythagorus, Oenipodes, had anticipated them.

Science is not a system of certain, or -established, statements; nor is it a system which steadily advances towards a state of finality... And our guesses are guided by the unscientific, the metaphysical (though biologically explicable) faith in laws, in regularities which we can uncover—discover. Like Bacon, we might describe our own contemporary science—'the method of reasoning which men now ordinarily apply to nature'—as consisting of 'anticipations, rash and premature' and as 'prejudices'.

The most direct, and in a sense the most important, problem which our conscious knowledge of Nature should enable us to solve is the anticipation of future events, so that we may arrange our present affairs in accordance with such anticipation. As a basis for the solution of this problem we always make use of our knowledge of events which have already occurred, obtained by chance observation or by prearranged experiment.

There are, and can be, but these two ways of seeking truth; the former, the anticipatory, is the one now in use; the latter is the true but yet untried path.

Cited as Aphorism 19 in book review 'A Preliminary Discourse on the Study of Natural Philosophy' in The Quarterly Review (Jul 1831), 45, No. 90, 399. This appears to be an abridged version of Aphorism 20 shown on this web page.

To appreciate a work of art we need bring with us nothing from life, no knowledge of its ideas and affairs, no familiarity with its emotions. Art transports us from the world of mans activity to a world of æsthetic exaltation. For a moment we are shut off from human interests; our anticipations and memories are arrested; we are lifted above the stream of life. The pure mathematician rapt in his studies knows a state of mind which I take to be similar, if not identical. He feels an emotion for his speculations which arises from no perceived relation between them and the lives of men, but springs, inhuman or super-human, from the heart of an abstract science. I wonder, sometimes, whether the appreciators of art and of mathematical solutions are not even more closely allied.

To seek in the great accumulation of the already-said the text that resembles "in advance" a later text, to ransack history in order to rediscover the play of anticipations or echoes, to go right back to the first seeds or to go forward to the last traces, to reveal in a work its fidelity to tradition or its irreducible uniqueness, to raise or lower its stock of originality, to say that the Port -Royal grammarians invented nothing, or to discover that Cuvier had more predecessors than one thought, these are harmless enough amusements for historians who refuse to grow up.

Undoubtedly, the capstone of every mathematical theory is a convincing proof of all of its assertions. Undoubtedly, mathematics inculpates itself when it foregoes convincing proofs. But the mystery of brilliant productivity will always be the posing of new questions, the anticipation of new theorems that make accessible valuable results and connections. Without the creation of new viewpoints, without the statement of new aims, mathematics would soon exhaust itself in the rigor of its logical proofs and begin to stagnate as its substance vanishes. Thus, in a sense, mathematics has been most advanced by those who distinguished themselves by intuition rather than by rigorous proofs.

As quoted in Hermann Weyl, Unterrichtsblätter für Mathematik und Naturwissenschaften (1932), 38, 177-188. As translated by Abe Shenitzer, in 'Part I. Topology and Abstract Algebra as Two Roads of Mathematical Comprehension', The American Mathematical Monthly (May 1995), 102, No. 7, 453.

When autumn returns with its long anticipated holidays, and preparations are made for a scamper in some distant locality, hammer and notebook will not occupy much room in the portmanteau, and will certainly be found most entertaining company.

[The infinitely small] neither have nor can have theory; it is a dangerous instrument in the hands of beginners [ ... ] anticipating, for my part, the judgement of posterity, I would dare predict that this method will be accused one day, and rightly, of having retarded the progress of the mathematical sciences.

[The teaching of Nature] is harsh and wasteful in its operation. Ignorance is visited as sharply as wilful disobedienceincapacity meets with the same punishment as crime. Natures discipline is not even a word and a blow, and the blow first; but the blow without the word. It is left to you to find out why your ears are boxed.
The object of what we commonly call educationthat education in which man intervenes, and which I shall distinguish as artificial educationis to make good these defects in Natures methods; to prepare the child to receive Natures education, neither incapably, nor ignorantly, nor with wilful disobedience; and to understand the preliminary symptoms of her displeasure, without waiting for the box on the ear. In short, all artificial education ought to he an anticipation of natural education. And a liberal education is an artificial education, which has not only prepared a man to escape the great evils of disobedience to natural laws, but has trained him to appreciate and to seize upon the rewards, which Nature scatters with as free a hand as her penalties.

From Inaugural Address as Principal, South London Working Mens College, in 'A Liberal Education; and Where to Find it', Macmillan's Magazine (Mar 1868), 17, 370.