[About Francis Baily] The history of the astronomy of the nineteenth century will be incomplete without a catalogue of his labours. He was one of the founders of the Astronomical Society, and his attention to its affairs was as accurate and minute as if it had been a firm of which he was the chief clerk, with expectation of being taken into partnership. 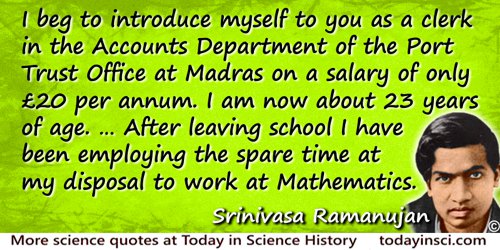 I beg to introduce myself to you as a clerk in the Accounts Department of the Port Trust Office at Madras on a salary of only £20 per annum. I am now about 23 years of age.  After leaving school I have been employing the spare time at my disposal to work at Mathematics.

Opening lines of first letter to G.H. Hardy (16 Jan 1913). In Collected Papers of Srinivasa Ramanujan (1927), xxiii. Hardy notes he did seem to remember his telling me that his friends had given him some assistance in writing the letter because Ramanujan's knowledge of English, at that stage of his life, could scarcely have been sufficient.

Liebig himself seems to have occupied the role of a gate, or sorting-demon, such as his younger contemporary Clerk Maxwell once proposed, helping to concentrate energy into one favored room of the Creation at the expense of everything else.

One scientific epoch ended and another began with James Clerk Maxwell.

Quoted in Robyn Arianrhod, Einstein's Heroes: Imagining the World Through the Language of Mathematics (2005), 272.

Someone poring over the old files in the United States Patent Office at Washington the other day found a letter written in 1833 that illustrates the limitations of the human imagination. It was from an old employee of the Patent Office, offering his resignation to the head of the department His reason was that as everything inventable had been invented the Patent Office would soon be discontinued and there would be no further need of his services or the services of any of his fellow clerks. He, therefore, decided to leave before the blow fell.

Written jokingly, to contrast with the burgeoning of American inventions in the new century. In 'Nothing More to Invent?', Scientific American (16 Oct 1915), 334. Compare that idea, expressed in 1915, with the classic myth still in endless recirculation today, Everything that can be invented, has been invented, for example, in Chris Morgan and David Langford, Facts and Fallacies (1981), on the Charles Duell Quotations page on this website, which includes references debunking the myth.

The aether: Invented by Isaac Newton, reinvented by James Clerk Maxwell. This is the stuff that fills up the empty space of the universe. Discredited and discarded by Einstein, the aether is now making a Nixonian comeback. Its really the vacuum, but burdened by theoretical, ghostly particles.

The maladies that affect the clerks aforesaid arise from three causes. First, constant sitting, secondly, the incessant movement of the the hand and always in the same direction, thirdly, the strain on the mind from the effort not to disfigure the books by errors or cause loss to their employers when they add, subtract, or do other sums in arithmetic. The diseases brought about by sitting constantly are easily understood; they are obstructions of the viscera, e.g. the liver and spleen, indigestion in the stomach, numbness of the legs, a considerable hindrance in the circulation of the blood, and an unhealthy habit.

This change in the conception of reality is the most profound and the most fruitful that physics has experienced since the time of Newton.
Refering to James Clerk Maxwell's contributions to physics.

'Maxwell's Influence on the Development of the Conception of Physical Reality', James Clerk Maxwell: A Commemorative Volume 1831-1931 (1931), 71.

To prove to an indignant questioner on the spur of the moment that the work I do was useful seemed a thankless task and I gave it up. I turned to him with a smile and finished, To tell you the truth we dont do it because it is useful but because its amusing. The answer was thought of and given in a moment: it came from deep down in my soul, and the results were as admirable from my point of view as unexpected. My audience was clearly on my side. Prolonged and hearty applause greeted my confession. My questioner retired shaking his head over my wickedness and the newspapers next day, with obvious approval, came out with headlines Scientist Does It Because Its Amusing! And if that is not the best reason why a scientist should do his work, I want to know what is. Would it be any good to ask a mother what practical use her baby is? That, as I say, was the first evening I ever spent in the United States and from that moment I felt at home. I realised that all talk about science purely for its practical and wealth-producing results is as idle in this country as in England. Practical results will follow right enough. No real knowledge is sterile. The most useless investigation may prove to have the most startling practical importance: Wireless telegraphy might not yet have come if Clerk Maxwell had been drawn away from his obviously useless equations to do something of more practical importance. Large branches of chemistry would have remained obscure had Willard Gibbs not spent his time at mathematical calculations which only about two men of his generation could understand. With this faith in the ultimate usefulness of all real knowledge a man may proceed to devote himself to a study of first causes without apology, and without hope of immediate return.

From lecture to a scientific society in Philadelphia on The Mechanism of the Muscle given by invitation after he received a Nobel Prize for that work. The quote is Hills response to a post-talk audience question asking disapprovingly what practical use the speaker thought there was in his research. The above quoted answer, in brief, isfor the intellectual curiosity. As quoted about Hill by Bernard Katz in his own autobiographical chapter, 'Sir Bernard Katz', collected in Larry R. Squire (ed.), The History of Neuroscience in Autobiography (1996), Vol. 1, 350-351. Two excerpts from the above have been highlighted as standalone quotes here in this same quote collection for A. V. Hill. They begin All talk about science and The most useless investigation may prove.

We have decided to call the entire field of control and communication theory, whether in the machine or in the animal, by the name Cybernetics, which we form from the Greek  for steersman. In choosing this term, we wish to recognize that the first significant paper on feedback mechanisms is an article on governors, which was published by Clerk Maxwell in 1868, and that governor is derived from a Latin corruption  We also wish to refer to the fact that the steering engines of a ship are indeed one of the earliest and best-developed forms of feedback mechanisms.

[1665-12-31] Thus ends this year ... It is true we have gone through great melancholy because of the great plague, and I put to great charges by it, by keeping my family long at Woolwich, and myself and another part of my family, my clerks, at my charge at Greenwich ... But now the plague is abated almost to nothing ... But many of such as I know very well, dead. Yet to our great joy, the town fills apace, and shops begin to open again. Pray God continue the plague's decrease - for that keeps the Court away from the place of business, and so all goes to wrack as to public matters, they at this distance not thinking of it.