Although few expressions are more commonly used in writing about science than science revolution, there is a continuing debate as to the propriety of applying the concept and term revolution to scientific change. There is, furthermore, a wide difference of opinion as to what may constitute a revolution. And although almost all historians would agree that a genuine alteration of an exceptionally radical nature (the Scientific Revolution) occurred in the sciences at some time between the late fifteenth (or early sixteenth) century and the end of the seventeenth century, the question of exactly when this revolution occurred arouses as much scholarly disagreement as the cognate question of precisely what it was.

I am of the decided opinion, that mathematical instruction must have for its first aim a deep penetration and complete command of abstract mathematical theory together with a clear insight into the structure of the system, and doubt not that the instruction which accomplishes this is valuable and interesting even if it neglects practical applications. If the instruction sharpens the understanding, if it arouses the scientific interest, whether mathematical or philosophical, if finally it calls into life an esthetic feeling for the beauty of a scientific edifice, the instruction will take on an ethical value as well, provided that with the interest it awakens also the impulse toward scientific activity. I contend, therefore, that even without reference to its applications mathematics in the high schools has a value equal to that of the other subjects of instruction.

I think all museums should be directed toward 12-year-old boys. Theyre the brightest group you can find and this is the age when you can arouse their curiosity and interest.

It does appear that on the whole a physicist tries to reduce his theory at all times to as few parameters as possible and is inclined to feel that a theory is a respectable one, though by no means necessarily correct, if in principle it does offer reasonably specific means for its possible refutation. Moreover the physicist will generally arouse the irritation amongst fellow physicists if he is not prepared to abandon his theory when it clashes with subsequent experiments. On the other hand it would appear that the chemist regards theoriesor perhaps better his theories (!) as far less sacrosanct, and perhaps in extreme cases is prepared to modify them continually as each bit of new experimental evidence comes in.

'Discussion: Physics and Chemistry: Comments on Caldin's View of Chemistry', British Journal of the Philosophy of Science, 1960, 11, 222.

No scientific subject has ever aroused quite the same mixture of hopes and fears [as atomic energy].

In Presidential address to the Annual Meeting of the British Association (Sep 1947), as quoted in Brian Austin, Schonland: Scientist and Soldier: From Lightning on the Veld to Nuclear Power at Harwell: The Life of Field Marshal Montgomery's Scientific Adviser (2010), 459.

The American, by nature, is optimistic. He is experimental, an inventor and a builder who builds best when called upon to build greatly. Arouse his will to believe in himself, give him a great goal to believe in, and he will create the means to reach it.

Given with date 1 Jan 1960 in Brian M. Thomsen, The Dream That Will Not Die: Inspiring Words of John, Robert, and Edward Kennedy (2010), 79. Webmaster has not seen a primary document for this quote. Although it is widely circulated, the origin is usually never cited. If you know the primary source, please contact Webmaster.

The discovery that viral genes cause cancer was made by Peyton Rous, a medical pathologist whose imagination was aroused when a chicken breeder brought him a hen with a tumor.

The solution of problems is one of the lowest forms of mathematical research,  yet its educational value cannot be overestimated. It is the ladder by which the mind ascends into higher fields of original research and investigation. Many dormant minds have been aroused into activity through the mastery of a single problem. 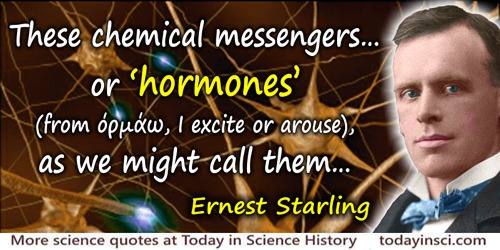 The specific character of the greater part of the toxins which are known to us (I need only instance such toxins as those of tetanus and diphtheria) would suggest that the substances produced for effecting the correlation of organs within the body, through the intermediation of the blood stream, might also belong to this class, since here also specificity of action must be a distinguishing characteristic. These chemical messengers, however, or 'hormones' (from όρμάω, I excite or arouse), as we might call them, have to be carried from the organ where they are produced to the organ which they affect by means of the blood stream and the continually recurring physiological needs of the organism must determine their repeated production and circulation through the body.

Wonder [admiratio astonishment, marvel] is a kind of desire for knowledge. The situation arises when one sees an effect and does not know its cause, or when the cause of the particular effect is one that exceeds his power of understanding. Hence, wonder is a cause of pleasure insofar as there is annexed the hope of attaining understanding of that which one wants to know. ... For desire is especially aroused by the awareness of ignorance, and consequently a man takes the greatest pleasure in those things which he discovers for himself or learns from the ground up.

From Summa Theologiae Question 32, 'The Causes of Pleasure,' Article 8, 'Is Pleasure Caused by Wondering.'(1a2ae 32.8). As translated in James Vincent Cunningham, Tragic Effect and Tragic Process in Some Plays of Shakespeare (1945). Also in The Collected Essays of J.V. Cunningham (1976), 72-73.