A definition of what we mean by probability.  The German Dictionary by Jakob and Wilhelm Grimm gives us detailed information: The Latin term probabilis, we are told, was at one time translated by like truth, or, by with an appearance of truth (mit einem Schein der Wahrheit). Only since the middle of the seventeenth century has it been rendered by wahrscheinlich (lit. truth-resembling).

Although few expressions are more commonly used in writing about science than science revolution, there is a continuing debate as to the propriety of applying the concept and term revolution to scientific change. There is, furthermore, a wide difference of opinion as to what may constitute a revolution. And although almost all historians would agree that a genuine alteration of an exceptionally radical nature (the Scientific Revolution) occurred in the sciences at some time between the late fifteenth (or early sixteenth) century and the end of the seventeenth century, the question of exactly when this revolution occurred arouses as much scholarly disagreement as the cognate question of precisely what it was.

By the fruit one judges the tree; the tree of science grows exceedingly slowly; centuries elapse before one can pluck the ripe fruits; even today it is hardly possible for us to shell and appraise the kernel of the teachings that blossomed in the seventeenth century. He who sows cannot therefore judge the worth of the corn. He must have faith in the fruitfulness of the seed in order that he may follow untiringly his chosen furrow when he casts his ideas to the four winds of heaven.

Children are told that an apple fell on Isaac Newtons head and he was led to state the law of gravity. This, of course, is pure foolishness. What Newton discovered was that any two particles in the universe attract each other with a force that is proportional to the product of their masses and inversely proportional to the square of the distance between them. This is not learned from a falling apple, but by observing quantities of data and developing a mathematical theory that can be verified by additional data. Data gathered by Galileo on falling bodies and by Johannes Kepler on motions of the planets were invaluable aids to Newton. Unfortunately, such false impressions about science are not universally outgrown like the Santa Claus myth, and some people who dont study much science go to their graves thinking that the human race took until the mid-seventeenth century to notice that objects fall.

He [Winston Churchill] is rather like a layer cake. One layer was certainly seventeenth century. The eighteenth century in him is obvious. There was the nineteenth century, and a large slice, of course, of the twentieth century; and another, curious, layer which may possibly have been the twenty-first.

How strange it would be if the final theory were to be discovered in our lifetimes! The discovery of the final laws of nature will mark a discontinuity in human intellectual history, the sharpest that has occurred since the beginning of modern science in the seventeenth century. Can we now imagine what that would be like?

It is not, indeed, strange that the Greeks and Romans should not have carried ... any ... experimental science, so far as it has been carried in our time; for the experimental sciences are generally in a state of progression. They were better understood in the seventeenth century than in the sixteenth, and in the eighteenth century than in the seventeenth. But this constant improvement, this natural growth of knowledge, will not altogether account for the immense superiority of the modern writers. The difference is a difference not in degree, but of kind. It is not merely that new principles have been discovered, but that new faculties seem to be exerted. It is not that at one time the human intellect should have made but small progress, and at another time have advanced far; but that at one time it should have been stationary, and at another time constantly proceeding. In taste and imagination, in the graces of style, in the arts of persuasion, in the magnificence of public works, the ancients were at least our equals. They reasoned as justly as ourselves on subjects which required pure demonstration.

One day in the year 1666 Newton had gone to the country, and seeing the fall of an apple, [as his niece (Mme Conduit) told me,] let himself be led into a deep meditation on the cause which thus draws every object along a line whose extension would pass almost through the center of the Earth.

From the original French, Un jour, en l'année 1666, Newton, retiré à la campagne, et voyant tomber des fruits dun arbre, à ce que m'a conté sa nièce, (Mme Conduit) se laissa aller à une méditation profonde sur la cause qui entraîne ainsi tous les corps dans une ligne qui, si elle était prolongée, passerait à peu près par le centre de la Terre, in Éléments de Philosophie de Newton, Part 1, Chap. 3, in Oeuvres Completes de Voltaire (1785), Vol. 31, 175. Translation as given in an epigraph, in Charles W. Misner, Kip S. Thorn and John Archibald Wheeler, Gravitation (1970, 1973), 47. An alternate translation is: One day in the year 1666, Newton went into the country, and seeing fruit fall from a tree (as his niece, Madame Conduit, has informed me), entered into a profound train of thought as to the causes which could lead to such a drawing together or attraction. As given in Robert Chambers (ed.), The Book of Days: A Miscellany of Popular Antiquities in Connection with the Calendar (1888), Vol. 2, 757. (Note: Voltaire originally published his Éléments in 1738, but Webmaster could not find the above quote in it.)

Professor Whitehead has recently restored a seventeenth century phrase"climate of opinion." The phrase is much needed. Whether arguments command assent or not depends less upon the logic that conveys them than upon the climate of opinion in which they are sustained. 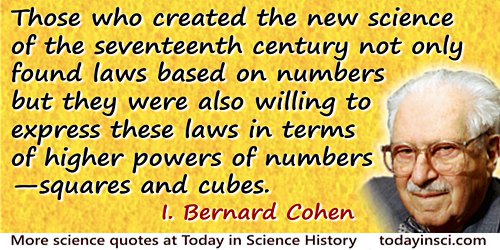 The ancients knew a few  numerical laws. But prior to the Scientific Revolution, the goal of science (or the study of nature) was not to seek laws of nature expressed in terms of numbers or number relations. Those who created the new science of the seventeenth century not only found laws based on numbers but they were also willing to express these laws in terms of higher powers of numberssquares and cubes.

From The Triumph of Numbers: How Counting Shaped Modern Life (2005), 37. The second ellipsis is for examples of those laws: the law of reflection of light, the law of the lever, and the law of buoyancy. 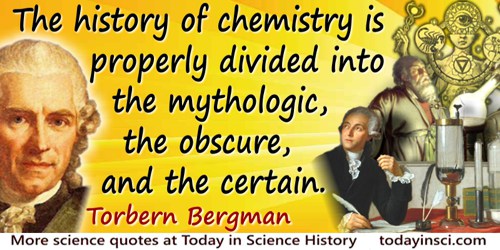 The pioneering practitioners of the new science [of the seventeenth century] knew that they were producing a new kind of knowledge and so they declared this newness in the titles of their books and articles. Thus we have Galileos Two New Sciences, Boyles New Experiments, Keplers New Astronomy, and Tartaglias New Science. 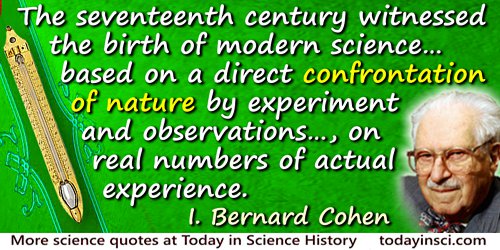 The seventeenth century witnessed the birth of modern science as we know it today. This science was something new, based on a direct confrontation of nature by experiment and observation. But there was another feature of the new sciencea dependence on numbers, on real numbers of actual experience.

There are, as we have seen, a number of different modes of technological innovation. Before the seventeenth century inventions (empirical or scientific) were diffused by imitation and adaption while improvement was established by the survival of the fittest. Now, technology has become a complex but consciously directed group of social activities involving a wide range of skills, exemplified by scientific research, managerial expertise, and practical and inventive abilities. The powers of technology appear to be unlimited. If some of the dangers may be great, the potential rewards are greater still. This is not simply a matter of material benefits for, as we have seen, major changes in thought have, in the past, occurred as consequences of technological advances.

To Descartes, the great philosopher of the 17th century, is due the undying credit of having removed the bann which until then rested upon geometry. The analytical geometry, as Descartes method was called, soon led to an abundance of new theorems and principles, which far transcended everything that ever could have been reached upon the path pursued by the ancients.

[There was] in some of the intellectual leaders a great aspiration to demonstrate that the universe ran like a piece of clock-work, but this was was itself initially a religious aspiration. It was felt that there would be something defective in Creation itselfsomething not quite worthy of Godunless the whole system of the universe could be shown to be interlocking, so that it carried the pattern of reasonableness and orderliness. Kepler, inaugurating the scientists quest for a mechanistic universe in the seventeenth century, is significant herehis mysticism, his music of the spheres, his rational deity demand a system which has the beauty of a piece of mathematics.