In Description des projets et de la construction des ponts de Neuilli, de Mantes, d'OrlĂ©ans, de Louis XVI, etc. (1777, New ed. 1788), 630. Translated by D. B. Steinman, as quoted in 'Some Reflections on the architecture of Bridges', Engineering and Contracting (26 Dec 1917), 48, No. 26, 536. Also seen translated as, â€śA great bridge is a great monument which should serve to make known the splendour and genius of a nation; one should not occupy oneself with efforts to perfect it architecturally, for taste is always susceptible to change, but to conserve always in its form and decoration the character of solidity which is proper.â€ť

A religion old or new, that stressed the magnificence of the universe as revealed by modern science, might be able to draw forth reserves of reverence and awe hardly tapped by the conventional faiths. Sooner or later such a religion will emerge.

Any fool can destroy trees. They cannot run away; and if they could, they would still be destroyed,â€”chased and hunted down as long as fun or a dollar could be got out of their bark hides, branching horns, or magnificent bole backbones. Few that fell trees plant them; nor would planting avail much towards getting back anything like the noble primeval forests. During a manâ€™s life only saplings can be grown, in the place of the old treesâ€”tens of centuries oldâ€”that have been destroyed. 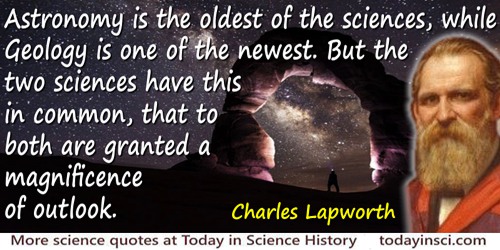 Astronomy concerns itself with the whole of the visible universe, of which our earth forms but a relatively insignificant part; while Geology deals with that earth regarded as an individual. Astronomy is the oldest of the sciences, while Geology is one of the newest. But the two sciences have this in common, that to both are granted a magnificence of outlook, and an immensity of grasp denied to all the rest.

Proceedings of the Geological Society of London (1903), 59, lxviii. 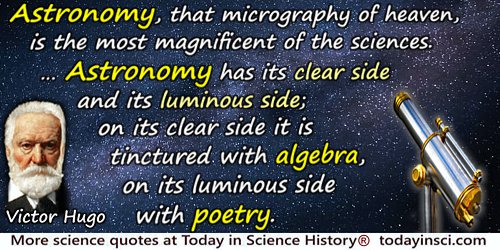 I saw them; there is nothing beautiful about them, just that they are a little higher than the others.
Referring to one of the oldest and loveliest groves of redwoods, showing insensitivity to their magnificence.

If and when all the laws governing physical phenomena are finally discovered, and all the empirical constants occurring in these laws are finally expressed through the four independent basic constants, we will be able to say that physical science has reached its end, that no excitement is left in further explorations, and that all that remains to a physicist is either tedious work on minor details or the self-educational study and adoration of the magnificence of the completed system. At that stage physical science will enter from the epoch of Columbus and Magellan into the epoch of the National Geographic Magazine!

It is not, indeed, strange that the Greeks and Romans should not have carried ... any ... experimental science, so far as it has been carried in our time; for the experimental sciences are generally in a state of progression. They were better understood in the seventeenth century than in the sixteenth, and in the eighteenth century than in the seventeenth. But this constant improvement, this natural growth of knowledge, will not altogether account for the immense superiority of the modern writers. The difference is a difference not in degree, but of kind. It is not merely that new principles have been discovered, but that new faculties seem to be exerted. It is not that at one time the human intellect should have made but small progress, and at another time have advanced far; but that at one time it should have been stationary, and at another time constantly proceeding. In taste and imagination, in the graces of style, in the arts of persuasion, in the magnificence of public works, the ancients were at least our equals. They reasoned as justly as ourselves on subjects which required pure demonstration.

Perhaps the greatest joy of flying is the magnificence of the view. â€¦ Colors stand out and the shades of the earth, unseen from below, form an endless magic carpet. If anyone really wishes to see the seasonsâ€™ changes, he should fly. Autumn turns its most flaming leaves upward and spring hints its coming first for birds and aviators.

Science is a magnificent force, but it is not a teacher of morals. It can perfect machinery, but it adds no moral restraints to protect society from the misuse of the machine. It can also build gigantic intellectual ships, but it constructs no moral rudders for the control of storm tossed human vessel. It not only fails to supply the spiritual element needed but some of its unproven hypotheses rob the ship of its compass and thus endangers its cargo.

Proposed summation written for the Scopes Monkey Trial (1925), in Genevieve Forbes Herrick and John Origen Herrick ,The Life of William Jennings Bryan (1925), 405. This speech was prepared for delivery at the trial, but was never heard there, as both sides mutually agreed to forego arguments to the jury.

The highest of the worldâ€™s mountains, it seems, has to make but a single gesture of magnificence to be the lord of all, vast in unchallenged and isolated supremacy.

The most powerful drive in the ascent of man is his pleasure in his own skill. He loves to do what he does well and, having done it well, he loves to do it better. You see it in his science. You see it in the magnificence with which he carves and builds, the loving care, the gaiety, the effrontery. The monuments are supposed to commemorate kings and religions, heroes, dogmas, but in the end the man they commemorate is the builder.

The science of mathematics performs more than it promisesâ€¦. The study of the mathematics, like the Nile, begins in minuteness, but ends in magnificence.

When I behold a fashionable table set out in all its magnificence, I fancy that I see gouts and dropsies, fevers and lethargies, with other innumerable distempers lying in ambuscade among the dishes. Nature delights in the most plain and simple diet. Every animal but man keeps to one dish. Herbs are the food of this species, fish of that, and flesh of a third. Man falls upon everything that comes in his way; not the smallest fruit or excrescence of the earth, scarce a berry or a mushroom can escape him.