Any fool can destroy trees. They cannot run away; and if they could, they would still be destroyed,â€”chased and hunted down as long as fun or a dollar could be got out of their bark hides, branching horns, or magnificent bole backbones. Few that fell trees plant them; nor would planting avail much towards getting back anything like the noble primeval forests. During a manâ€™s life only saplings can be grown, in the place of the old treesâ€”tens of centuries oldâ€”that have been destroyed.

As a career, the business of an orthodox preacher is about as successful as that of a celluloid dog chasing an asbestos cat through hell.

A Thousand & One Epigrams: Selected from the Writings of Elbert Hubbard (1911), 110. Celluloid, an early plastic, known by that name since 1872 and used for early film stock, is noted for its flammability.

But weightier still are the contentment which comes from work well done, the sense of the value of science for its own sake, insatiable curiosity, and, above all, the pleasure of masterly performance and of the chase. These are the effective forces which move the scientist. The first condition for the progress of science is to bring them into play.

from his preface to Claude Bernard's 'Experimental Medicine' 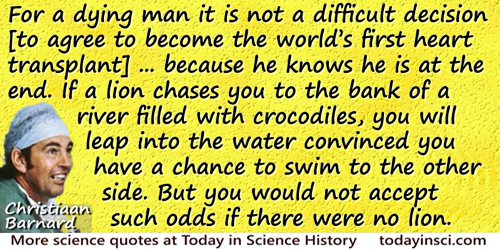 For a dying man it is not a difficult decision [to agree to become the world's first heart transplant] â€¦ because he knows he is at the end. If a lion chases you to the bank of a river filled with crocodiles, you will leap into the water convinced you have a chance to swim to the other side. But you would not accept such odds if there were no lion.

I have never really had dreams to fulfilâ€¦. You just want to go on looking at these ecosystems and trying to understand them and they are all fascinating. To achieve a dream suggests snatching a prize from the top of a tree and running off with it, and thatâ€™s the end of it. It isnâ€™t like that. â€¦ What you are trying to achieve is understanding and you donâ€™t do that just by chasing dreams.

Mathematical research, with all its wealth of hidden treasure, is all too apt to yield nothing to our research: for it is haunted by certain ignes fatuiâ€”delusive phantoms, that float before us, and seem so fair, and are all but in our grasp, so nearly that it never seems to need more than one step further, and the prize shall be ours! Alas for him who has been turned aside from real research by one of these spectresâ€”who has found a music in its mocking laughterâ€”and who wastes his life and energy on the desperate chase!

Written without pseudonym as Charles L. Dodgson, in Introduction to A New Theory of Parallels (1888, 1890), xvi. Note: Ignes fatui, the plural of ignes fatuus (foolish fire), refers to a will-o'-the-wisp: something deceptive or deluding.

Oh, I have slipped the surly bonds of earth
and danced the skies on laughter-silvered wings;
Sunward Iâ€™ve climbed, and joined the tumbling mirth
of sun-split clouds and done a hundred things
you have not dreamed of wheeled and soared and swung
high in the sunlit silence. Hovering there,
Iâ€™ve chased the shouting wind along, and flung
my eager craft through footless halls of air.
Up, up the long, delirious, burning blue
Iâ€™ve topped the windswept heights with easy grace
where never lark, or even eagle flew
and, while with silent, lifting mind Iâ€™ve trod
the high untrespassed sanctity of space,
put out my hand, and touched the face of God.

So long as the fur of the beaver was extensively employed as a material for fine hats, it bore a very high price, and the chase of this quadruped was so keen that naturalists feared its speedy consideration. When a Parisian manufacturer invented the silk hat, which soon came into almost universal use, the demand for beavers' fur fell off, and this animalâ€“whose habits, as we have seen, are an important agency in the formation of bogs and other modifications of forest natureâ€“immediately began to increase, reappeared in haunts which we had long abandoned, and can no longer be regarded as rare enough to be in immediate danger of extirpation. Thus the convenience or the caprice of Parisian fashion has unconsciously exercised an influence which may sensibly affect the physical geography of a distant continent.

The last few meters up to the summit no longer seem so hard. On reaching the top, I sit down and let my legs dangle into space. I donâ€™t have to climb anymore. I pull my camera from my rucksack and, in my down mittens, fumble a long time with the batteries before I have it working properly. Then I film Peter. Now, after the hours of torment, which indeed I didnâ€™t recognize as torment, now, when the monotonous motion of plodding upwards is at an end, and I have nothing more to do than breathe, a great peace floods my whole being. I breathe like someone who has run the race of his life and knows that he may now rest forever. I keep looking all around, because the first time I didnâ€™t see anything of the panorama I had expected from Everest, neither indeed did I notice how the wind was continually chasing snow across the summit. In my state of spiritual abstraction, I no longer belong to myself and to my eyesight. I am nothing more than a single, narrow, gasping lung, floating over the mists and the summits.

We are always chasing after things that other companies won't touch. That is a big secret to our success.
[About Sony, 1998]

We have only indirect means of knowing the courage and activity of the Neanderthals in the chase, through the bones of animals hunted for food which are found intermingled with the flints around their ancient hearths.

We urgently need [the landmark National Ocean Policy] initiative, as we use our oceans heavily: Cargo ships crisscross the sea, carrying goods between continents. Commercial and recreational fishing boats chase fish just offshore. Cruise ships cruise. Oil and gas drilling continues, but hopefully we will add renewable energy projects as well. Without planning, however, these various industrial activities amount to what we call â€śocean sprawl,â€ť steamrolling the resources we rely upon for our livelihoods, food, fun, and even the air we breathe. While humankind relies on many of these industries, we also need to keep the natural riches that support them healthy and thriving. As an explorer, I know firsthand there are many places in the ocean so full of life that they should be protected.

Without the cultivation of the earth, [man] is, in all countries, a savage. Until he gives up the chase, and fixes himself in some place and seeks a living from the earth, he is a roaming barbarian. When tillage begins, other arts follow. The farmers, therefore, are the founders of human civilization.

â€śYou know that it is quite preposterous of you to chase rainbows,â€ť said the sane person to the poet.
â€śYet it would be rather beautiful if I did one day manage to catch one,â€ť mused the poet.