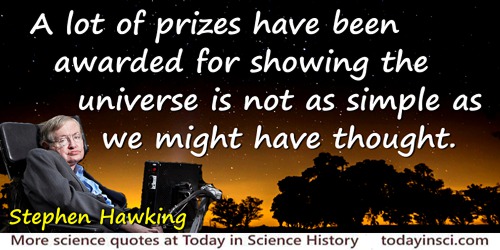 Far and away the best prize that life has to offer is the chance to work hard at work worth doing.

Far must thy researches go
Wouldst thou learn the world to know;
Thou must tempt the dark abyss
Wouldst thou prove what Being is;
Naught but firmness gains the prize,
Naught but fullness makes us wise,
Buried deep truth ever lies!

I have never really had dreams to fulfil. You just want to go on looking at these ecosystems and trying to understand them and they are all fascinating. To achieve a dream suggests snatching a prize from the top of a tree and running off with it, and thats the end of it. It isnt like that.  What you are trying to achieve is understanding and you dont do that just by chasing dreams.

It startled him even more when just after he was awarded the Galactic Institutes Prize for Extreme Cleverness he got lynched by a rampaging mob of respectable physicists who had finally realized that the one thing they really couldn't stand was a smart-ass.

Mathematical research, with all its wealth of hidden treasure, is all too apt to yield nothing to our research: for it is haunted by certain ignes fatuidelusive phantoms, that float before us, and seem so fair, and are all but in our grasp, so nearly that it never seems to need more than one step further, and the prize shall be ours! Alas for him who has been turned aside from real research by one of these spectreswho has found a music in its mocking laughterand who wastes his life and energy on the desperate chase!

Written without pseudonym as Charles L. Dodgson, in Introduction to A New Theory of Parallels (1888, 1890), xvi. Note: Ignes fatui, the plural of ignes fatuus (foolish fire), refers to a will-o'-the-wisp: something deceptive or deluding.

More than the diamond Koh-i-noor, which glitters among their crown jewels, they prize the dull pebble which is wiser than a man, whose poles turn themselves to the poles of the world, and whose axis is parallel to the axis of the world. Now, their toys are steam and galvanism.

English Traits (1856), 47. The “dull pebble” refers to lodestone and its magnetic properties.

Science only offers three kinds of interest: 1. Technical applications. 2. A game of chess. 3. A road to God. (Attractions are added to the game of chess in the shape of competitions, prizes, and medals.) 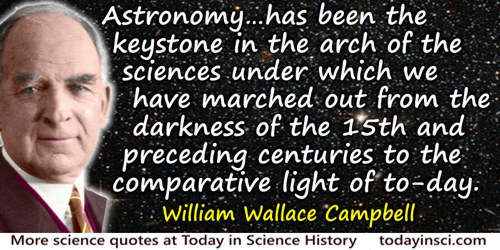 That the main results of the astronomers work are not so immediately practical does not detract from their value. They are, I venture to think, the more to be prized on that account. Astronomy has profoundly influenced the thought of the race. In fact, it has been the keystone in the arch of the sciences under which we have marched out from the darkness of the fifteenth and preceding centuries to the comparative light of to-day.

The following story (here a little softened from the vernacular) was narrated by Lord Kelvin himself when dining at Trinity Hall:
A certain rough Highland lad at the university had done exceedingly well, and at the close of the session gained prizes both in mathematics and in metaphysics. His old father came up from the farm to see his son receive the prizes, and visited the College. Thomson was deputed to show him round the place. Weel, Mr. Thomson, asked the old man, and what may these mathematics be, for which my son has getten a prize? I told him, replied Thomson, that mathematics meant reckoning with figures, and calculating. Oo ay, said the old man, hell ha getten that fra me: I were ever a braw hand at the countin. After a pause he resumed: And what, Mr. Thomson, might these metapheesics be? I endeavoured, replied Thomson, to explain how metaphysics was the attempt to express in language the indefinite. The old Highlander stood still and scratched his head. Oo ay: may be hell ha getten that fra his mither. She were aye a bletherin body."

The microwave oven is the consolation prize in our struggle to understand physics.

When scientists discovered that liquid water, which brought forth life on Earth, exists nowhere else in great quantities in the solar system, the most significant lesson they taught was not that water, or the life that depends on it, is necessarily the result of some chemical accident in space; their most important revelation was that water is rare in infinity, that we should prize it, preserve it, conserve it.

In Jacques Cousteau and Susan Schiefelbein, The Human, the Orchid, and the Octopus: Exploring and Conserving Our Natural World (2007), 201-202.

Yesterday, a small white keel feather escaped from my goose and lodged in the bank boughs near the kitchen porch, where I spied it as I came home in the cold twilight. The minute I saw the feather, I was projected into May, knowing a barn swallow would be along to claim the prize and use it to decorate the front edge of its nest. Immediately, the December air seemed full of wings of swallows and the warmth of barns.