A fat kitchin, a lean Will.

If needed to give a comparison expressing my feelings about the science of life, I would say that it is a magnificent reception room, resplendent with light, which one can only reach by passing through a long and dreadful kitchen.

On the morning of 1 November 1956 the US physicist John Bardeen dropped the frying-pan of eggs that he was cooking for breakfast, scattering its contents on the kitchen floor. He had just heard that he had won the Nobel Prize for Physics along with William Shockley and Walter Brattain for their invention of the transistor. That evening Bardeen was startled again, this time by a parade of his colleagues from the University of Illinois marching to the door of his home bearing champagne and singing For Hes a Jolly Good Fellow. 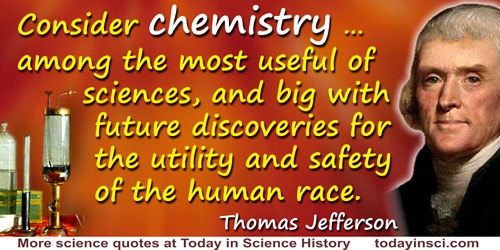 Speaking one day to Monsieur de Buffon, on the present ardor of chemical inquiry, he affected to consider chemistry but as cookery, and to place the toils of the laboratory on the footing with those of the kitchen. I think it, on the contrary, among the most useful of sciences, and big with future discoveries for the utility and safety of the human race.

The oldest empires,what we called venerable antiquity, now that we have true measures of duration, show like creations of yesterday.  The old six thousand years of chronology become a kitchen clock,no more a measure of time than an hour-glass or an egg-glass,since the duration of geologic periods has come into view.

The science of life is a superb and dazzlingly lighted hall which may be reached only by passing through a long and ghastly kitchen.

There is a noble vision of the great Castle of Mathematics, towering somewhere in the Platonic World of Ideas, which we humbly and devotedly discover (rather than invent). The greatest mathematicians manage to grasp outlines of the Grand Design, but even those to whom only a pattern on a small kitchen tile is revealed, can be blissfully happy.  Mathematics is a proto-text whose existence is only postulated but which nevertheless underlies all corrupted and fragmentary copies we are bound to deal with. The identity of the writer of this proto-text (or of the builder of the Castle) is anybodys guess.

We have dominated and overruled nature, and from now on the earth is ours, a kitchen garden until we learn to make our own chlorophyll and float it out in the sun inside plastic mebranes. We will build Scarsdale on Mount Everest.

Yesterday, a small white keel feather escaped from my goose and lodged in the bank boughs near the kitchen porch, where I spied it as I came home in the cold twilight. The minute I saw the feather, I was projected into May, knowing a barn swallow would be along to claim the prize and use it to decorate the front edge of its nest. Immediately, the December air seemed full of wings of swallows and the warmth of barns.

You cant [have pets], when you go away filming for weeks, [but] I have great crested newts in the pond, and a darling robin that comes in the kitchen.