A mathematician is a device for turning coffee into theorems.

In D. S. Richeson, Euler's Gem: The Polyhedron Formula and the Birth of Topology (2008), Preface, ix. Also attributed incorrectly to Paul Erdos, who did often repeat it.

A story about the Jack Spratts of medicine [was] told recently by Dr. Charles H. Best, co-discoverer of insulin. He had been invited to a conference of heart specialists in North America. On the eve of the meeting, out of respect for the fat-clogs-the-arteries theory, the delegates sat down to a special banquet served without fats. It was unpalatable but they all ate it as a duty. Next morning Best looked round the breakfast room and saw these same specialists—all in the 40-60 year old, coronary age group—happily tucking into eggs, bacon, buttered toast and coffee with cream.

A topologist is one who doesnâ€™t know the difference between a doughnut and a coffee cup.

After Goethe had expressed to me his greatest satisfaction regarding the account of the man [whom Iâ€™d] rescued [from serving in Napoleonâ€™s army] by apparent â€śblack starâ€ť [i.e., amaurosis, blindness] as well as the other, he handed me a carton of coffee beans, which a Greek had sent him as a delicacy. â€śYou can also use these in your investigations,â€ť said Goethe. He was right; for soon thereafter I discovered therein caffeine, which became so famous on account of its high nitrogen content.

Paper to the American Chemical Society, 'Pollution, Pesticides and Cancer Misconceptions.' As cited by Art Drysdale, 'Latest Insider News: Natural vs. Synthetic Chemical Pesticides' (14 Feb 1999), on the mitosyfraudes.org website. Bruce Ames has delivered a similar statistic in various other publications.

Daniel Bernoulli used to tell two little adventures, which he said had given him more pleasure than all the other honours he had received. Travelling with a learned stranger, who, being pleased with his conversation, asked his name; â€śI am Daniel Bernoulli,â€ť answered he with great modesty; â€śand I,â€ť said the stranger (who thought he meant to laugh at him) â€śam Isaac Newton.â€ť Another time, having to dine with the celebrated Koenig, the mathematician, who boasted, with some degree of self-complacency, of a difficult problem he had solved with much trouble, Bernoulli went on doing the honours of his table, and when they went to drink coffee he presented Koenig with a solution of the problem more elegant than his own. 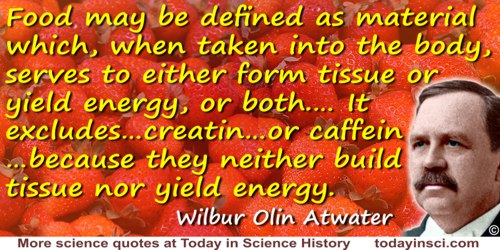 Methods and Results of Investigations on the Chemistry and Economy of Food, Bulletin 21, US Department of Agriculture (1895). Quoted in Ira Wolinsky, Nutrition in Exercise and Sport (1998), 36.

Many kinds of monkeys have a strong taste for tea, coffee and spirituous liqueurs.

Not only such Actions as were at first Indifferent to us, but even such as were Painful, will by Custom and Practice become Pleasant. Sir Francis Bacon observes in his Natural Philosophy, that our Taste is never pleased better, than with those things which at first created a Disgust in it. He gives particular Instances of Claret, Coffee, and other Liquors, which the Palate seldom approves upon the first Taste; but when it has once got a Relish of them, generally retains it for Life. 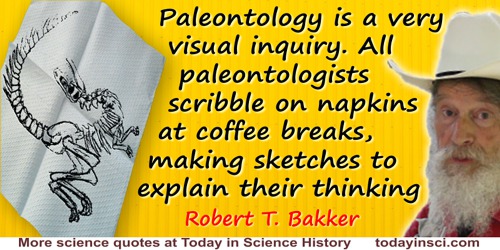 Paleontology is a very visual inquiry. All paleontologists scribble on napkins at coffee breaks, making sketches to explain their thinking

Science is, on the whole, an informal activity, a life of shirt sleeves and coffee served in beakers.

The Pleistocene spearhead flaked from pink flint that I display on my coffee table was the high technology of its day, as sophisticated and efficient as a samuri sword or a fighter jet.

Weâ€™re proud of humanityâ€™s powers,
But these potions and medicine of ours,
Coffee, garlic, and spices
Evolved as devices
So that insects would stop bugging flowers.

When you see the natural and almost universal craving in English sick for their 'tea,' you cannot but feel that nature knows what she is about. â€¦ [A] little tea or coffee restores them. â€¦ [T]here is nothing yet discovered which is a substitute to the English patient for his cup of tea.