...I may perhaps venture a short word on the question much discussed in certain quarters, whether in the work of excavation it is a good thing to have cooperation between men and women ... Of a mixed dig ... I have seen something, and it is an experiment that I would be reluctant to try again. I would grant if need be that women are admirable fitted for the work, yet I would uphold that they should undertake it by themselves ... the work of an excavator on the dig and off it lays on those who share it a bond of closer daily intercourse than is conceivable ... between men and women, except in chance cases, I do not believe that such close and unavoidable companionship can ever be other than a source of irritation; at any rate, I believe that however it may affect women, the ordinary male at least cannot stand it ... A minor ... objection lies in one particular form of contraint ... moments will occur on the best regulated dig when you want to say just what you think without translation, which before the ladies, whatever their feelings about it, cannot be done.

An amino acid residue (other than glycine) has no symmetry elements. The general operation of conversion of one residue of a single chain into a second residue equivalent to the first is accordingly a rotation about an axis accompanied by translation along the axis. Hence the only configurations for a chain compatible with our postulate of equivalence of the residues are helical configurations.
[Co-author with American chemist, ert B. Corey (1897-1971) and H. R. Branson]

'The Structure of Proteins: Two Hydrogen-bonded Helical Configurations of the Polypeptide Chain', Proceedings of the National Academy of Sciences of the United States of America (1951), 37, 206.

Doubtless many can recall certain books which have greatly influenced their lives, and in my own case one stands out especiallyâ€”a translation of Hofmeister's epoch-making treatise on the comparative morphology of plants. This book, studied while an undergraduate at the University of Michigan, was undoubtedly the most important factor in determining the trend of my botanical investigation for many years.

D.H. Campbell, 'The Centenary of Wilhelm Hofmeister', Science (1925), 62, No. 1597, 127-128. Cited in William C. Steere, Obituary, 'Douglas Houghton Campbell', American Bryological and Lichenological Society, The Bryologist (1953), 127. The book to which Cambell refers is W. Hofmeister, On the Germination, Development, and Fructification of the Higher Cryptogamia, and on the Fructification of the Coniferae, trans. by Frederick Currey (1862). 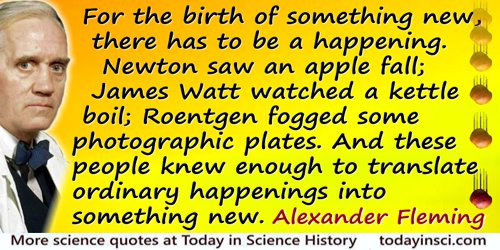 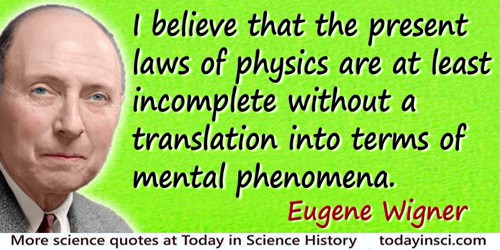 I believe that the present laws of physics are at least incomplete without a translation into terms of mental phenomena.

I learned what research was all about as a research student [with] Stoppani ... Max Perutz, and ... Fred Sanger... From them, I always received an unspoken message which in my imagination I translated as â€śDo good experiments, and donâ€™t worry about the rest.â€ť

If we consider what science already has enabled men to know—the immensity of space, the fantastic philosophy of the stars, the infinite smallness of the composition of atoms, the macrocosm whereby we succeed only in creating outlines and translating a measure into numbers without our minds being able to form any concrete idea of it—we remain astounded by the enormous machinery of the universe.

Imaginary numbers are a fine and wonderful refuge of the divine spirit almost an amphibian between being and non-being. (1702)
[Alternate translation:] The Divine Spirit found a sublime outlet in that wonder of analysis, that portent of the ideal world, that amphibian between being and not-being, which we call the imaginary root of negative unity.

Quoted in FĂ©lix Klein, Elementary Mathematics From an Advanced Standpoint: Arithmetic, Algebra, Analysis (1924), 56. Alternate translation as quoted in Tobias Dantzig, Number, the Language of Science: a Critical Survey Written for the Cultured Non-Mathematician (1930), 204

Although often seen, these are (almost certainly) not Kantâ€™s own words. While explaining Kantâ€™s ideas, this are the words used by Will Durant in 'Kant and German Idealism: Transcendental Analytic', The Story of Philosophy (1924, 1938), 295-296. The first sentence, â€śScience is organized knowledge,â€ť was first stated by Herbert Spencer in 1854 (see Science Quotes by Herbert Spencer.) On the webside of quoteinvestigator.com, which pinpoints Durant as the origin of the quote, it is further explained that Kantâ€™s writing style used complicated expression that makes it rare to find intelligible direct quotes of Kantâ€™s own words.

Scientists are not robotic inducing machines that infer structures of explanation only from regularities observed in natural phenomena (assuming, as I doubt, that such a style of reasoning could ever achieve success in principle). Scientists are human beings, immersed in culture, and struggling with all the curious tools of inference that mind permits ... Culture can potentiate as well as constrainâ€“as Darwinâ€™s translation of Adam Smithâ€™s laissez-faire economic models into biology as the theory of natural selection. In any case, objective minds do not exist outside culture, so we must make the best of our ineluctable embedding.

The dolphin ... [in air] ... has a voice (and can therefore utter vocal or vowel sounds), for it is furnished with a lung and a windpipe; but its tongue is not loose, nor has it lips, so as to give utterance to an articulate sound (or a sound of vowel and consonant in combination.)
Other translations vary. Sometimes seen quoted more briefly as: The voice of the dolphin in air is like that of the human in that they can pronounce vowels and combinations of vowels, but have difficulties with the consonants.

The laws of light and of heat translate each other;—so do the laws of sound and colour; and so galvanism, electricity and magnetism are varied forms of this selfsame energy.

The original Greek is of great use in elucidating Browningâ€™s translation of Agamemnon.

As quoted, without citation, in William Reville, 'The Science of Writing a Good Joke', The Irish Times (5 Jun 2000). Webmaster has not yet found a primary source. Can you help?

What distinguishes the straight line and circle more than anything else, and properly separates them for the purpose of elementary geometry? Their self-similarity. Every inch of a straight line coincides with every other inch, and of a circle with every other of the same circle. Where, then, did Euclid fail? In not introducing the third curve, which has the same propertyâ€”the screw. The right line, the circle, the screwâ€”the representations of translation, rotation, and the two combinedâ€”ought to have been the instruments of geometry. With a screw we should never have heard of the impossibility of trisecting an angle, squaring the circle, etc.

You may translate books of science exactly. ... The beauties of poetry cannot be preserved in any language except that in which it was originally written.