A great surgeon performs operations for stone by a single method; later he makes a statistical summary of deaths and recoveries, and he concludes from these statistics that the mortality law for this operation is two out of five. Well, I say that this ratio means literally nothing scientifically and gives us no certainty in performing the next operation; for we do not know whether the next case will be among the recoveries or the deaths. What really should be done, instead of gathering facts empirically, is to study them more accurately, each in its special determinism. We must study cases of death with great care and try to discover in them the cause of mortal accidents so as to master the cause and avoid the accidents.

From An Introduction to the Study of Experimental Medicine (1865), as translated by Henry Copley Greene (1957), 137-138. (Note that Bernard overlooks how the statistical method can be useful: a surgeon announcing a mortality rate of 40% invites comparison. A surgeon with worse outcomes should adopt this method. If a surgeon has a better results, that method should be adopted.)

These are not the exact words of Roger Bacon, but are from an editor's sub-heading, giving a summary for the topic of Chapter 2, for example, in Roger Bacon and Robert Belle Burke (ed.), Opus Maius (reproduction 2002), Vol. 1, Part 4, 117. Part 4 is devoted to a discourse on Mathematics. In its Chapter 1, as translated, Bacon states that 'There are four great sciences, without which the other sciences cannot be known nor a knowledge of things secured. ... Of these sciences the gate and key is mathematics.'

Anaximander son of Praxiades, of Miletus: he said that the principle and element is the Indefinite, not distinguishing air or water or anything else.  he was the first to discover a gnomon, and he set one up on the Sundials (?) in Sparta, according to Favorinus in his Universal History, to mark solstices and equinoxes; and he also constructed hour indicators. He was the first to draw an outline of earth and sea, but also constructed a [celestial] globe. Of his opinions he made a summary exposition, which I suppose Apollodorus the Athenian also encountered. Apollodorus says in his Chronicles that Anaximander was sixty-four years old in the year of the fifty-eighth Olympiad [547/6 B.C.], and that he died shortly afterwards (having been near his prime approximately during the time of Polycrates, tyrant of Samos).

Diogenes Laërtius II, 1-2. In G.S. Kirk, J.E. Raven and M. Schofield (eds), The Presocratic Philosophers: A Critical History with a Selection of Texts (1957), 99. The editors of this translation note that Anaximander may have introduced the gnomon into Greece, but he did not discover itthe Babylonians used it earlier, and the celestial sphere, and the twelve parts of the day. 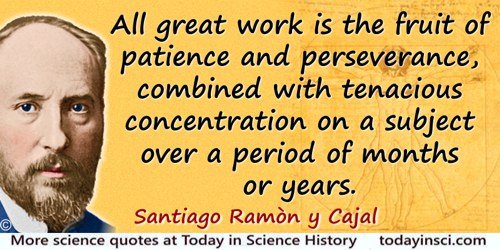 In summary, all great work is the fruit of patience and perseverance, combined with tenacious concentration on a subject over a period of months or years.

In summary, very large populations may differentiate rapidly, but their sustained evolution will be at moderate or slow rates and will be mainly adaptive. Populations of intermediate size provide the best conditions for sustained progressive and branching evolution, adaptive in its main lines, but accompanied by inadaptive fluctuations, especially in characters of little selective importance. Small populations will be virtually incapable of differentiation or branching and will often be dominated by random inadaptive trends and peculiarly liable to extinction, but will be capable of the most rapid evolution as long as this is not cut short by extinction.

Bacon's original text is in Latin, so any quote seen in English is an interpretation by the translator. The dictum, expressed in three words as 'Knowledge is Power,' is only seen in notes to the texts made by translators or editors, and is not a direct translation of Bacon's written words. See, for example, the commentary by F. G. Selby (ed.) in The Advancement of Learning, Book 1, by Francis Bacon (1905), 140; or, the introductory notes by E. A. Abbott (ed.) in Bacon's Essays (1876), cxxxvii. For the best match in Bacon's original words, see Novum Organum Aphorism 3: Scientia et potentia humana in idem coincidunt,... or 'Human knowledge and human power meet in one;...'. The Latin form is in Thomas Fowler (ed.), Bacon's Novum Organum (2nd Ed., 1878), 188; and this translated form is in Francis Bacon and James Spedding (trans.), The Works of Francis Bacon (1864), Vol. 8, 67.

Science is organized knowledge. Wisdom is organized life.
[Author Will Durants summary of Kants ideas; not a direct translation of Kants own words.]

Although often seen, these are (almost certainly) not Kants own words. While explaining Kants ideas, this are the words used by Will Durant in 'Kant and German Idealism: Transcendental Analytic', The Story of Philosophy (1924, 1938), 295-296. The first sentence, Science is organized knowledge, was first stated by Herbert Spencer in 1854 (see Science Quotes by Herbert Spencer.) On the webside of quoteinvestigator.com, which pinpoints Durant as the origin of the quote, it is further explained that Kants writing style used complicated expression that makes it rare to find intelligible direct quotes of Kants own words.

Secondly, the study of mathematics would show them the necessity there is in reasoning, to separate all the distinct ideas, and to see the habitudes that all those concerned in the present inquiry have to one another, and to lay by those which relate not to the proposition in hand, and wholly to leave them out of the reckoning. This is that which, in other respects besides quantity is absolutely requisite to just reasoning, though in them it is not so easily observed and so carefully practised. In those parts of knowledge where it is thought demonstration has nothing to do, men reason as it were in a lump; and if upon a summary and confused view, or upon a partial consideration, they can raise the appearance of a probability, they usually rest content; especially if it be in a dispute where every little straw is laid hold on, and everything that can but be drawn in any way to give color to the argument is advanced with ostentation. But that mind is not in a posture to find truth that does not distinctly take all the parts asunder, and, omitting what is not at all to the point, draws a conclusion from the result of all the particulars which in any way influence it.

In Conduct of the Understanding, Sect. 7.

The experimental investigation by which Ampere established the law of the mechanical action between electric currents is one of the most brilliant achievements in science. The whole theory and experiment, seems as if it had leaped, full grown and full armed, from the brain of the 'Newton of Electricity'. It is perfect in form, and unassailable in accuracy, and it is summed up in a formula from which all the phenomena may be deduced, and which must always remain the cardinal formula of electro-dynamics. 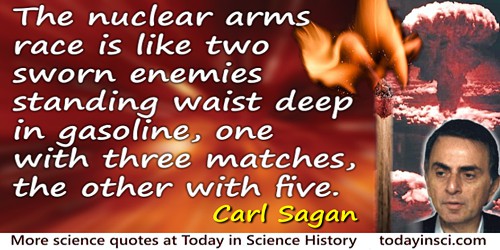 The nuclear arms race is like two sworn enemies standing waist deep in gasoline, one with three matches, the other with five.
[A summary version; not verbatim.]

A summary version, as written by Kristen Ghodsee in Lost in Transition: Ethnographies of Everyday Life After Communism (2011), 2-3. Note the author states it as I remember, and the wording is not verbatim from Sagan's original remark made during a panel discussion in ABC News Viewpoint following the TV movie The Day After (20 Nov 1983). The verbatim quote is also on this page. It begins, Imagine a room

These motions were such as to satisfy me, after frequently repeated observation, that they arose neither from currents in the fluid, nor from its gradual evaporation, but belonged to the particle itself.
Summary of Brownian motion.

A Brief Account of Microscopical Observations made in the Middle of June, July, and August, 1827, on the Particles Contained in the Pollen of Plants', Philosophical Magazine, 1828, NS 4, 162-3.