Cauchy is mad, and there is no way of being on good terms with him, although at present he is the only man who knows how mathematics should be treated. What he does is excellent, but very confusedâ€¦

I have always assumed, and I now assume, that he [Robert Oppenheimer] is loyal to the United States. I believe this, and I shall believe it until I see very conclusive proof to the opposite. â€¦ [But] I thoroughly disagreed with him in numerous issues and his actions frankly appeared to me confused and complicated. To this extent I feel that I would like to see the vital interests of this country in hands which I understand better, and therefore trust more.

After Teller paid tribute to Oppenheimerâ€™s talents, especially his â€śvery outstanding achievementâ€ť as the wartime organizer and director of Los Alamos, Teller continued his testimony to the Gray board hearings (28 Apr 1954) in the Atomic Energy Commission building, â€śIn the Matter of J. Robert Oppenheimer.â€ť The subject quotes were excerpted from Tellerâ€™s answers to their questions. As given in Robert Coughlan, 'Dr. Edward Tellerâ€™s Magnificent Obsession', Life (6 Sep 1954), 72-74.

I â€¦ was therefore enforced, as a bear doth her whelps, to bring forth this confused lump; I had not time to lick it into form, as she doth her young ones, but even so to publish it.

Its [mathematical analysis] chief attribute is clearness; it has no means for expressing confused ideas. It compares the most diverse phenomena and discovers the secret analogies which unite them. If matter escapes us, as that of air and light because of its extreme tenuity, if bodies are placed far from us in the immensity of space, if man wishes to know the aspect of the heavens at successive periods separated by many centuries, if gravity and heat act in the interior of the solid earth at depths which will forever be inaccessible, mathematical analysis is still able to trace the laws of these phenomena. It renders them present and measurable, and appears to be the faculty of the human mind destined to supplement the brevity of life and the imperfection of the senses, and what is even more remarkable, it follows the same course in the study of all phenomena; it explains them in the same language, as if in witness to the unity and simplicity of the plan of the universe, and to make more manifest the unchangeable order which presides over all natural causes.

Modern music, headstrong, wayward, tragically confused as to what to say and how to say it, has mounted its horse, as the joke goes, and ridden off in all directions. If we require of an art that it be unified as a whole and expressed in a universal language known to all, if it must be a consistent symbolization of the era, then modern music is a disastrous failure. It has many voices, many symbolizations. It it known to one, unknown to another. But if an art may be as variable and polyvocal as the different individuals and emotional regions from which it comes in this heterogeneous modern world, then the diversity and contradiction of modern music may be acceptable. 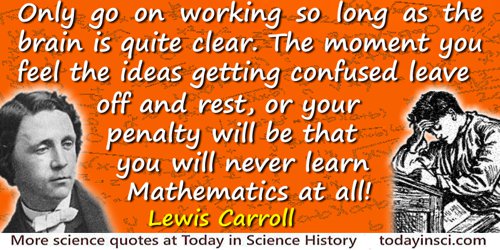 Only go on working so long as the brain is quite clear. The moment you feel the ideas getting confused leave off and rest, or your penalty will be that you will never learn Mathematics at all!

From letter to Edith Rix with hints for studying (about Mar 1885), in Stuart Dodgson Collingwood, The Life and Letters of Lewis Carroll (1898), 241.

Secondly, the study of mathematics would show them the necessity there is in reasoning, to separate all the distinct ideas, and to see the habitudes that all those concerned in the present inquiry have to one another, and to lay by those which relate not to the proposition in hand, and wholly to leave them out of the reckoning. This is that which, in other respects besides quantity is absolutely requisite to just reasoning, though in them it is not so easily observed and so carefully practised. In those parts of knowledge where it is thought demonstration has nothing to do, men reason as it were in a lump; and if upon a summary and confused view, or upon a partial consideration, they can raise the appearance of a probability, they usually rest content; especially if it be in a dispute where every little straw is laid hold on, and everything that can but be drawn in any way to give color to the argument is advanced with ostentation. But that mind is not in a posture to find truth that does not distinctly take all the parts asunder, and, omitting what is not at all to the point, draws a conclusion from the result of all the particulars which in any way influence it.

In Conduct of the Understanding, Sect. 7.

The genuine spirit of Mathesis is devout. No intellectual pursuit more truly leads to profound impressions of the existence and attributes of a Creator, and to a deep sense of our filial relations to him, than the study of these abstract sciences. Who can understand so well how feeble are our conceptions of Almighty Power, as he who has calculated the attraction of the sun and the planets, and weighed in his balance the irresistible force of the lightning? Who can so well understand how confused is our estimate of the Eternal Wisdom, as he who has traced out the secret laws which guide the hosts of heaven, and combine the atoms on earth? Who can so well understand that man is made in the image of his Creator, as he who has sought to frame new laws and conditions to govern imaginary worlds, and found his own thoughts similar to those on which his Creator has acted?

In 'The Imagination in Mathematics', North American Review, 85, 226.

The positive heuristic of the programme saves the scientist from becoming confused by the ocean of anomalies.

The practices we now call conservation are, to a large extent, local alleviations of biotic pain. They are necessary, but they must not be confused with cures. The art of land doctoring is being practiced with vigor, but the science of land health is yet to be born.

We start off confused and end up confused on a higher level.

What is This Thing Called Science? (1982), Introduction, xix.