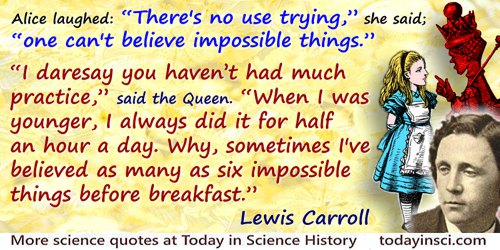 Alice laughed: Theres no use trying, she said; one cant believe impossible things. I daresay you havent had much practice, said the Queen. When I was younger, I always did it for half an hour a day. Why, sometimes Ive believed as many as six impossible things before breakfast.

Biographical history, as taught in our public schools, is still largely a history of boneheads: ridiculous kings and queens, paranoid political leaders, compulsive voyagers, ignorant generalsthe flotsam and jetsam of historical currents. The men who radically altered history, the great creative scientists and mathematicians, are seldom mentioned if at all.

Opening paragraph of book review, 'Adventures Of a Mathematician: The Man Who Invented the H-Bomb', New York Times (9 May 1976), 201.

Chemistry dissolves the goddess in the alembic,
Venus, the white queen, the universal matrix,
Down to the molecular hexagons and carbon-chains.

In Allgemeine Deutsche Biographie (1878, 8, 435. As cited and translated in Robert Édouard Moritz, Memorabilia Mathematica; Or, The Philomaths Quotation-book (1914), 158.

How quickly do we grow accustomed to wonders. I am reminded of the Isaac Asimov story Nightfall, about the planet where the stars were visible only once in a thousand years. So awesome was the sight that it drove men mad. We who can see the stars every night glance up casually at the cosmos and then quickly down again, searching for a Dairy Queen.

Its very good jam, said the Queen.
Well, I dont want any to-day, at any rate.
You couldnt have it if you did want it, the Queen said.
The rule is jam tomorrow and jam yesterday but never jam to-day.
It must come sometimes to jam to-day, Alice objected.
No it cant, said the Queen.
Its jam every other day; to-day isnt any other day, you know.
I dont understand you, said Alice. Its dreadfully confusing.

Mathematics is not arithmetic. Though mathematics may have arisen from the practices of counting and measuring it really deals with logical reasoning in which theoremsgeneral and specific statementscan be deduced from the starting assumptions. It is, perhaps, the purest and most rigorous of intellectual activities, and is often thought of as queen of the sciences.

Mathematics is the queen of the sciences.

The cold chaste Moon, the Queen of Heavens bright isles,
Who makes all beautiful on which she smiles!
That wandering shrine of soft, yet icy flame,
Which ever is transformed yet still the same,
And warms, but not illumines.

The game of chess has always fascinated mathematicians, and there is reason to suppose that the possession of great powers of playing that game is in many features very much like the possession of great mathematical ability. There are the different pieces to learn, the pawns, the knights, the bishops, the castles, and the queen and king. The board possesses certain possible combinations of squares, as in rows, diagonals, etc. The pieces are subject to certain rules by which their motions are governed, and there are other rules governing the players.  One has only to increase the number of pieces, to enlarge the field of the board, and to produce new rules which are to govern either the pieces or the player, to have a pretty good idea of what mathematics consists.

The strongest arguments prove nothing so long as the conclusions are not verified by experience. Experimental science is the queen of sciences and the goal of all speculation.

This shall be the test of innocenceif I can hear a taunt, and look out on this friendly moon, pacing the heavens in queenlike majesty, with the accustomed yearning.

As given, without citation, in Howard W. Eves Mathematical Circles Squared (1972), 158, which attributes it (via Dirk J. Struik) to a memorandum in which Passano wrote of the trend in the Dept. of Mathematics at M.I.T. Webmaster has as yet been unable to identify a primary source. (Can you help?) [Note: quean is an archaic word for: a disreputable woman; specifically : prostitute.Merriam-Webster. Thus the semantic spread between queen and quean could not be greater: from a woman of the highest repute to one of the lowest. alphadictionary.com]

What purpose is effected by a catalogue of undistinguished kings and queens? Tom, Dick, or Harry, they are all dead. General resurrections are failures, and are better postponed.