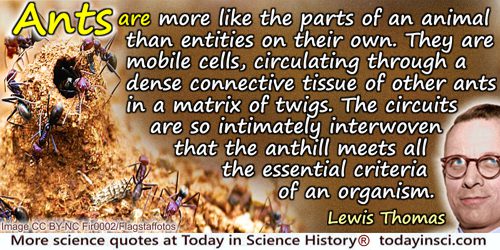 Ants are more like the parts of an animal than entities on their own. They are mobile cells, circulating through a dense connective tissue of other ants in a matrix of twigs. The circuits are so intimately interwoven that the anthill meets all the essential criteria of an organism. 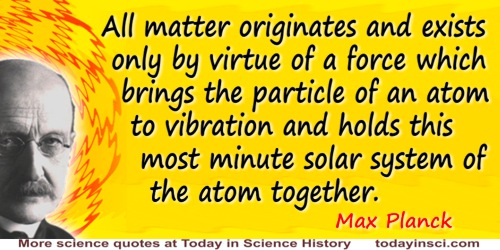 As a man who has devoted his whole life to the most clear headed science, to the study of matter, I can tell you as a result of my research about atoms this much: There is no matter as such. All matter originates and exists only by virtue of a force which brings the particle of an atom to vibration and holds this most minute solar system of the atom together. â€¦ We must assume behind this force the existence of a conscious and intelligent mind. This mind is the matrix of all matter.

Lecture, 'Das Wesen der Materie' [The Essence/Nature/Character of Matter], Florence, Italy (1944). Archiv zur Geschichte der Max-Planck-Gesellschaft, Abt. Va, Rep. 11 Planck, Nr. 1797. Original German and this English translation, as in Gregg Braden, The Spontaneous Healing of Belief: Shattering the Paradigm of False Limits (2009), 334-35. Note: a number of books showing this quote cite it as from Planckâ€™s Nobel Prize acceptance speech (1918), which the Webmaster has checked, and does not see this quote therein. The original German excerpt, and a slightly more complete translation is also on this web page, beginning: â€śAs a physicist who devoted â€¦.â€ť

Chemistry dissolves the goddess in the alembic,
Venus, the white queen, the universal matrix,
Down to the molecular hexagons and carbon-chains.

Communication is the matrix in which all human activities are embedded.

I read somewhere that some people believe that the entire universe is a matrix of living thought. And I said, â€śMan, if thatâ€™s not a definition of God, I donâ€™t know what is.â€ť

As cited in Anthony B. Anderson and Clinton N. Jenkins, Applying Nature's Design: Corridors As A Strategy For Biodiversity Conservation (2006), 1.

Science is, and must be, culturally embedded; what else could the product of human passion be?... Culture is not the enemy of objectivity but a matrix that can either aid or retard advancing knowledge.

That Mettals, Small Stones, Rocky-Stones, Sulphurs, Salts, and so the whole rank of Minerals, do find their Seeds in the Matrix or Womb of the Waters, which contain the Reasons, Gifts, Knowledges, Progresses, Appointments, Offices, and Durations of the same.

The frontiers of science are separated now by long years of study, by specialized vocabularies, arts, techniques, and knowledge from the common heritage even of a most civilized society; and anyone working at the frontier of such science is in that sense a very long way from home, a long way too from the practical arts that were its matrix and origin, as indeed they were of what we today call art.

Address at the close of the year-long Bicentennial Celebration of Columbia University (26 Dec 54). Printed in 'Prospects in the Arts and Sciences', Bulletin of the Atomic Scientists (Feb 1955), 52.

The steady states of the fluid matrix of the body are commonly preserved by physiological reactions, i.e., by more complicated processes than are involved in simple physico-chemical equilibria. Special designations, therefore, are appropriate:â€”â€śhomeostasisâ€ť to designate stability of the organism; â€śhomeostatic conditions,â€ť to indicate details of the stability; and â€śhomeostatic reactions,â€ť to signify means for maintaining stability.

Ultra-modern physicists [are tempted to believe] that Nature in all her infinite variety needs nothing but mathematical clothing [and are] strangely reluctant to contemplate Nature unclad. Clothing she must have. At the least she must wear a matrix, with here and there a tensor to hold the queer garment together.

As quoted by Stephen T. Keith and Pierre QuĂ©dec, in 'Magnetism and Magnetic Materials', an article collected in Out of the Crystal Maze: Chapters from The History of Solid State Physics (1992), 361.

We [Irving Kaplansky and Paul Halmos] share a philosophy about linear algebra: we think basis-free, we write basis-free , but when the chips are down we close the office door and compute with matrices like fury.

[J.J.] Sylvesterâ€™s methods! He had none. â€śThree lectures will be delivered on a New Universal Algebra,â€ť he would say; then, â€śThe course must be extended to twelve.â€ť It did last all the rest of that year. The following year the course was to be Substitutions-ThĂ©orie, by Netto. We all got the text. He lectured about three times, following the text closely and stopping sharp at the end of the hour. Then he began to think about matrices again. â€śI must give one lecture a week on those,â€ť he said. He could not confine himself to the hour, nor to the one lecture a week. Two weeks were passed, and Netto was forgotten entirely and never mentioned again. Statements like the following were not unfrequent in his lectures: â€śI havenâ€™t proved this, but I am as sure as I can be of anything that it must be so. From this it will follow, etc.â€ť At the next lecture it turned out that what he was so sure of was false. Never mind, he kept on forever guessing and trying, and presently a wonderful discovery followed, then another and another. Afterward he would go back and work it all over again, and surprise us with all sorts of side lights. He then made another leap in the dark, more treasures were discovered, and so on forever.