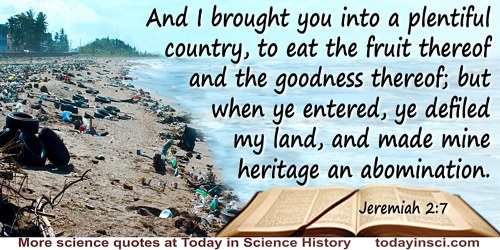 And I brought you into a plentiful country, to eat the fruit thereof and the goodness thereof; but when ye entered, ye defiled my land, and made mine heritage an abomination.

Creation science has not entered the curriculum for a reason so simple and so basic that we often forget to mention it: because it is false, and because good teachers understand why it is false. What could be more destructive of that most fragile yet most precious commodity in our entire intellectual heritage—good teaching—than a bill forcing our honorable teachers to sully their sacred trust by granting equal treatment to a doctrine not only known to be false, but calculated to undermine any general understanding of science as an enterprise?.

Defenders of the short-sighted men who in their greed and selfishness will, if permitted, rob our country of half its charm by their reckless extermination of all useful and beautiful wild things sometimes seek to champion them by saying the the game belongs to the people. So it does; and not merely to the people now alive, but to the unborn people. The greatest good for the greatest number applies to the number within the womb of time, compared to which those now alive form but an insignificant fraction. Our duty to the whole, including the unborn generations, bids us restrain an unprincipled present-day minority from wasting the heritage of these unborn generations. The movement for the conservation of wild life and the larger movement for the conservation of all our natural resources are essentially democratic in spirit, purpose, and method.

Genetics has enticed a great many explorers during the past two decades. They have labored with fruit-flies and guinea-pigs, with sweet peas and corn, with thousands of animals and plants in fact, and they have made heredity no longer a mystery but an exact science to be ranked close behind physics and chemistry in definiteness of conception. One is inclined to believe, however, that the unique magnetic attraction of genetics lies in the vision of potential good which it holds for mankind rather than a circumscribed interest in the hereditary mechanisms of the lowly species used as laboratory material. If man had been found to be sharply demarcated from the rest of the occupants of the world, so that his heritage of physical form, of physiological function, and of mental attributes came about in a superior manner setting him apart as lord of creation, interest in the genetics of the humbler organismsif one admits the truthwould have flagged severely. Biologists would have turned their attention largely to the ways of human heredity, in spite of the fact that the difficulties encountered would have rendered progress slow and uncertain. Since this was not the case, since the laws ruling the inheritance of the denizens of the garden and the inmates of the stable were found to be applicable to prince and potentate as well, one could shut himself up in his laboratory and labor to his heart's content, feeling certain that any truth which it fell to his lot to discover had a real human interest, after all.

Geometry seems to stand for all that is practical, poetry for all that is visionary, but in the kingdom of the imagination you will find them close akin, and they should go together as a precious heritage to every youth.

From The Proceedings of the Michigan Schoolmasters Club, reprinted in School Review (1898), 6 114.

I am by heritage a Jew, by citizenship a Swiss, and by makeup a human being, and only a human being, without any special attachment to any state or national entity whatsoever.

Knowledge is never the exclusive possession of any favoured race; the whole world is inter-dependent and a constant stream of thought had through ages enriched the common heritage of mankind.

Scientific thought is the common heritage of mankind.

The frontiers of science are separated now by long years of study, by specialized vocabularies, arts, techniques, and knowledge from the common heritage even of a most civilized society; and anyone working at the frontier of such science is in that sense a very long way from home, a long way too from the practical arts that were its matrix and origin, as indeed they were of what we today call art.

Address at the close of the year-long Bicentennial Celebration of Columbia University (26 Dec 54). Printed in 'Prospects in the Arts and Sciences', Bulletin of the Atomic Scientists (Feb 1955), 52.

The human soul is like a bird that is born in a cage. Nothing can deprive it of its natural longings, or obliterate the mysterious remembrance of its heritage.

The right that must become paramount is not the right to procreate, but rather the right of every child to be born with a sound physical and mental constitution, based on a sound genotype. No parents will in that future time have the right to burden society with a malformed or mentally incompetent child. Just as every child must have the right to full educational opportunity and a sound nutrition, so every child has the inalienable right to a sound heritage.

Expressing concern that in a coming overpopulated world, sacred rights of man must alter. Presidential Address (28 Dec 1970) to the American Association for the Advancement of Science. 'Science: Endless Horizons or Golden Age?', Science (8 Jan 1971), 171, No. 3866, 24. As quoted in obituary by Douglas Martin, New York Times (20 Jan 2005).

The university is the archive of the Western mind, it's the keeper of the Western culture, ... the guardian of our heritage, the teacher of our teachers, ... the dwelling place of the free mind.

In speech at the fourth bicentennial Conference of Columbia University, quoted in 'Text of Adlai Stevenson's Address at Columbia...', in New York Times (6 Jun 1954), 52.

To present science in purely abstract terms as a collection of information or as a system of knowledge, thereby ignoring the place of science in the drama of human history, is simply to rob the students of their own heritage as human beings and to reduce one of the most exciting chapters in the history of mankind to the bare bones of observed fact and the skeletons of dry theories built of them.

From 'The History of Science and the Teaching of Science', collected in I.B. Cohen and F.G. Watson(eds.), General Education in Science (1952), 72.

We find that one of the most rewarding features of being scientists these days ... is the common bond which the search for truth provides to scholars of many tongues and many heritages. In the long run, that spirit will inevitably have a constructive effect on the benefits which man can derive from knowledge of himself and his environment.

We live an age of science and of abounding accumulation of material things. These did not create the Declaration. Our Declaration created them.  If we are to maintain the great heritage which has been bequeathed to us, we must be like-minded as the fathers who created it.

Address at a Celebration of the 150th Anniversary of the Declaration of Independence, Philadelphia (5 Jul 1926). In William J. Federer, A Treasury of Presidential Quotations (2004), 252.