Felix, qui potuit rerum cognoscere causas.
Blessed is he who has been able to win knowledge of the causes of things.

Where faith commences, science ends. Both these arts of the human mind must be strictly kept apart from each other. Faith has its origin in the poetic imagination; knowledge, on the other hand, originates in the reasoning intelligence of man. Science has to pluck the blessed fruits from the tree of knowledge, unconcerned whether these conquests trench upon the poetical imaginings of faith or not.

Blessed is the man who, having nothing to say, abstains from giving in words evidence of the fact. 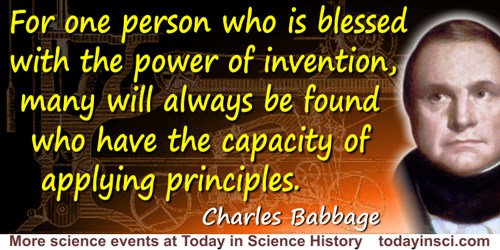 For one person who is blessed with the power of invention, many will always be found who have the capacity of applying principles.

Reflections on the Decline of Science in England and on Some of its Causes (1830), 18.

If experiments are performed thousands of times at all seasons and in every place without once producing the effects mentioned by your philosophers, poets, and historians, this will mean nothing and we must believe their words rather our own eyes? But what if I find for you a state of the air that has all the conditions you say are required, and still the egg is not cooked nor the lead ball destroyed? Alas! I should be wasting my efforts... for all too prudently you have secured your position by saying that 'there is needed for this effect violent motion, a great quantity of exhalations, a highly attenuated material and whatever else conduces to it.' This 'whatever else' is what beats me, and gives you a blessed harbor, a sanctuary completely secure.

It is fashionable nowadays to talk about the endless riches of the sea. The ocean is regarded as a sort of bargain basement, but I donâ€™t agree with that estimate. People donâ€™t realize that water in the liquid state is very rare in the universe. Away from earth it is usually a gas. This moisture is a blessed treasure, and it is our basic duty, if we donâ€™t want to commit suicide, to preserve it.

LOGIC, n. The art of thinking and reasoning in strict accordance with the limitations and incapacities of the human misunderstanding. The basic of logic is the syllogism, consisting of a major and a minor premise and a conclusionâ€”thus:
Major Premise: Sixty men can do a piece of work sixty times as quickly as one man.
Minor Premise: One man can dig a post-hole in sixty seconds; thereforeâ€”
Conclusion: Sixty men can dig a post-hole in one second.
This may be called the syllogism arithmetical, in which, by combining logic and mathematics, we obtain a double certainty and are twice blessed.

Next to the word 'Nature,' 'the Great Chain of Being' was the sacred phrase of the eighteenth century, playing a part somewhat analogous to that of the blessed word 'evolution' in the late nineteenth.

The steam-engine in its manifold applications, the crime-decreasing gas-lamp, the lightning conductor, the electric telegraph, the law of storms and rules for the mariner's guidance in them, the power of rendering surgical operations painless, the measures for preserving public health, and for preventing or mitigating epidemics,â€”such are among the more important practical results of pure scientific research, with which mankind have been blessed and States enriched.

This sceptred isle,â€¦
This fortress built by Nature for herselfâ€¦
This precious stone set in the silver sea,
Which serves it in the office of a wall
Or as a moat defensive to a house,
Against the envy of less happier lands,
This blessed plot, this earth, this realm, this England.

Thou hast nor youth nor age,
But as it were an after-dinner's sleep
Dreaming on both; for all thy blessed youth
Becomes as aged, and doth beg the alms
Of palsied eld.

To Archimedes once came a youth intent upon knowledge.
Said he â€śInitiate me into the Science divine,
Which to our country has borne glorious fruits in abundance,
And which the walls of the town â€™gainst the Sambuca protects.â€ť
â€śCallst thou the science divine? It is so,â€ť the wise man responded;
â€śBut so it was, my son, ere the state by her service was blest.
Wouldâ€™st thou have fruit of her only? Mortals with that can provide thee,
He who the goddess would woo, seek not the woman in her.â€ť

What a type of happy family is the family of the Sun! With what order, with what harmony, with what blessed peace, do his children the planets move around him, shining with light which they drink in from their parentâ€™s in at once upon him and on one another!

Words were originally magic, and the word retains much of its old magical power even to-day, With words one man can make another blessed, or drive him to despair;â€¦ Words call forth effects and are the universal means of influencing human beings. Therefore let us not underestimate the use of words in psychotherapy.

From a series of 28 lectures for laymen, Part One, 'The Psychology of Errors'. Lecture 1, 'Introduction' collected in Sigmund Freud and G. Stanley Hall (trans.), A General Introduction to Psychoanalysis (1920), 3.

[The sun] â€¦ which alone we should judge to be worthy of the most high God, if He should be pleased with a material domicile, and choose a place in which to dwell with the blessed angels.