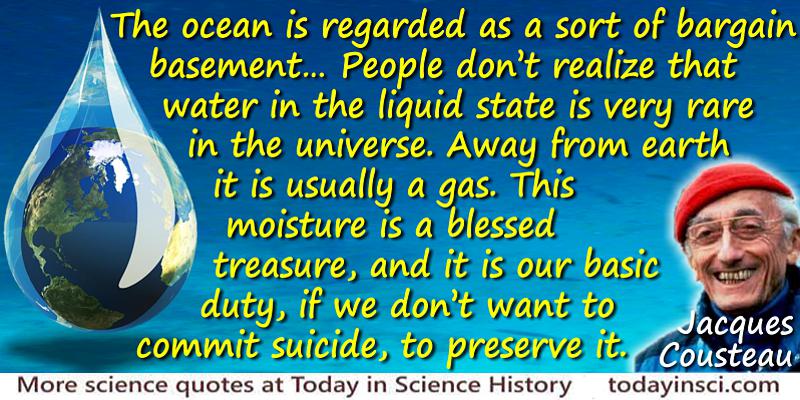 “People don’t realize that water in the liquid state is very rare in the universe. … This moisture is a blessed treasure…”
— Jacques-Yves Cousteau
New York Times (25 Oct 1970).

This quotes comes from a New York Times article on the occasion of the award of a medal to Jacques Cousteau by the Franklin Institute in recognition of his four decades of contributions to marine biology and oceanography. The article reported Cousteau’s fascination with the ocean life and his philosophy. He expressed his concern about the sea and its future, with this quote concluding the article:

“It is fashionable nowadays to talk about the endless riches of the sea. The ocean is regarded as a sort of bargain basement, but I don’t agree with that estimate. People don’t realize that water in the liquid State is very rare in the universe. Away from earth it is usually a gas. This moisture is a blessed treasure, and it is our basic duty, if we don’t want to commit suicide, to preserve it.”


Text by Webmaster, with quote reported by Nancy Hicks in 'Cousteaus Philosophy of the Sea Helps Him Get Another Medal', New York Times (25 Oct 1970), 54.