Jacques-Yves Cousteau
“Enraptured by the atmosphere of a wreck” 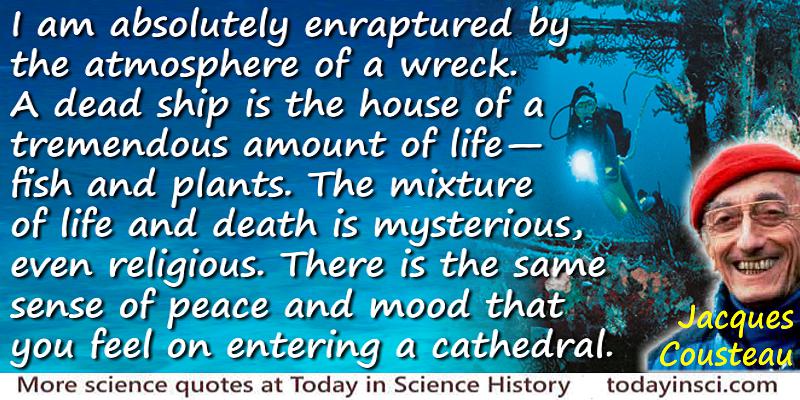 “I am absolutely enraptured by the atmosphere of a wreck. A dead ship is the house of a tremendous amount of life—fish and plants.”
— Jacques-Yves Cousteau
Quoted in Time (1960).

The article, titled “Poet of the Depths,” included this quote:

“I am absolutely enraptured by the atmosphere of a wreck. A dead ship is the house of a tremendous amount of life—fish and plants. The mixture of life and death is mysterious, even religious. There is the same sense of peace and mood that you feel on entering a cathedral.”

One of the shipwrecks Cousteau had located and explored was the wreck of the Britannic. It was a luxury liner, built as a sister ship to the Titanic, but converted as a British hospital ship. Within a year of its launch, the Britannic was sunk by enemy action on 21 Nov 1916 during World War I in the Aegean Sea off Greece. There was an explosion—but had it been mined or torpedoed? Had it been secretly carrying British troops or war supplies? The results of Cousteau's investigation were presented in a documentary, Calypso's Search for the Britannic. The entire hull of the ship was encrusted with life, and teeming with fish that were circulating around and through openings, as the ship had become, in effect, an artificial reef.

When over 300 feet down exploring inside the wreck, with two other divers, penetrating deep into the ship’s entrails he was swimming among hanging wires and broken planks when the camera lights went out (though for only a few seconds of darkness). Cousteau said in the film's narration that the flash of alarm had brought to mind the words of  Paul Valery:

“A man alone is in bad company.”