As knowledge advances, science ceases to scoff at religion; and religion ceases to frown on science. The hour of mockery by the one, and of reproof by the other, is passing away. Henceforth, they will dwell together in unity and goodwill. They will mutually illustrate the wisdom, power, and grace of God. Science will adorn and enrich religion; and religion will ennoble and sanctify science.

Chemistry is not a primitive science like geometry and astronomy; it is constructed from the debris of a previous scientific formation; a formation half chimerical and half positive, itself found on the treasure slowly amassed by the practical discoveries of metallurgy, medicine, industry and domestic economy. It has to do with alchemy, which pretended to enrich its adepts by teaching them to manufacture gold and silver, to shield them from diseases by the preparation of the panacea, and, finally, to obtain for them perfect felicity by identifying them with the soul of the world and the universal spirit.

Energy is the measure of that which passes from one atom to another in the course of their transformations. A unifying power, then, but also, because the atom appears to become enriched or exhausted in the course of the exchange, the expression of structure.

Everywhere science is enriched by unscientific methods and unscientific results, ... the separation of science and non-science is not only artificial but also detrimental to the advancement of knowledge. If we want to understand nature, if we want to master our physical surroundings, then we must use all ideas, all methods, and not just a small selection of them.

Hardly a pure science, history is closer to animal husbandry than it is to mathematics, in that it involves selective breeding. The principal difference between the husbandryman and the historian is that the former breeds sheep or cows or such, and the latter breeds (assumed) facts. The husbandryman uses his skills to enrich the future; the historian uses his to enrich the past. Both are usually up to their ankles in bullshit.

In the year 2000, the solar water heater behind me, which is being dedicated today, will still be here supplying cheap, efficient energy. A generation from now, this solar heater can either be a curiosity, a museum piece, an example of a road not taken, or it can be just a small part of one of the greatest and most exciting adventures ever undertaken by the American people: harnessing the power of the Sun to enrich our lives as we move away from our crippling dependence on foreign oil.
[The next President, Republican Ronald Reagan, removed the solar panels and gutted renewable energy research budgets. The road was not taken, nationally, in the eight years of his presidency. Several of the panels are, indeed, now in museums. Most were bought as government surplus and put to good use on a college roof.]

It feels unacceptable to many people even to think of having a cosmology based on science.  They see fanciful origin stories as spicing up the culture.  Aspects of many origin stories can enrich our understanding of the scientific picture, but they cannot take its place.

As co-author with Nancy Ellen Abrams, in The View from the Center of the Universe: Discovering Our Extraordinary Place in the Cosmos (2006), 85.

It is not the fruits of scientific research that elevate man and enrich his nature but the urge to understand, the intellectual work, creative or receptive.

It seems to me that the physical constitution of the valley, on which I am reporting, must cast doubt in the minds of those who may have accepted the assumptions of any of the geologic systems hitherto proposed; and that those who delight in science would do better to enrich themselves with empirical facts than take upon themselves the burden of defending and applying general hypotheses.

Knowledge is never the exclusive possession of any favoured race; the whole world is inter-dependent and a constant stream of thought had through ages enriched the common heritage of mankind.

Life is girt all round with a zodiac of sciences, the contributions of men who have perished to add their point of light to our sky. ... These road-makers on every hand enrich us. We must extend the area of life and multiply our relations. We are as much gainers by finding a property in the old earth as by acquiring a new planet.

In James Wood, Dictionary of Quotations from Ancient and Modern, English and Foreign Sources (1893), 247:34.

Man now presides
In power, where once he trembled in his weakness;
Science advances with gigantic strides;
But are we aught enriched in love and meekness?

Most of his [Eulers] memoirs are contained in the transactions of the Academy of Sciences at St. Petersburg, and in those of the Academy at Berlin. From 1728 to 1783 a large portion of the Petropolitan transactions were filled by his writings. He had engaged to furnish the Petersburg Academy with memoirs in sufficient number to enrich its acts for twenty yearsa promise more than fulfilled, for down to 1818 [Euler died in 1793] the volumes usually contained one or more papers of his. It has been said that an edition of Eulers complete works would fill 16,000 quarto pages. 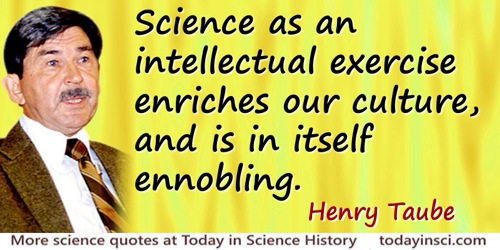 Science as an intellectual exercise enriches our culture, and is in itself ennobling.

Science in England is not a profession: its cultivators are scarcely recognised even as a class. Our language itself contains no single term by which their occupation can be expressed. We borrow a foreign word [Savant] from another country whose high ambition it is to advance science, and whose deeper policy, in accord with more generous feelings, gives to the intellectual labourer reward and honour, in return for services which crown the nation with imperishable renown, and ultimately enrich the human race.

The professor may choose familiar topics as a starting point. The students collect material, work problems, observe regularities, frame hypotheses, discover and prove theorems for themselves.  the student knows what he is doing and where he is going; he is secure in his mastery of the subject, strengthened in confidence of himself. He has had the experience of discovering mathematics. He no longer thinks of mathematics as static dogma learned by rote. He sees mathematics as something growing and developing, mathematical concepts as something continually revised and enriched in the light of new knowledge. The course may have covered a very limited region, but it should leave the student ready to explore further on his own.

The rapid growth of industry, the ever increasing population and the imperative need for more varied, wholesome and nourishing foodstuff makes it all the more necessary to exhaust every means at our command to fill the empty dinner pail, enrich our soils, bring greater wealth and influence to our beautiful South land, which is synonymous to a healthy, happy and contented people.

Letter to Marlin E. Penn (18 Jun 1927), Box 17, George Washington Carver Papers. Cited in Linda O. McMurry, George Washington Carver, Scientist and Symbol (1982), 264-5. Smith's book is about his recollections of G.W. Carver's Sunday School classes at Tuskegee, some 40 years earlier. Webmaster, who has not yet been able to see the original book, cautions this quote may be the gist of Carver's words, rather than an exact quote.

The study of the history of mathematics will not make better mathematicians but gentler ones, it will enrich their minds, mellow their hearts, and bring out their finer qualities.

Those [scientists] who dislike entertaining contradictory thoughts are unlikely to enrich their science with new ideas.

Attributed. (If you know a primary source, please contact webmaster.)

We need science education to produce scientists, but we need it equally to create literacy in the public. Man has a fundamental urge to comprehend the world about him, and science gives today the only world picture which we can consider as valid. It gives an understanding of the inside of the atom and of the whole universe, or the peculiar properties of the chemical substances and of the manner in which genes duplicate in biology. An educated layman can, of course, not contribute to science, but can enjoy and participate in many scientific discoveries which as constantly made. Such participation was quite common in the 19th century, but has unhappily declined. Literacy in science will enrich a persons life.

[Alchemists] enrich the ears of men with vain words, but empty their Pockets of their Money. Whence it appears to be no Art, but a Composition of Trifles, and inventions of mad brains.