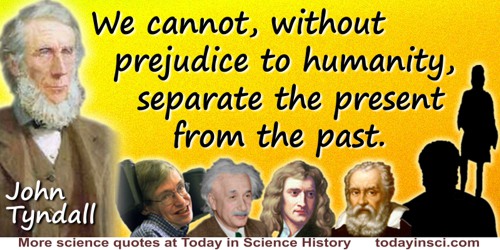 A few days ago, a Master of Arts, who is still a young man, and therefore the recipient of a modern education, stated to me that until he had reached the age of twenty he had never been taught anything whatever regarding natural phenomena, or natural law. Twelve years of his life previously had been spent exclusively amongst the ancients. The case, I regret to say, is typical. Now we cannot, without prejudice to humanity, separate the present from the past.

'On the Study of Physics', From a Lecture delivered in the Royal Institution of Great Britain in the Spring of 1854. Fragments of Science for Unscientific People: A Series of Detached Essays, Lectures, and Reviews (1892), Vol. 1, 284-5.

Archimedes to Eratosthenes greeting.  certain things first became clear to me by a mechanical method, although they had to be demonstrated by geometry afterwards because their investigation by the said method did not furnish an actual demonstration. But it is of course easier, when we have previously acquired by the method, some knowledge of the questions, to supply the proof than it is to find it without any previous knowledge.

Chemistry is not a primitive science like geometry and astronomy; it is constructed from the debris of a previous scientific formation; a formation half chimerical and half positive, itself found on the treasure slowly amassed by the practical discoveries of metallurgy, medicine, industry and domestic economy. It has to do with alchemy, which pretended to enrich its adepts by teaching them to manufacture gold and silver, to shield them from diseases by the preparation of the panacea, and, finally, to obtain for them perfect felicity by identifying them with the soul of the world and the universal spirit.

Even in the dark times between experimental breakthroughs, there always continues a steady evolution of theoretical ideas, leading almost imperceptibly to changes in previous beliefs.

In Nobel Lecture (8 Dec 1989), 'Conceptual Foundations of the Unified Theory of Weak and Electromagnetic Interactions.'

Gauss was not the son of a mathematician; Handels father was a surgeon, of whose musical powers nothing is known; Titian was the son and also the nephew of a lawyer, while he and his brother, Francesco Vecellio, were the first painters in a family which produced a succession of seven other artists with diminishing talents. These facts do not, however, prove that the condition of the nerve-tracts and centres of the brain, which determine the specific talent, appeared for the first time in these men: the appropriate condition surely existed previously in their parents, although it did not achieve expression. They prove, as it seems to me, that a high degree of endowment in a special direction, which we call talent, cannot have arisen from the experience of previous generations, that is, by the exercise of the brain in the same specific direction.

I then began to study arithmetical questions without any great apparent result, and without suspecting that they could have the least connexion with my previous researches. Disgusted at my want of success, I went away to spend a few days at the seaside, and thought of entirely different things. One day, as I was walking on the cliff, the idea came to me, again with the same characteristics of conciseness, suddenness, and immediate certainty, that arithmetical transformations of indefinite ternary quadratic forms are identical with those of non-Euclidian geometry.

In my opinion, there is absolutely no trustworthy proof that talents have been improved by their exercise through the course of a long series of generations. The Bach family shows that musical talent, and the Bernoulli family that mathematical power, can be transmitted from generation to generation, but this teaches us nothing as to the origin of such talents. In both families the high-watermark of talent lies, not at the end of the series of generations, as it should do if the results of practice are transmitted, but in the middle. Again, talents frequently appear in some member of a family which has not been previously distinguished.

In the sphere of natural science let us remember that we have always to deal with an insoluble problem. Let us prove keen and honest in attending to anything which is in any way brought to our notice, most of all when it does not fit in with our previous ideas. For it is only thereby that we perceive the problem, which does indeed lie in nature, but still more in man.

Mathematics is perfectly free in its development and is subject only to the obvious consideration, that its concepts must be free from contradictions in themselves, as well as definitely and orderly related by means of definitions to the previously existing and established concepts. 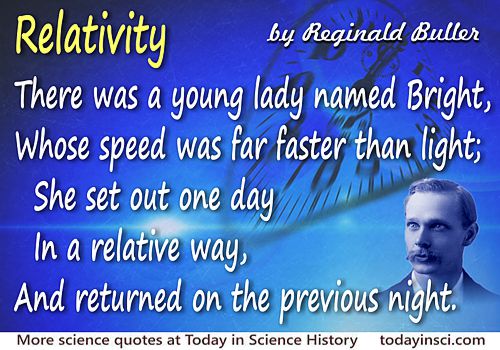 Relativity
There was a young lady named Bright,
Whose speed was far faster than light;
She set out one day
In a relative way,
And returned on the previous night.

We don't know what we are talking about. Many of us believed that string theory was a very dramatic break with our previous notions of quantum theory. But now we learn that string theory, well, is not that much of a break. The state of physics today is like it was when we were mystified by radioactivity. They were missing something absolutely fundamental. We are missing perhaps something as profound as they were back then.

Without the concepts, methods and results found and developed by previous generations right down to Greek antiquity one cannot understand either the aims or achievements of mathematics in the last fifty years.