Human consciousness is just about the last surviving mystery. A mystery is a phenomenon that people don't know how to think aboutyet. There have been other great mysteries: the mystery of the origin of the universe, the mystery of life and reproduction, the mystery of the design to be found in nature, the mysteries of time, space, and gravity. These were not just areas of scientific ignorance, but of utter bafflement and wonder. We do not yet have the final answers to any of the questions of cosmology and particle physics, molecular genetics and evolutionary theory, but we do know how to think about them. The mysteries haven't vanished, but they have been tamed. They no longer overwhelm our efforts to think about the phenomena, because now we know how to tell the misbegotten questions from the right questions, and even if we turn out to be dead wrong about some of the currently accepted answers, we know how to go about looking for better answers. With consciousness, however, we are still in a terrible muddle. Consciousness stands alone today as a topic that often leaves even the most sophisticated thinkers tongue-tied and confused. And, as with all the earlier mysteries, there are many who insistand hopethat there will never be a demystification of consciousness.

I really enjoy good murder mystery writers, usually women, frequently English, because they have a sense of what the human soul is about and why people do dark and terrible things. I also read quite a lot in the area of particle physics and quantum mechanics, because this is theology. This is about the nature of being. This is what life is all about. I try to read as widely as I possibly can.

In the beginning there was an explosion. Not an explosion like those familiar on earth, starting from a definite center and spreading out to engulf more and more of the circumambient air, but an explosion which occurred simultaneously everywhere, filling all space from the beginning, with every particle of matter rushing apart from every other particle. All space in this context may mean either all of an infinite universe, or all of a finite universe which curves back on itself like the surface of a sphere. Neither possibility is easy to comprehend, but this will not get in our way; it matters hardly at all in the early universe whether space is finite or infinite. At about one-hundredth of a second, the earliest time about which we can speak with any confidence, the temperature of the universe was about a hundred thousand million (1011) degrees Centigrade. This is much hotter than in the center of even the hottest star, so hot, in fact, that none of the components of ordinary matter, molecules, or atoms, or even the nuclei of atoms, could have held together. Instead, the matter rushing apart in this explosion consisted of various types of the so-called elementary particles, which are the subject of modern high­energy nuclear physics. 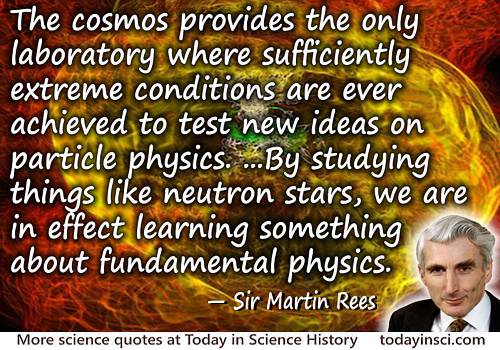 Its becoming clear that in a sense the cosmos provides the only laboratory where sufficiently extreme conditions are ever achieved to test new ideas on particle physics. The energies in the Big Bang were far higher than we can ever achieve on Earth. So by looking at evidence for the Big Bang, and by studying things like neutron stars, we are in effect learning something about fundamental physics.

From editted transcript of BBC Radio 3 interview, collected in Lewis Wolpert and Alison Richards, A Passion For Science (1988), 33.

Particle physics has become the archeology of physics.

In 'What's Wrong With Those Epochs', Physics Today (Nov 1990). Collected in Why Quark Rhymes with Pork: And Other Scientific Diversions (2016), 60.

Tapestries are made by many artisans working together. The contributions of separate workers cannot be discerned in the completed work, and the loose and false threads have been covered over. So it is in our picture of particle physics.

To be a cosmologist, you have to know particle physics.

But in the binary system, Dale points out, handing back the squeezable glass, the alternative to one isnt minus one, its zero. Thats the beauty of it, mechanically. O.K. Gotcha. Youre asking me, Whats this minus one? Ill tell you. Its a plus one moving backward in time. This is all in the space-time foam, inside the Planck duration, dont forget. The dust of points gives birth to time, and time gives birth to the dust of points. Elegant, huh? It has to be. Its blind chance, plus pure math. Theyre proving it, every day. Astronomy, particle physics, its all coming together. Relax into it, young fella. It feels great. Space-time foam.