All fossil anthropoids found hitherto have been known only from mandibular or maxillary fragments, so far as crania are concerned, and so the general appearance of the types they represented had been unknown; consequently, a condition of affairs where virtually the whole face and lower jaw, replete with teeth, together with the major portion of the brain pattern, have been preserved, constitutes a specimen of unusual value in fossil anthropoid discovery. Here, as in Homo rhodesiensis, Southern Africa has provided documents of higher primate evolution that are amongst the most complete extant. Apart from this evidential completeness, the specimen is of importance because it exhibits an extinct race of apes intermediate between living anthropoids and man ... Whether our present fossil is to be correlated with the discoveries made in India is not yet apparent; that question can only be solved by a careful comparison of the permanent molar teeth from both localities. It is obvious, meanwhile, that it represents a fossil group distinctly advanced beyond living anthropoids in those two dominantly human characters of facial and dental recession on one hand, and improved quality of the brain on the other. Unlike Pithecanthropus, it does not represent an ape-like man, a caricature of precocious hominid failure, but a creature well advanced beyond modern anthropoids in just those characters, facial and cerebral, which are to be anticipated in an extinct link between man and his simian ancestor. At the same time, it is equally evident that a creature with anthropoid brain capacity and lacking the distinctive, localised temporal expansions which appear to be concomitant with and necessary to articulate man, is no true man. It is therefore logically regarded as a man-like ape. I propose tentatively, then, that a new family of Homo-simidÃ¦ be created for the reception of the group of individuals which it represents, and that the first known species of the group be designated Australopithecus africanus, in commemoration, first, of the extreme southern and unexpected horizon of its discovery, and secondly, of the continent in which so many new and important discoveries connected with the early history of man have recently been made, thus vindicating the Darwinian claim that Africa would prove to be the cradle of mankind.

I hardly know of a great physical truth whose universal reception has not been preceded by an epoch in which the most estimable persons have maintained that the phenomena investigated were directly dependent on the Divine Will, and that the attempt to investigate them was not only futile but blasphemous. And there is a wonderful tenacity of life about this sort of opposition to physical science. Crushed and maimed in every battle, it yet seems never to be slain; and after a hundred defeats it is at this day as rampant, though happily not so mischievous, as in the time of Galileo.

If we seek for the simplest arrangement, which would enable it [the eye] to receive and discriminate the impressions of the different parts of the spectrum, we may suppose three distinct sensations only to be excited by the rays of the three principal pure colours, falling on any given point of the retina, the red, the green, and the violet; while the rays occupying the intermediate spaces are capable of producing mixed sensations, the yellow those which belong to the red and green, and the blue those which belong to the green and violet.

'Chromatics', in Supplement to the Fourth, Fifth, and Sixth Editions of the Encyclopedia Britannica (1824), Vol. 3, 142.

In general I would be cautious against  plays of fancy and would not make way for their reception into scientific astronomy, which must have quite a different character. Laplaces cosmogenic hypotheses belong in that class. Indeed, I do not deny that I sometimes amuse myself in a similar manner, only I would never publish the stuff. My thoughts about the inhabitants of celestial bodies, for example, belong in that category. For my part, I am (contrary to the usual opinion) convinced  that the larger the cosmic body, the smaller are the inhabitants and other products. For example, on the sun trees, which in the same ratio would be larger than ours, as the sun exceeds the earth in magnitude, would not be able to exist, for on account of the much greater weight on the surface of the sun, all branches would break themselves off, in so far as the materials are not of a sort entirely heterogeneous with those on earth.

In science, address the few; in literature, the many. In science, the few must dictate opinion to the many; in literature, the many, sooner or later, force their judgement on the few. But the few and the many are not necessarily the few and the many of the passing time: for discoverers in science have not un-often, in their own day, had the few against them; and writers the most permanently popular not unfrequently found, in their own day, a frigid reception from the many. By the few, I mean those who must ever remain the few, from whose dieta we, the multitude, take fame upon trust; by the many, I mean those who constitute the multitude in the long-run. We take the fame of a Harvey or a Newton upon trust, from the verdict of the few in successive generations; but the few could never persuade us to take poets and novelists on trust. We, the many, judge for ourselves of Shakespeare and Cervantes.

Inspiration is the inclination of the spirit to the most lively reception of impressions and to the grasping and exposition of ideas.

No true geologist holds by the development hypothesis;it has been resigned to sciolists and smatterers;and there is but one other alternative. They began to be, through the miracle of creation. From the evidence furnished by these rocks we are shut down either to belief in miracle, or to something else infinitely harder of reception, and as thoroughly unsupported by testimony as it is contrary to experience. Hume is at length answered by the severe truths of the stony science. 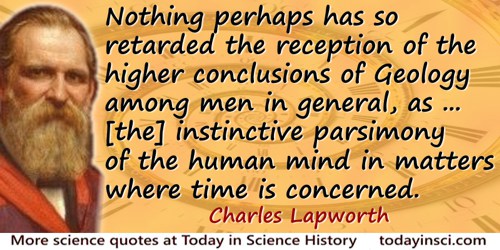 Nothing perhaps has so retarded the reception of the higher conclusions of Geology among men in general, as ... [the] instinctive parsimony of the human mind in matters where time is concerned.

The result of teaching small parts of a large number of subjects is the passive reception of disconnected ideas, not illuminated with any spark of vitality. Let the main ideas which are introduced into a childs education be few and important, and let them be thrown into every combination possible.

In The Organisation of Thought: Educational and Scientific (1917), 5.

Unconscious, perhaps, of the remote tendency of his own labours, he [Joseph Black] undermined that doctrine of material heat, which he seemed to support. For, by his advocacy of latent heat, he taught that its movements constantly battle, not only some of our senses, but all of them; and that, while our feelings make us believe that heat is lost, our intellect makes us believe that it is not lost. Here, we have apparent destructability, and real indestructibility. To assert that a body received heat without its temperature rising, was to make the understanding correct the touch, and defy its dictates. It was a bold and beautiful paradox, which required courage as well as insight to broach, and the reception of which marks an epoch in the human mind, because it was an immense step towards idealizing matter into force.

When [Erwin Schrödinger] went to the Solvay conferences in Brussels, he would walk from the station to the hotel where the delegates stayed, carrying all his luggage in a rucksack and looking so like a tramp that it needed a great deal of argument at the reception desk before he could claim a room.

[Geology] may be looked upon as the history of the earths changes during preparation for the reception of organized beings, a history, which has all the character of a great epic.