A drop of old tuberculin, which is an extract of tubercle bacilli, is put on the skin and then a small superficial scarification is made by turning, with some pressure, a vaccination lancet on the surface of the skin. The next day only those individuals show an inflammatory reaction at the point of vaccination who have already been infected with tuberculosis, whereas the healthy individuals show no reaction at all. Every time we find a positive reaction, we can say with certainty that the child is tuberculous.

A superficial knowledge of mathematics may lead to the belief that this subject can be taught incidentally, and that exercises akin to counting the petals of flowers or the legs of a grasshopper are mathematical. Such work ignores the fundamental idea out of which quantitative reasoning growsthe equality of magnitudes. It leaves the pupil unaware of that relativity which is the essence of mathematical science. Numerical statements are frequently required in the study of natural history, but to repeat these as a drill upon numbers will scarcely lend charm to these studies, and certainly will not result in mathematical knowledge.

It is now necessary to indicate more definitely the reason why mathematics not only carries conviction in itself, but also transmits conviction to the objects to which it is applied. The reason is found, first of all, in the perfect precision with which the elementary mathematical concepts are determined; in this respect each science must look to its own salvation .... But this is not all. As soon as human thought attempts long chains of conclusions, or difficult matters generally, there arises not only the danger of error but also the suspicion of error, because since all details cannot be surveyed with clearness at the same instant one must in the end be satisfied with a belief that nothing has been overlooked from the beginning. Every one knows how much this is the case even in arithmetic, the most elementary use of mathematics. No one would imagine that the higher parts of mathematics fare better in this respect; on the contrary, in more complicated conclusions the uncertainty and suspicion of hidden errors increases in rapid progression. How does mathematics manage to rid itself of this inconvenience which attaches to it in the highest degree? By making proofs more rigorous? By giving new rules according to which the old rules shall be applied? Not in the least. A very great uncertainty continues to attach to the result of each single computation. But there are checks. In the realm of mathematics each point may be reached by a hundred different ways; and if each of a hundred ways leads to the same point, one may be sure that the right point has been reached. A calculation without a check is as good as none. Just so it is with every isolated proof in any speculative science whatever; the proof may be ever so ingenious, and ever so perfectly true and correct, it will still fail to convince permanently. He will therefore be much deceived, who, in metaphysics, or in psychology which depends on metaphysics, hopes to see his greatest care in the precise determination of the concepts and in the logical conclusions rewarded by conviction, much less by success in transmitting conviction to others. Not only must the conclusions support each other, without coercion or suspicion of subreption, but in all matters originating in experience, or judging concerning experience, the results of speculation must be verified by experience, not only superficially, but in countless special cases.

It would indeed be a great delusion, if we stated that those sports of Nature [we find] enclosed in rocks are there by chance or by some vague creative power. Ah, that would be superficial indeed! In reality, those shells, which once were alive in water and are now dead and decomposed, were made thus by time not Nature; and what we now find as very hard, figured stone, was once soft mud and which received the impression of the shape of a shell, as I have frequently demonstrated. 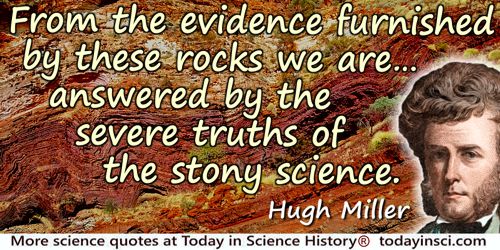 No true geologist holds by the development hypothesis;it has been resigned to sciolists and smatterers;and there is but one other alternative. They began to be, through the miracle of creation. From the evidence furnished by these rocks we are shut down either to belief in miracle, or to something else infinitely harder of reception, and as thoroughly unsupported by testimony as it is contrary to experience. Hume is at length answered by the severe truths of the stony science.

Superficially, it might be said that the function of the kidneys is to make urine; but in a more considered view one can say that the kidneys make the stuff of philosophy itself.

The actual evolution of mathematical theories proceeds by a process of induction strictly analogous to the method of induction employed in building up the physical sciences; observation, comparison, classification, trial, and generalisation are essential in both cases. Not only are special results, obtained independently of one another, frequently seen to be really included in some generalisation, but branches of the subject which have been developed quite independently of one another are sometimes found to have connections which enable them to be synthesised in one single body of doctrine. The essential nature of mathematical thought manifests itself in the discernment of fundamental identity in the mathematical aspects of what are superficially very different domains. A striking example of this species of immanent identity of mathematical form was exhibited by the discovery of that distinguished mathematician  Major MacMahon, that all possible Latin squares are capable of enumeration by the consideration of certain differential operators. Here we have a case in which an enumeration, which appears to be not amenable to direct treatment, can actually be carried out in a simple manner when the underlying identity of the operation is recognised with that involved in certain operations due to differential operators, the calculus of which belongs superficially to a wholly different region of thought from that relating to Latin squares.

The dreadful cocksureness that is characteristic of scientists in bulk is not only quite foreign to the spirit of true science, it is not even justified by a superficial view.

The logic of the subject [algebra], which, both educationally and scientifically speaking, is the most important part of it, is wholly neglected. The whole training consists in example grinding. What should have been merely the help to attain the end has become the end itself. The result is that algebra, as we teach it, is neither an art nor a science, but an ill-digested farrago of rules, whose object is the solution of examination problems.  The result, so far as problems worked in examinations go, is, after all, very miserable, as the reiterated complaints of examiners show; the effect on the examinee is a well-known enervation of mind, an almost incurable superficiality, which might be called Problematic Paralysisa disease which unfits a man to follow an argument extending beyond the length of a printed octavo page.

[The famous attack of Sir William Hamilton on the tendency of mathematical studies] affords the most express evidence of those fatal lacunae in the circle of his knowledge, which unfitted him for taking a comprehensive or even an accurate view of the processes of the human mind in the establishment of truth. If there is any pre-requisite which all must see to be indispensable in one who attempts to give laws to the human intellect, it is a thorough acquaintance with the modes by which human intellect has proceeded, in the case where, by universal acknowledgment, grounded on subsequent direct verification, it has succeeded in ascertaining the greatest number of important and recondite truths. This requisite Sir W. Hamilton had not, in any tolerable degree, fulfilled. Even of pure mathematics he apparently knew little but the rudiments. Of mathematics as applied to investigating the laws of physical nature; of the mode in which the properties of number, extension, and figure, are made instrumental to the ascertainment of truths other than arithmetical or geometricalit is too much to say that he had even a superficial knowledge: there is not a line in his works which shows him to have had any knowledge at all.