An idea must not be condemned for being a little shy and incoherent; all new ideas are shy when introduced first among our old ones. We should have patience and see whether the incoherency is likely to wear off or to wear on, in which latter case the sooner we get rid of them the better.

Facts were never pleasing to him. He acquired them with reluctance and got rid of them with relief. He was never on terms with them until he had stood them on their heads.

Get rid of every pound of material you can do without; put to yourself the question, What business has this to be there?

It is now necessary to indicate more definitely the reason why mathematics not only carries conviction in itself, but also transmits conviction to the objects to which it is applied. The reason is found, first of all, in the perfect precision with which the elementary mathematical concepts are determined; in this respect each science must look to its own salvation .... But this is not all. As soon as human thought attempts long chains of conclusions, or difficult matters generally, there arises not only the danger of error but also the suspicion of error, because since all details cannot be surveyed with clearness at the same instant one must in the end be satisfied with a belief that nothing has been overlooked from the beginning. Every one knows how much this is the case even in arithmetic, the most elementary use of mathematics. No one would imagine that the higher parts of mathematics fare better in this respect; on the contrary, in more complicated conclusions the uncertainty and suspicion of hidden errors increases in rapid progression. How does mathematics manage to rid itself of this inconvenience which attaches to it in the highest degree? By making proofs more rigorous? By giving new rules according to which the old rules shall be applied? Not in the least. A very great uncertainty continues to attach to the result of each single computation. But there are checks. In the realm of mathematics each point may be reached by a hundred different ways; and if each of a hundred ways leads to the same point, one may be sure that the right point has been reached. A calculation without a check is as good as none. Just so it is with every isolated proof in any speculative science whatever; the proof may be ever so ingenious, and ever so perfectly true and correct, it will still fail to convince permanently. He will therefore be much deceived, who, in metaphysics, or in psychology which depends on metaphysics, hopes to see his greatest care in the precise determination of the concepts and in the logical conclusions rewarded by conviction, much less by success in transmitting conviction to others. Not only must the conclusions support each other, without coercion or suspicion of subreption, but in all matters originating in experience, or judging concerning experience, the results of speculation must be verified by experience, not only superficially, but in countless special cases.

Mathematics will not be properly esteemed in wider circles until more than the a b c of it is taught in the schools, and until the unfortunate impression is gotten rid of that mathematics serves no other purpose in instruction than the formal training of the mind. The aim of mathematics is its content, its form is a secondary consideration and need not necessarily be that historic form which is due to the circumstance that mathematics took permanent shape under the influence of Greek logic.

Most people assume that meditation is all about stopping thoughts, getting rid of emotions, somehow controlling the mind. But actually its  about stepping back, seeing the thought clearly, witnessing it coming and going.

Progress is the process whereby the human race is getting rid of whiskers, the veriform appendix and God. 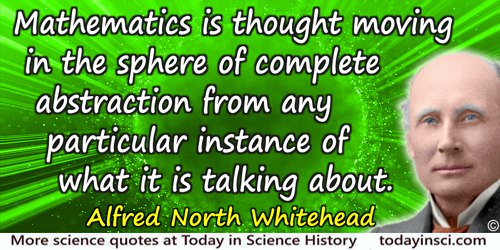 When an hypothesis has come to birth in the mind, or gained footing there, it leads a life so far comparable with the life of an organism, as that it assimilates matter from the outside world only when it is like in kind with it and beneficial; and when contrarily, such matter is not like in kind but hurtful, the hypothesis, equally with the organism, throws it off, or, if forced to take it, gets rid of it again entirely.

When I am violently beset with temptations, or cannot rid myself of evil thoughts, [I resolve] to do some Arithmetic, or Geometry, or some other study, which necessarily engages all my thoughts, and unavoidably keeps them from wandering.

Speaking as president of the Pugwash Conferences. As quoted in Associated Press syndicated to newspapers, for example in, 'Joseph Rotblat, Scientist Against Nuclear Arms, Dies', Sun Journal (2 Sep 2005), A5.