As the skies appear to a man, so is his mind. Some see only clouds there; some, prodigies and portents; some rarely look up at all; their heads, like the brutes, are directed toward Earth. Some behold there serenity, purity, beauty ineffable. The world runs to see the panorama, when there is a panorama in the sky which few go to see. 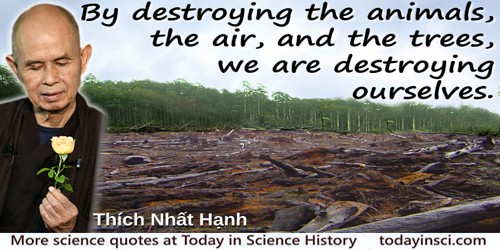 Birds songs express joy, beauty, and purity, and evoke in us vitality and love. So many beings in the universe love us unconditionally. The trees, the water, and the air dont ask anything of us; they just love us. Even though we need this kind of love, we continue to destroy them. By destroying the animals, the air, and the trees, we are destroying ourselves. We must learn to practice unconditional love for all beings so that the animals, the air, the trees, and the minerals can continue to be themselves.

By teaching us how to cultivate each ferment in its purityin other words, by teaching us how to rear the individual organism apart from all others,Pasteur has enabled us to avoid all these errors. And where this isolation of a particular organism has been duly effected it grows and multiplies indefinitely, but no change of it into another organism is ever observed. In Pasteurs researches the Bacterium remained a Bacterium, the Vibrio a Vibrio, the Penicillium a Penicillium, and the Torula a Torula. Sow any of these in a state of purity in an appropriate liquid; you get it, and it alone, in the subsequent crop. In like manner, sow smallpox in the human body, your crop is smallpox. Sow there scarlatina, and your crop is scarlatina. Sow typhoid virus, your crop is typhoidcholera, your crop is cholera. The disease bears as constant a relation to its contagium as the microscopic organisms just enumerated do to their germs, or indeed as a thistle does to its seed.

In 'Fermentation, and its Bearings on Surgery and Medicine', Essays on the Floating­Matter of the Air in Relation to Putrefaction and Infection (1881), 264.

From the aspect of energy, renewed by radio-active phenomena, material corpuscles may now be treated as transient reservoirs of concentrated power. Though never found in a state of purity, but always more or less granulated (even in light) energy nowadays represents for science the most primitive form of universal stuff.

If we range through the whole territory of nature, and endeavour to extract from each department the rich stores of knowledge and pleasure they respectively contain, we shall not find a more refined or purer source of amusement, or a more interesting and unfailing subject for recreation, than that which the observation and examination of the structure, affinities, and habits of plants and vegetables, afford.

In A Practical Treatise on the Cultivation of the Dahlia (1838), 2.

Inexact method of observation, as I believe, is one flaw in clinical pathology to-day. Prematurity of conclusion is another, and in part follows from the first; but in chief part an unusual craving and veneration for hypothesis, which besets the minds of most medical men, is responsible. Except in those sciences which deal with the intangible or with events of long past ages, no treatises are to be found in which hypothesis figures as it does in medical writings. The purity of a science is to be judged by the paucity of its recorded hypotheses. Hypothesis has its right place, it forms a working basis; but it is an acknowledged makeshift, and, at the best, of purpose unaccomplished. Hypothesis is the heart which no man with right purpose wears willingly upon his sleeve. He who vaunts his lady love, ere yet she is won, is apt to display himself as frivolous or his lady a wanton.

The Mechanism and Graphic Registration of the Heart Beat (1920), vii.

Is not light grander than fire? It is the same element in the state of purity.

The feeling of it to my lungs was not sensibly different from that of common air; but I fancied that my breast felt peculiarly light and easy for some time afterwards. Who can tell but that, in time, this pure air may become a fashionable article in luxury. Hitherto only two mice and myself have had the privilege of breathing it.

Those who are finer and nobler are always alone  and necessarily so  and that because of this they can enjoy the purity of their own atmosphere.

Letter (5 Apr 1933). As quoted in Jamie Sayen, Einstein in America: The Scientists Conscience in the Age of Hitler and Hiroshima (1985), 12. This is part of Einsteins reply to a letter from a troubled, unemployed musician, presumably living in Munich.

[In the Royal Society, there] has been, a constant Resolution, to reject all the amplifications, digressions, and swellings of style: to return back to the primitive purity, and shortness, when men deliver'd so many things, almost in an equal number of words. They have exacted from all their members, a close, naked, natural way of speaking; positive expressions; clear senses; a native easiness: bringing all things as near the Mathematical plainness, as they can: and preferring the language of Artizans, Countrymen, and Merchants, before that, of Wits, or Scholars.