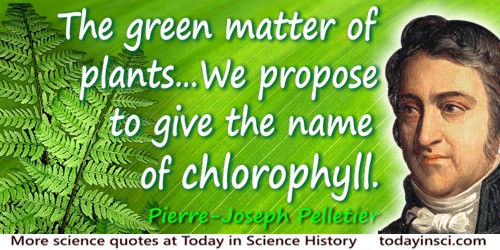 As coauthor with Joseph-Bienaimé Caventou, in 'Sur la Matière verte des Feuilles', Annales de Chimie (1818), 9, 195. Cited in the Oxford English Dictionary as the earliest etymology example given for chlorophyll. Translation by Google.

About 6 or 8 years ago My Ingenious friend Mr John Robinson having [contrived] conceived that a fire engine might be made without a Leverby Inverting the Cylinder & placing it above the mouth of the pit proposed to me to make a model of it which was set about by having never Compleated & I [being] having at that time Ignorant little knoledge of the machine however I always thought the Machine Might be applied to [more] other as valuable purposes [than] as drawing Water.

Entry in notebook (1765). The bracketed words in square brackets were crossed out by Watt. in Eric Robinson and Douglas McKie (eds.), Partners in Science: Letters of James Watt and Joseph Black (1970), 434.

But let your communication be Yea, yea; Nay, nay: for whatsoever is more than these cometh of evil.

Charles Babbage proposed to make an automaton chess-player which should register mechanically the number of games lost and gained in consequence of every sort of move. Thus, the longer the automaton went on playing game, the more experienced it would become by the accumulation of experimental results. Such a machine precisely represents the acquirement of experience by our nervous organization.

Following the original proposal of Belinfante, the writer has in a recent note on the meson theory of nuclear forces used the word nuclon as a common notation for the heavy nuclear constituents, neutrons and protons. In the meantime, however, it has been pointed out to me that, since the root of the word nucleus is nucle, the notation nucleon would from a philological point of view be more appropriate for this purpose.

I love to read the dedications of old books written in monarchiesfor they invariably honor some (usually insignificant) knight or duke with fulsome words of sycophantic insincerity, praising him as the light of the universe (in hopes, no doubt, for a few ducats to support future work); this old practice makes me feel like such an honest and upright man, by comparison, when I put a positive spin, perhaps ever so slightly exaggerated, on a grant proposal.

I must beg leave to propose a separate technical name chromosome for those things which have been called by Boveri chromatic elements, in which there occurs one of the most important acts in karyokinesis, viz. the longitudinal splitting.
[Coining the word chromosome, or chromosom in the original German.]

In my considered opinion the peer review system, in which proposals rather than proposers are reviewed, is the greatest disaster visited upon the scientific community in this century. No group of peers would have approved my building the 72-inch bubble chamber. Even Ernest Lawrence told me he thought I was making a big mistake. He supported me because he knew my track record was good. I believe that U.S. science could recover from the stultifying effects of decades of misguided peer reviewing if we returned to the tried-and-true method of evaluating experimenters rather than experimental proposals. Many people will say that my ideas are elitist, and I certainly agree. The alternative is the egalitarianism that we now practice and Ive seen nearly kill basic science in the USSR and in the People's Republic of China.

In the history of physics, there have been three great revolutions in thought that first seemed absurd yet proved to be true. The first proposed that the earth, instead of being stationary, was moving around at a great and variable speed in a universe that is much bigger than it appears to our immediate perception. That proposal, I believe, was first made by Aristarchos two millenia ago ... Remarkably enough, the name Aristarchos in Greek means best beginning.
[The next two revolutions occurred ... in the early part of the twentieth century: the theory of relativity and the science of quantum mechanics...]

In De Proportionibus Proportionum (1351).[Note: incommensurable, mathematical term refers to numbers in a ratio that cannot be expressed as a ratio of integers.]

Proposals for forming a Public Institution for diffusing the knowledge of Mechanical Inventions, and for teaching, by Philosophical Lectures and Experiments, the application of Science to the common purposes of life.

The Reason of making Experiments is, for the Discovery of the Method of Nature, in its Progress and Operations. Whosoever, therefore doth rightly make Experiments, doth design to enquire into some of these Operations; and, in order thereunto, doth consider what Circumstances and Effects, in the Experiment, will be material and instructive in that Enquiry, whether for the confirming or destroying of any preconceived Notion, or for the Limitation and Bounding thereof, either to this or that Part of the Hypothesis, by allowing a greater Latitude and Extent to one Part, and by diminishing or restraining another Part within narrower Bounds than were at first imagin'd, or hypothetically supposed. The Method therefore of making Experiments by the Royal Society I conceive should be this.
First, To propound the Design and Aim of the Curator in his present Enquiry.
Secondly, To make the Experiment, or Experiments, leisurely, and with Care and Exactness.
Thirdly, To be diligent, accurate, and curious, in taking Notice of, and shewing to the Assembly of Spectators, such Circumstances and Effects therein occurring, as are material, or at least, as he conceives such, in order to his Theory .
Fourthly, After finishing the Experiment, to discourse, argue, defend, and further explain, such Circumstances and Effects in the preceding Experiments, as may seem dubious or difficult: And to propound what new Difficulties and Queries do occur, that require other Trials and Experiments to be made, in order to their clearing and answering: And farther, to raise such Axioms and Propositions, as are thereby plainly demonstrated and proved.
Fifthly, To register the whole Process of the Proposal, Design, Experiment, Success, or Failure; the Objections and Objectors, the Explanation and Explainers, the Proposals and Propounders of new and farther Trials; the Theories and Axioms, and their Authors; and, in a Word the history of every Thing and Person, that is material and circumstantial in the whole Entertainment of the said Society; which shall be prepared and made ready, fairly written in a bound Book, to be read at the Beginning of the Sitting of the Society: The next Day of their Meeting, then to be read over and further discoursed, augmented or diminished, as the Matter shall require, and then to be sign'd by a certain Number of the Persons present, who have been present, and Witnesses of all the said Proceedings, who, by Subscribing their names, will prove undoubted testimony to Posterity of the whole History.

The tendency of the sciences has long been an increasing proclivity of separation and dismemberment  The mathematician turns away from the chemist; the chemist from the naturalist; the mathematician, left to himself divides himself into a pure mathematician and a mixed mathematician, who soon part company  And thus science, even mere physical science, loses all traces of unity. A curious illustration of this result may be observed in the want of any name by which we can designate the students of the knowledge of the material world collectively. We are informed that this difficulty was felt very oppressively by the members of the British Association for the Advancement of Science, at their meetings at York, Oxford and Cambridge, in the last three summers. There was no general term by which these gentlemen could describe themselves with reference to their pursuits  some ingenious gentleman [William Whewell] proposed that, by analogy with artist, they might form Scientist, and added that there could be no scruple  when we have words such as sciolist, economist, and atheistbut this was not generally palatable.

Thus a nerve element, a nerve entity, or neuron, as I propose to call it, consists‥of the following pieces:(a) a nerve cell, (b) the nerve process, (c) its collaterals, and (d) the end-branching.
[Coining the word neuron in the sense of a nerve cell.]

We should like to propose instead that the specificity of DNA self replication is accomplished without recourse to specific protein synthesis and that each of our complementary DNA chains serves as a template or mould for the formation onto itself of a new companion chain.
[Co-author with Francis Crick]

WorldWideWeb: Proposal for a HyperText Project