Anyone who tries to make a distinction between education and entertainment doesnt know the first thing about either.

Art and science coincide insofar as both aim to improve the lives of men and women. The latter normally concerns itself with profit, the former with pleasure. In the coming age, art will fashion our entertainment out of new means of productivity in ways that will simultaneously enhance our profit and maximize our pleasure.

Brechts positive vision of theater in the coming age of technology, expressed in Little Organon for the Theater (1949). In The Columbia World of Quotations (1996).

Even the taking of medicine serves to make time go on with less heaviness. I have a sort of genius for physic and always had great entertainment in observing the changes of the human body and the effects produced by diet, labor, rest, and physical operations.

From an entertainment point of view, the Solar System has been a bust. None of the planets turns out to have any real-estate potential, and most of them are probably even useless for filming Dune sequels. 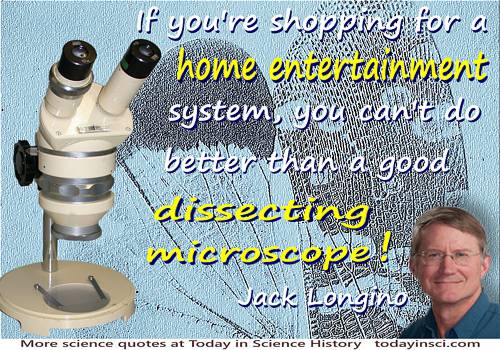 If you're shopping for a home entertainment system you can't do better than a good dissecting microscope.

Its misleading to suppose theres any basic difference between education & entertainment. This distinction merely relieves people of the responsibility of looking into the matter.

Mathematical magic combines the beauty of mathematical structure with the entertainment value of a trick.

In 'Preface', Mathematics, Magic, and Mystery (1956), ix. Webmaster checked the actual page, in the 1956 edition, and there Gardner plainly uses the beginning words Mathematical magic. On page 113, Gardner credits Royal V. Heath for originating the term Mathemagic, used as Heaths book title in 1933. Anywhere you see the quote incorrectly beginning with Mathemagical mathematics or saying Gardner coined the term mathemagical obviously did not check the primary source.

One of the main purposes of scientific inference is to justify beliefs which we entertain already; but as a rule they are justified with a difference. Our pre-scientific general beliefs are hardly ever without exceptions; in science, a law with exceptions can only be tolerated as a makeshift. Scientific laws, when we have reason to think them accurate, are different in form from the common-sense rules which have exceptions: they are always, at least in physics, either differential equations, or statistical averages. It might be thought that a statistical average is not very different from a rule with exceptions, but this would be a mistake. Statistics, ideally, are accurate laws about large groups; they differ from other laws only in being about groups, not about individuals. Statistical laws are inferred by induction from particular statistics, just as other laws are inferred from particular single occurrences.

Our delight in any particular study, art, or science rises and improves in proportion to the application which we bestow upon it. Thus, what was at first an exercise becomes at length an entertainment.

Out of mans mind in free play comes the creation Science. It renews itself, like the generations, thanks to an activity which is the best game of homo ludens: science is in the strictest and best sense a glorious entertainment.

The Mathematics are Friends to Religion, inasmuch as they charm the Passions, restrain the Impetuosity of the Imagination, and purge the Mind from Error and Prejudice. Vice is Error, Confusion, and false Reasoning; and all Truth is more or less opposite to it. Besides, Mathematical Studies may serve for a pleasant Entertainment for those Hours which young Men are apt to throw away upon their Vices; the Delightfulness of them being such as to make Solitude not only easy, but desirable.

The Reason of making Experiments is, for the Discovery of the Method of Nature, in its Progress and Operations. Whosoever, therefore doth rightly make Experiments, doth design to enquire into some of these Operations; and, in order thereunto, doth consider what Circumstances and Effects, in the Experiment, will be material and instructive in that Enquiry, whether for the confirming or destroying of any preconceived Notion, or for the Limitation and Bounding thereof, either to this or that Part of the Hypothesis, by allowing a greater Latitude and Extent to one Part, and by diminishing or restraining another Part within narrower Bounds than were at first imagin'd, or hypothetically supposed. The Method therefore of making Experiments by the Royal Society I conceive should be this.
First, To propound the Design and Aim of the Curator in his present Enquiry.
Secondly, To make the Experiment, or Experiments, leisurely, and with Care and Exactness.
Thirdly, To be diligent, accurate, and curious, in taking Notice of, and shewing to the Assembly of Spectators, such Circumstances and Effects therein occurring, as are material, or at least, as he conceives such, in order to his Theory .
Fourthly, After finishing the Experiment, to discourse, argue, defend, and further explain, such Circumstances and Effects in the preceding Experiments, as may seem dubious or difficult: And to propound what new Difficulties and Queries do occur, that require other Trials and Experiments to be made, in order to their clearing and answering: And farther, to raise such Axioms and Propositions, as are thereby plainly demonstrated and proved.
Fifthly, To register the whole Process of the Proposal, Design, Experiment, Success, or Failure; the Objections and Objectors, the Explanation and Explainers, the Proposals and Propounders of new and farther Trials; the Theories and Axioms, and their Authors; and, in a Word the history of every Thing and Person, that is material and circumstantial in the whole Entertainment of the said Society; which shall be prepared and made ready, fairly written in a bound Book, to be read at the Beginning of the Sitting of the Society: The next Day of their Meeting, then to be read over and further discoursed, augmented or diminished, as the Matter shall require, and then to be sign'd by a certain Number of the Persons present, who have been present, and Witnesses of all the said Proceedings, who, by Subscribing their names, will prove undoubted testimony to Posterity of the whole History.

The success of Apollo was mainly due to the fact that the project was conceived and honestly presented to the public as an international sporting event and not as a contribution to science. The order of priorities in Apollo was accurately reflected by the first item to be unloaded after each landing on the Moon's surface, the television camera. The landing, the coming and going of the astronauts, the exploring of the moon's surface, the gathering of Moon rocks and the earthward departure, all were expertly choreographed with the cameras placed in the right positions to make a dramatic show on television. This was to me the great surprise of the Apollo missions. There was nothing surprising in the fact that astronauts could walk on the Moon and bring home Moon rocks. There were no big scientific surprises in the chemistry of the Moon rocks or in the results of magnetic and seismic observations that the astronauts carried out. The big surprise was the quality of the public entertainment that the missions provided. I had never expected that we would see in real time astronauts hopping around in lunar gravity and driving their Rover down the Lincoln- Lee scarp to claim a lunar speed record of eleven miles per hour. Intensive television coverage was the driving force of Apollo. Von Braun had not imagined the possibilities of television when he decided that one kilohertz would be an adequate communication bandwidth for his Mars Project.

The world is a museum in which all men are destined to be employed and amused, and they cannot be too much interested in the objects around them. Goldsmith the elegant imitator of Buffon, says The mere uninformed spectator passes on in gloomy solitude; while the naturalist in every plant, in every insect, and in every pebble, finds something to entertain his curiosity and excite his speculation.

This speaker reminds me of my childhood in Budapest. There were gypsy magicians who came to town to entertain us children. But as I recollect, there was one important difference: the gypsy only seemed to violate the laws of nature, he never really violated them!

As quoted by William R. Sears in 'Some Recollections of Theodore von Kármán', Address to the Symposium in Memory of Theodore von Kármán, Society for Industrial and Applied Mathematics, National Meeting (13-14 May 1964), Washington, D.C. Printed in Journal of the Society for Industrial and Applied Mathematics (Mar 1965), 13>, No. 1, 178. These are likely not verbatim words of Karman, but as recollected by Sears giving an example of von Kármáns biting anecdotes at public meetings when criticizing a paper he thought really misleading pseudoscience.

We are the inheritors of a great scientific tradition and of a beautiful structure of knowledge. It is the duty of our generation to add to the perfection of this structure and to pass on to the next generation the best traditions of our science for the edification and entertainment of all mankind.

When autumn returns with its long anticipated holidays, and preparations are made for a scamper in some distant locality, hammer and notebook will not occupy much room in the portmanteau, and will certainly be found most entertaining company.