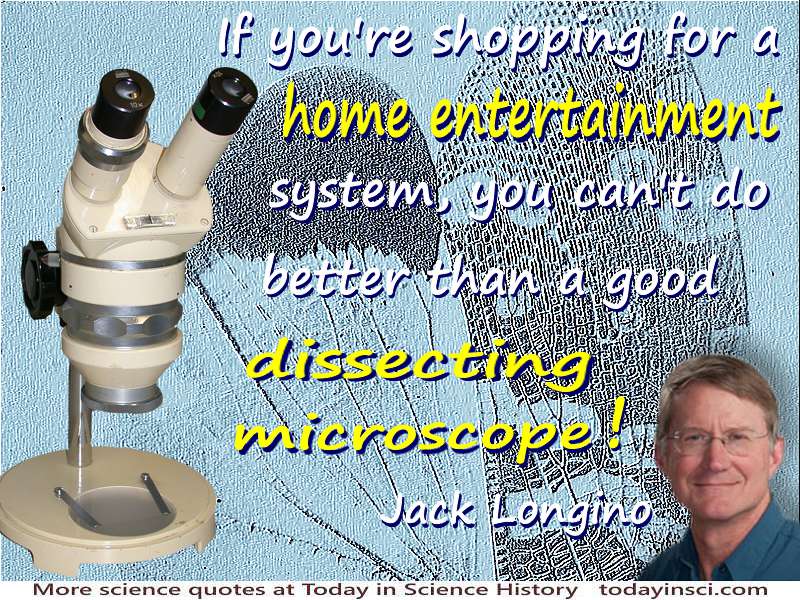 “If you're shopping for a home entertainment system you can't do better than a good dissecting microscope.”
— Jack Longino
From NPR radio interview on Morning Edition, (1 Aug 2013).

In an interview broadcast on National Public Radio's Morning Edition on 1 Aug 2013, Jack Longino was introduced as someone whose childhood hobby of stamp collecting became boring. Instead, Longino said, “If you're shoppong for a home entertainment system, you can't do better than a good dissecting microscope.” So, even in school years, he was putting insects under a dissecting microscope and looking at, for example, amazing jaws:

“With insects, I kept finding things that I could never have imagined. … These strange sideways mandibles with all the teeth on them, and these shield-like faces. These are really scary looking things, and you know, they made me think of Hollywood monsters, the creature in ‘Alien’ and Predator.’”

In his adult life as a biology professor at the University of Utah, Longino has spent more time searching for new such monsters in the leaf litter of Central American rainforests, finding new species, reporting them, and naming them. One of his graduate students, a self-described metal-head, urged him to be creative and name them after demons.

“So Xipacna is one of these Mayan lords of the underworld. And there was this word in the dictionary that was Mabuya that was a demon, so I named one Eurhopalythrix Mabuya, which I think just sounds great.”

Longino is proud to know his work is helping make a snapshot of a world as it is ravaged by human development. His observations, at least, will preserve the knowledge of the variety of even tiny ants for future generations.

As one hears the broadcast, listening to Jack Longino gush about the excitement he finds looking through the dissecting microscope, one can reflect on how the earliest microscopists would have become so enchanted and excited by their work. Since Antonie van Leeuwenhoek drew the animalcules he saw through his early version of a microscope, researchers have continued to find entrancing details revealed that are too small for the human eye to discern.

An aside note: Dr. Longino kindly pointed out a suitable photo of an actual dissecting microscope. The Webmaster had at first found what turned out to be a compound microscope (which uses transmitted light through the slide-mounted sample. A dissecting microscope uses reflected light, and has a platform to work on the sample.) The provided picture, seen above in the illustrated quote, has an interesting story. It replaced a 1976 scope which had for 35 years “served in the humid rain-forest and dusty savannah. Its mechanical parts are still looking very fine, but the optics suffered from heavy fungal infections.” Although of the same age, the replacement WILD M5 scope had “clean optics for very little money.” The website from which it comes also shows Kalip, no doubt thrilled by the new clarity, examining Simulium flies for filarial infections, which cause an infectious tropical disease. The photo above shows the actual dissecting microscope that is now being used to combat riverblindness in Cameroon.

Context by Webmaster with reference to the NPR transcript. (source)