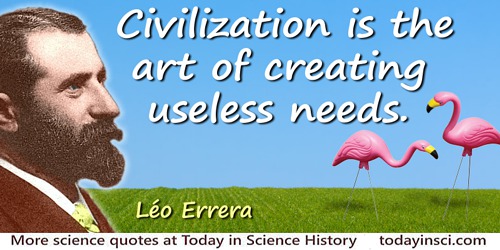 A person by study must try to disengage the subject from useless matter, and to seize on points capable of improvement. ... When subjects are viewed through the mists of prejudice, useful truths may escape.

In An Essay on Aërial Navigation, With Some Observations on Ships (1844), 80.

As useless as a screen door on a submarine.

In use as early as 1963, for example, the boy indulging in horseplay is about as funny as a screen door on a submarine, in publication Safety Education (Jan 1963), 39. Please contact Webmaster if you know the original source.

Computers are useless. They can only give you answers.

This is a commonly seen paraphrase from his comment on mechanical brains. Originally quoted as But they are useless. They can only give you answers, in interview article by William Fifield, 'Pablo Picasso: A Composite Interview', in The Paris Review 32 (Summer-Fall 1964), 62. Describing the interview, Fifield himself set the context as enormous new mechanical brains or calculating machines. (These are now called computers.) Collected in William Fifield, In Search of Genius (1982), 145. As identified on the quoteinvestigator.com website. It is the paraphrase that is now more often seen, in for example, Herman Feshbach, 'Reflections on the Microprocessor Revolution: A Physicists Viewpoint', in Bruce M. Adkins (ed.), Man and Technology (1983), 100.

Every common mechanic has something to say in his craft about good and evil, useful and useless, but these practical considerations never enter into the purview of the mathematician.

From an entertainment point of view, the Solar System has been a bust. None of the planets turns out to have any real-estate potential, and most of them are probably even useless for filming Dune sequels.

Human behaviour reveals uniformities which constitute natural laws. If these uniformities did not exist, then there would be neither social science nor political economy, and even the study of history would largely be useless. In effect, if the future actions of men having nothing in common with their past actions, our knowledge of them, although possibly satisfying our curiosity by way of an interesting story, would be entirely useless to us as a guide in life.

I count Maxwell and Einstein, Eddington and Dirac, among real mathematicians. The great modern achievements of applied mathematics have been in relativity and quantum mechanics, and these subjects are at present at any rate, almost as useless as the theory of numbers.

I happen to be a kind of monkey. I have a monkeylike curiosity that makes me want to feel, smell, and taste things which arouse my curiosity, then to take them apart. It was born in me. Not everybody is like that, but a scientific researchist should be. Any fool can show me an experiment is useless. I want a man who will try it and get something out of it. 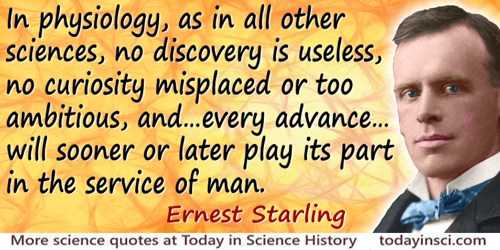 In physiology, as in all other sciences, no discovery is useless, no curiosity misplaced or too ambitious, and we may be certain that every advance achieved in the quest of pure knowledge will sooner or later play its part in the service of man.

My second fixed idea is the uselessness of men above sixty years of age, and the incalculable benefit it would be in commercial, political, and in professional life, if as a matter of course, men stopped work at this age.

In farewell address, Johns Hopkins University, 'The Fixed Period', as quoted in Harvey Cushing, The Life of Sir William Osier (1925), vol. 1, 666. He was reflecting on his own intention to retire (now age 55) because he felt a teacher should have a fixed period of service. The title of his address was from an Anthony Trollope novel The Fixed Period which discussed the retiring of college teachers at age 60.

No anatomist ever discovered a system of organization, calculated to produce pain and disease; or, in explaining the parts of the human body, ever said, this is to irritate; this is to inflame; this duct is to convey the gravel to the kidneys; this gland to secrete the humour which forms the gout: if by chance he come at a part of which he knows not the use, the most he can say is, that it is useless; no one ever suspects that it is put there to incommode, to annoy, or torment.

Occurrences that other men would have noted only with the most casual interest became for Whitney exciting opportunities to experiment. Once he became disturbed by a scientist's seemingly endless pursuit of irrelevant details in the course of an experiment, and criticized this as being as pointless as grabbing beans out of a pot, recording the numbers, and then analyzing the results. Later that day, after he had gone home, his simile began to intrigue him, and he asked himself whether it would really be pointless to count beans gathered in such a random manner. Another man might well have dismissed this as an idle fancy, but to Whitney an opportunity to conduct an experiment was not to be overlooked. Accordingly, he set a pot of beans beside his bed, and for several days each night before retiring he would take as many beans as he could grasp in one hand and make a note of how many were in the handful. After several days had passed he was intrigued to find that the results were not as unrewarding as he had expected. He found that each handful contained more beans than the one before, indicating that with practice he was learning to grasp more and more beans. This might be called research in morphology, the science of animal structure, he mused. My hand was becoming webbed  so I said to myself: never label a real experiment useless, it may reveal something unthought of but worth knowing.

Our atom of carbon enters the leaf, colliding with other innumerable (but here useless) molecules of nitrogen and oxygen. It adheres to a large and complicated molecule that activates it, and simultaneously receives the decisive message from the sky, in the flashing form of a packet of solar light; in an instant, like an insect caught by a spider, it is separated from its oxygen, combined with hydrogen and (one thinks) phosphous, and finally inserted in a chain, whether long or short does not matter, but it is the chain of life. All this happens swiftly, in silence, at the temperature and pressure of the atmosphere, and gratis: dear colleagues, when we learn to do likewise we will be sicut Deus [like God], and we will have also solved the problem of hunger in the world.

Levi Primo and Raymond Rosenthal (trans.), The Periodic Table (1975, 1984), 227-228. In this final section of his book, Levi imagines the life of a carbon atom. He calls this his first literary dream. It came to him at Auschwitz.

Several of my young acquaintances are in their graves who gave promise of making happy and useful citizens and there is no question whatever that cigarettes alone were the cause of their destruction. No boy living would commence the use of cigarettes if he knew what a useless, soulless, worthless thing they would make of him.

The acquirements of science may be termed the armour of the mind; but that armour would be worse than useless, that cost us all we had, and left us nothing to defend. 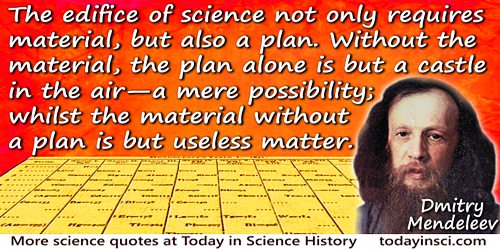 The edifice of science not only requires material, but also a plan. Without the material, the plan alone is but a castle in the aira mere possibility; whilst the material without a plan is but useless matter.

In The Principles of Chemistry (1891), Vol. 1, preface, footnote, ix, as translated from the Russian 5th edition by George Kamensky, edited by A. J. Greenaway.

The primary aim, object, and purpose of consciousness is control. Consciousness in a mere automaton is a useless and unnecessary epiphenomenon.

Underneath his sweetness and gentleness was the heat of a volcano. [Michael Faraday] was a man of excitable and fiery nature; but through high self-discipline he had converted the fire into a central glow and motive power of life, instead of permitting it to waste itself in useless passion.