A fire-mist and a planet,
A crystal and a cell,
A jellyfish and a saurian,
And caves where the cavemen dwell;
Then a sense of law and beauty,
And a face turned from the clod
Some call it Evolution,
And others call it God.

A person by study must try to disengage the subject from useless matter, and to seize on points capable of improvement. ... When subjects are viewed through the mists of prejudice, useful truths may escape.

In An Essay on Aërial Navigation, With Some Observations on Ships (1844), 80.

Firefly meteorites blazed against a dark background, and sometimes the lightning was frighteningly brilliant. Like a boy, I gazed open-mouthed at the fireworks, and suddenly, before my eyes, something magical occurred. A greenish radiance poured from Earth directly up to the station, a radiance resembling gigantic phosphorescent organ pipes, whose ends were glowing crimson, and overlapped by waves of swirling green mist.
Consider yourself very lucky, Vladimir, I said to myself, to have watched the northern lights.

Go to yon tower, where busy science plies
Her vast antennae, feeling through the skies
That little vernier on whose slender lines
The midnight taper trembles as it shines,
A silent index, tracks the planets march
In all their wanderings through the ethereal arch;
Tells through the mist where dazzled Mercury burns,
And marks the spot where Uranus returns.

From poem, pronounced to the Boston Mercantile Library Association (14 Oct, 1846), published as Urania: A Rhymed Lesson (1846), 9-10. [Note: This is too often seen online attributed incorrectly to Samuel Pierpont Langley, who quoted several lines from the poem in his New Astronomy (1888), without naming its actual original author. Webmaster]

I am nothing more than a single narrow gasping lung, floating over the mists and summits.

In the study of ideas, it is necessary to remember that insistence on hard-headed clarity issues from sentimental feeling, as it were a mist, cloaking the perplexities of fact. Insistence on clarity at all costs is based on sheer superstition as to the mode in which human intelligence functions. Our reasonings grasp at straws for premises and float on gossamers for deductions.

Mere poets are sottish as mere drunkards are, who live in a continual mist, without seeing or judging anything clearly. A man should be learned in several sciences, and should have a reasonable, philosophical and in some measure a mathematical head, to be a complete and excellent poet.

Newton found that a star, examined through a glass tarnished by smoke, was diminished into a speck of light. But no smoke ever breathed so thick a mist as envy or detraction.

October 9, 1863
Always, however great the height of the balloon, when I have seen the horizon it has roughly appeared to be on the level of the car though of course the dip of the horizon is a very appreciable quantity or the same height as the eye. From this one might infer that, could the earth be seen without a cloud or anything to obscure it, and the boundary line of the plane approximately the same height as the eye, the general appearance would be that of a slight concavity; but I have never seen any part of the surface of the earth other than as a plane.
Towns and cities, when viewed from the balloon are like models in motion. I shall always remember the ascent of 9th October, 1863, when we passed over London about sunset. At the time when we were 7,000 feet high, and directly over London Bridge, the scene around was one that cannot probably be equalled in the world. We were still so low as not to have lost sight of the details of the spectacle which presented itself to our eyes; and with one glance the homes of 3,000,000 people could be seen, and so distinct was the view, that every large building was easily distinguishable. In fact, the whole of London was visible, and some parts most clearly. All round, the suburbs were also very distinct, with their lines of detached villas, imbedded as it were in a mass of shrubs; beyond, the country was like a garden, its fields, well marked, becoming smaller and smaller as the eye wandered farther and farther away.
Again looking down, there was the Thames, throughout its whole length, without the slightest mist, dotted over its winding course with innumerable ships and steamboats, like moving toys. Gravesend was visible, also the mouth of the Thames, and the coast around as far as Norfolk. The southern shore of the mouth of the Thames was not so clear, but the sea beyond was seen for many miles; when at a higher elevation, I looked for the coast of France, but was unable to see it. On looking round, the eye was arrested by the garden-like appearance of the county of Kent, till again London claimed yet more careful attention.
Smoke, thin and blue, was curling from it, and slowly moving away in beautiful curves, from all except one part, south of the Thames, where it was less blue and seemed more dense, till the cause became evident; it was mixed with mist rising from the ground, the southern limit of which was bounded by an even line, doubtless indicating the meeting of the subsoils of gravel and clay. The whole scene was surmounted by a canopy of blue, everywhere free from cloud, except near the horizon, where a band of cumulus and stratus extended all round, forming a fitting boundary to such a glorious view.
As seen from the earth, the sunset this evening was described as fine, the air being clear and the shadows well defined; but, as we rose to view it and its effects, the golden hues increased in intensity; their richness decreased as the distance from the sun increased, both right and left; but still as far as 90º from the sun, rose-coloured clouds extended. The remainder of the circle was completed, for the most part, by pure white cumulus of well-rounded and symmetrical forms.
I have seen London by night. I have crossed it during the day at the height of four miles. I have often admired the splendour of sky scenery, but never have I seen anything which surpassed this spectacle. The roar of the town heard at this elevation was a deep, rich, continuous sound the voice of labour. At four miles above London, all was hushed; no sound reached our ears.

On motionless wing they emerge from the lifting mists, sweep a final arc of sky, and settle in clangorous descending spirals to their feeding grounds. A new day has begun on the crane marsh.

Physical investigation, more than anything besides, helps to teach us the actual value and right use of the Imaginationof that wondrous faculty, which, left to ramble uncontrolled, leads us astray into a wilderness of perplexities and errors, a land of mists and shadows; but which, properly controlled by experience and reflection, becomes the noblest attribute of man; the source of poetic genius, the instrument of discovery in Science, without the aid of which Newton would never have invented fluxions, nor Davy have decomposed the earths and alkalies, nor would Columbus have found another Continent. 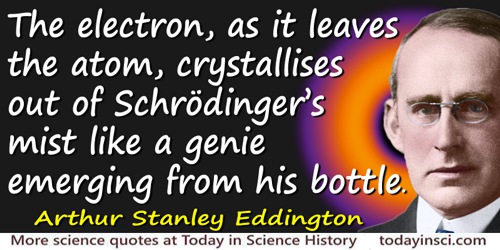 The electron, as it leaves the atom, crystallises out of Schrödingers mist like a genie emerging from his bottle.

The last few meters up to the summit no longer seem so hard. On reaching the top, I sit down and let my legs dangle into space. I dont have to climb anymore. I pull my camera from my rucksack and, in my down mittens, fumble a long time with the batteries before I have it working properly. Then I film Peter. Now, after the hours of torment, which indeed I didnt recognize as torment, now, when the monotonous motion of plodding upwards is at an end, and I have nothing more to do than breathe, a great peace floods my whole being. I breathe like someone who has run the race of his life and knows that he may now rest forever. I keep looking all around, because the first time I didnt see anything of the panorama I had expected from Everest, neither indeed did I notice how the wind was continually chasing snow across the summit. In my state of spiritual abstraction, I no longer belong to myself and to my eyesight. I am nothing more than a single, narrow, gasping lung, floating over the mists and the summits.

There rolls the deep where grew the tree.
O earth, what changes hast thou seen!
There where the long street roars, hath been
The stillness of the central sea.
The hills are shadows, and they flow
From form to form, and nothing stands;
They melt like mist, the solid lands,
Like clouds they shape themselves and go.

There was no instant when a mist of plankton  was not swirling in the path of the beam [of the bathysphere].

As quoted by Rachel Carson in The Sea Around Us (1950, 2003), 62. Carson states that in his bathysphere descent, more than a quarter of a mile down, Beebe reported aggregations of living things as thick as I have ever seen them. At half a milethe deepest descent of the bathysphereDr. Beebe recalled the mist of plankton.

When the morning breezes blow toward the town at sunrise, if they bring with them mists from marshes and, mingled with the mist, the poisonous breath of the creatures of the marshes to be wafted into the bodies of the inhabitants, they will make the site unhealthy.