Thomasina: Every week I plot your equations dot for dot, xâ€™s against yâ€™s in all manner of algebraical relation, and every week they draw themselves as commonplace geometry, as if the world of forms were nothing but arcs and angles. Godâ€™s truth, Septimus, if there is an equation for a curve like a bell, there must be an equation for one like a bluebell, and if a bluebell, why not a rose? Do we believe nature is written in numbers?
Septimus: We do.
Thomasina: Then why do your shapes describe only the shapes of manufacture?
Septimus: I do not know.
Thomasina: Armed thus, God could only make a cabinet.

And from this such small difference of eight minutes [of arc] it is clear why Ptolemy, since he was working with bisection [of the linear eccentricity], accepted a fixed equant pointâ€¦ . For Ptolemy set out that he actually did not get below ten minutes [of arc], that is a sixth of a degree, in making observations. To us, on whom Divine benevolence has bestowed the most diligent of observers, Tycho Brahe, from whose observations this eight-minute error of Ptolemyâ€™s in regard to Mars is deduced, it is fitting that we accept with grateful minds this gift from God, and both acknowledge and build upon it. So let us work upon it so as to at last track down the real form of celestial motions (these arguments giving support to our belief that the assumptions are incorrect). This is the path I shall, in my own way, strike out in what follows. For if I thought the eight minutes in [ecliptic] longitude were unimportant, I could make a sufficient correction (by bisecting the [linear] eccentricity) to the hypothesis found in Chapter 16. Now, because they could not be disregarded, these eight minutes alone will lead us along a path to the reform of the whole of Astronomy, and they are the matter for a great part of this work.

I had observed that there were different lines exhibited in the spectra of different metals when ignited in the voltaic arc; and if I had had any reasonable amount of wit I ought to have seen the converse, viz., that by ignition different bodies show in their spectral lines the materials of which they are formed. If that thought had occured to my mind, I should have discovered the spectroscope before Kirchoff; but it didnâ€™t. 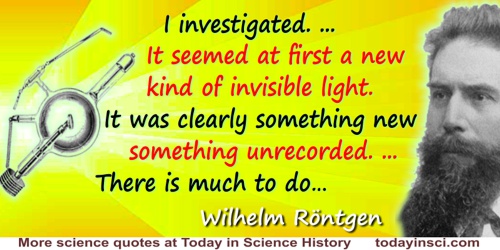 I was working with a Crookes tube covered by a shield of black cardboard. A piece of barium platino-cyanide paper lay on the bench there. I had been passing a current through the tube, and I noticed a peculiar black line across the paper. â€¦
The effect was one which could only be produced in ordinary parlance by the passage of light. No light could come from the tube because the shield which covered it was impervious to any light known even that of the electric arc. â€¦
I did not think; I investigated. â€¦
I assumed that the effect must have come from the tube since its character indicated that it could come from nowhere else. â€¦ It seemed at first a new kind of invisible light. It was clearly something new something unrecorded. â€¦
There is much to do, and I am busy, very busy. [Describing to a journalist the discovery of X-rays that he had made on 8 Nov 1895.]

In experimenting on the arc, my aim was not so much to add to the large number of isolated facts that had already been discovered, as to form some idea of the bearing of these upon one another, and thus to arrive at a clear conception of what takes place in each part of the arc and carbons at every moment. The attempt to correlate all the known phenomena, and to bind them together into one consistent whole, led to the deduction of new facts, which, when duly tested by experiment, became parts of the growing body, and, themselves, opened up fresh questions, to be answered in their turn by experiment.

In The Electric Arc (1902), Preface, iii. Ayrton described the growth of her published work on the electric arc, from a series of articles in The Electrician in 1895-6, to the full book, which â€śhas attained to its present proportions almost with the growth of an organic body.â€ť

Marxists are more right than wrong when they argue that the problems scientists take up,. the way they go about solving them, and even the solutions they arc inclined to accept, arc conditioned by the intellectual, social, and economic environments in which they live and work.

In Mankind Evolving: The Evolution of the Human Species, 128. As cited in Ted Woods & Alan Grant, Reason in Revolt - Dialectical Philosophy and Modern Science (2003), Vol. 2, 183.

Mathematics is an infinity of flexibles forcing pure thought into a cosmos. It is an arc of austerity cutting realms of reason with geodesic grandeur.

On motionless wing they emerge from the lifting mists, sweep a final arc of sky, and settle in clangorous descending spirals to their feeding grounds. A new day has begun on the crane marsh.

The generalized theory of relativity has furnished still more remarkable results. This considers not only uniform but also accelerated motion. In particular, it is based on the impossibility of distinguishing an acceleration from the gravitation or other force which produces it. Three consequences of the theory may be mentioned of which two have been confirmed while the third is still on trial: (1) It gives a correct explanation of the residual motion of forty-three seconds of arc per century of the perihelion of Mercury. (2) It predicts the deviation which a ray of light from a star should experience on passing near a large gravitating body, the sun, namely, 1".7. On Newton's corpuscular theory this should be only half as great. As a result of the measurements of the photographs of the eclipse of 1921 the number found was much nearer to the prediction of Einstein, and was inversely proportional to the distance from the center of the sun, in further confirmation of the theory. (3) The theory predicts a displacement of the solar spectral lines, and it seems that this prediction is also verified.

Tonight, the moon came out, it was nearly full.
Way down here on earth, I could feel itâ€™s pull.
The weight of gravity or just the lure of life,
Made me want to leave my only home tonight.
Iâ€™m just wondering how we know where we belong
Is it in the arc of the moon, leaving shadows on the lawn
In the path of fireflies and a single bird at dawn
Singing in between here and gone

In Letter to La Condamine, whose surveying expedition (after Newtonâ€™s death) had measured the arc at the equator. As Newton had calculated, the Earth was a flattened sphere, due to the effects of rotation and gravitational pull. Roughly translates as, â€śYou have found by prolonged difficulty / What Newton found without leaving home.â€ť In The Royal Society Newton Tercentenary Celebrations: 15-19 July 1946 (1946), 15. [Newton was born in 1642; the tercentenary celebration was delayed by WW II â€”Webmaster.]