By destroying the biological character of phenomena, the use of averages in physiology and medicine usually gives only apparent accuracy to the results. From our point of view, we may distinguish between several kinds of averages: physical averages, chemical averages and physiological and pathological averages. If, for instance, we observe the number of pulsations and the degree of blood pressure by means of the oscillations of a manometer throughout one day, and if we take the average of all our figures to get the true or average blood pressure and to learn the true or average number of pulsations, we shall simply have wrong numbers. In fact, the pulse decreases in number and intensity when we are fasting and increases during digestion or under different influences of movement and rest; all the biological characteristics of the phenomenon disappear in the average. Chemical averages are also often used. If we collect a man's urine during twenty-four hours and mix all this urine to analyze the average, we get an analysis of a urine which simply does not exist; for urine, when fasting, is different from urine during digestion. A startling instance of this kind was invented by a physiologist who took urine from a railroad station urinal where people of all nations passed, and who believed he could thus present an analysis of average European urine! Aside from physical and chemical, there are physiological averages, or what we might call average descriptions of phenomena, which are even more false. Let me assume that a physician collects a great many individual observations of a disease and that he makes an average description of symptoms observed in the individual cases; he will thus have a description that will never be matched in nature. So in physiology, we must never make average descriptions of experiments, because the true relations of phenomena disappear in the average; when dealing with complex and variable experiments, we must study their various circumstances, and then present our most perfect experiment as a type, which, however, still stands for true facts. In the cases just considered, averages must therefore be rejected, because they confuse, while aiming to unify, and distort while aiming to simplify. Averages are applicable only to reducing very slightly varying numerical data about clearly defined and absolutely simple cases.

DIAGNOSIS, n. A physician's forecast of disease by the patient's pulse and purse. 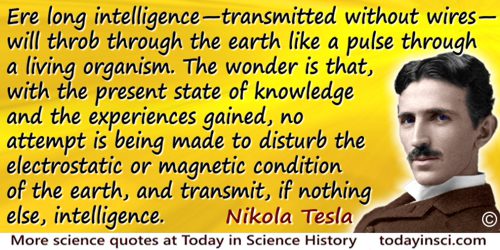 Ere long intelligencetransmitted without wireswill throb through the earth like a pulse through a living organism. The wonder is that, with the present state of knowledge and the experiences gained, no attempt is being made to disturb the electrostatic or magnetic condition of the earth, and transmit, if nothing else, intelligence.

I have divers times examined the same matter (human semen) from a healthy man... not from a sick man... nor spoiled by keeping... for a long time and not liquefied after the lapse of some time... but immediately after ejaculation before six beats of the pulse had intervened; and I have seen so great a number of living animalcules... in it, that sometimes more than a thousand were moving about in an amount of material the size of a grain of sand... I saw this vast number of animalcules not all through the semen, but only in the liquid matter adhering to the thicker part.

If I were a physician I would try my patients thus. I would wheel them to a window and let Nature feel their pulse. It will soon appear if their sensuous existence is sound. The sounds are but the throbbing of some pulse in me.

Inequality of the pulse is in most cases accompanied by irregularity; one hardly ever finds a regular unequal pulse.

Take an arrow, and hold it in flame for the space of ten pulses, and when it cometh forth you shall find those parts of the arrow which were on the outsides of the flame more burned, blacked, and turned almost to coal, whereas the midst of the flame will be as if the fire had scarce touched it. This is an instance of great consequence for the discovery of the nature of flame; and sheweth manifestly, that flame burneth more violently towards the sides than in the midst.

Observing, but not with the knowledge, that a flame burns at its outside in contact with air, and there is no combustion within the flame which is not mixed with air. In Sylva Sylvarum; or a Natural History in Ten Centuries (1627), Century 1, Experiment 32. Collected in The Works of Francis Bacon (1740), Vol 3, 9.

The basic symptoms which occur in pneumonia and which are never lacking are acute fever, sticking pain in the side, short rapid breaths, serrated pulse, and cough, mostly with sputum.

The bomb took forty-five seconds to drop thirty thousand feet to its detonation point, our three parachute gauges drifting down above. For half that time we were diving away in a two-g turn. Before we leveled off and flew directly away, we saw the calibration pulses that indicated our equipment was working well. Suddenly a bright flash lit the compartment, the light from the explosion reflecting off the clouds in front of us and back through the tunnel. The pressure pulse registered its N-shaped wave on our screen, and then a second wave recorded the reflection of the pulse from the ground. A few moments later two sharp shocks slammed the plane.

The earth itself assures us it is a living entity. Deep below surface one can hear its slow pulse, feel its vibrant rhythm. The great breathing mountains expand and contract. The vast sage desert undulates with almost imperceptible tides like the oceans. From the very beginning, throughout all its cataclysmic upthrusts and deep sea submergences, the planet Earth seems to have maintained an ordered rhythm.

The pulse of a newborn during the neonatal period is very rapid  the pulse of old people is rather slow  the pulse is fullest and strongest in the prime years of youth.

The sign which points to strong, unfailing health is a uniform pulse which is also totally regular.

The so-called science of poll-taking is not a science at all but mere necromancy. People are unpredictable by nature, and although you can take a nation's pulse, you can't be sure that the nation hasn't just run up a flight of stairs, and although you can take a nation's blood pressure, you cant be sure that if you came back in twenty minutes youd get the same reading. This is a damn fine thing. .

These changesthe more rapid pulse, the deeper breathing, the increase of sugar in the blood, the secretion from the adrenal glandswere very diverse and seemed unrelated. Then, one wakeful night, after a considerable collection of these changes had been disclosed, the idea flashed through my mind that they could be nicely integrated if conceived as bodily preparations for supreme effort in flight or in fighting. Further investigation added to the collection and confirmed the general scheme suggested by the hunch.

They were in orbit around the planet now, and its giant curving bulk loomed so huge that he could see nothing else, nothing but the bands and swirls of clouds that raced fiercely across Jupiters face. The clouds shifted and flowed before his eyes, spun into eddies the size of Asia, moved and throbbed and pulsed like living creatures. Lightning flashed down there, sudden explosions of light that flickered back and forth across the clouds, like signalling lamps.

We can see that there is only one substance in the universe and that man is the most perfect one. He is to the ape and the cleverest animals what Huygens's planetary clock is to one of Julien Leroy's watches. If it took more instruments, more cogs, more springs to show or tell the time, if it took Vaucanson more artistry to make his flautist than his duck, he would have needed even more to make a speaking machine, which can no longer be considered impossible, particularly at the hands of a new Prometheus. Thus, in the same way, nature needed more artistry and machinery to construct and maintain a machine which could continue for a whole century to tell all the beats of the heart and the mind; for we cannot tell the time from the pulse, it is at least the barometer of heat and liveliness, from which we can judge the nature of the soul.

When a doctor arrives to attend some patient of the working class, he ought not to feel his pulse the moment he enters, as is nearly always done without regard to the circumstances of the man who lies sick; he should not remain standing while he considers what he ought to do, as though the fate of a human being were a mere trifle; rather let him condescend to sit down for awhile.

When they [radio astronomers] grew weary at their electronic listening posts. When their eyes grew dim with looking at unrevealing dials and studying uneventful graphs, they could step outside their concrete cells and renew their dull spirits in communion with the giant mechanism they commanded, the silent, sensing instrument in which the smallest packets of energy, the smallest waves of matter, were detected in their headlong, eternal flight across the universe. It was the stethoscope with which they took the pulse of the all and noted the birth and death of stars, the probe which, here on an insignificant planet of an undistinguishable star on the edge of its galaxy, they explored the infinite.

With every throb of the climatic pulse which we have felt in Central Asia,, the centre of civilisation has moved this way and that. Each throb has sent pain and decay to the lands whose day was done, life and vigour to those whose day was yet to be.